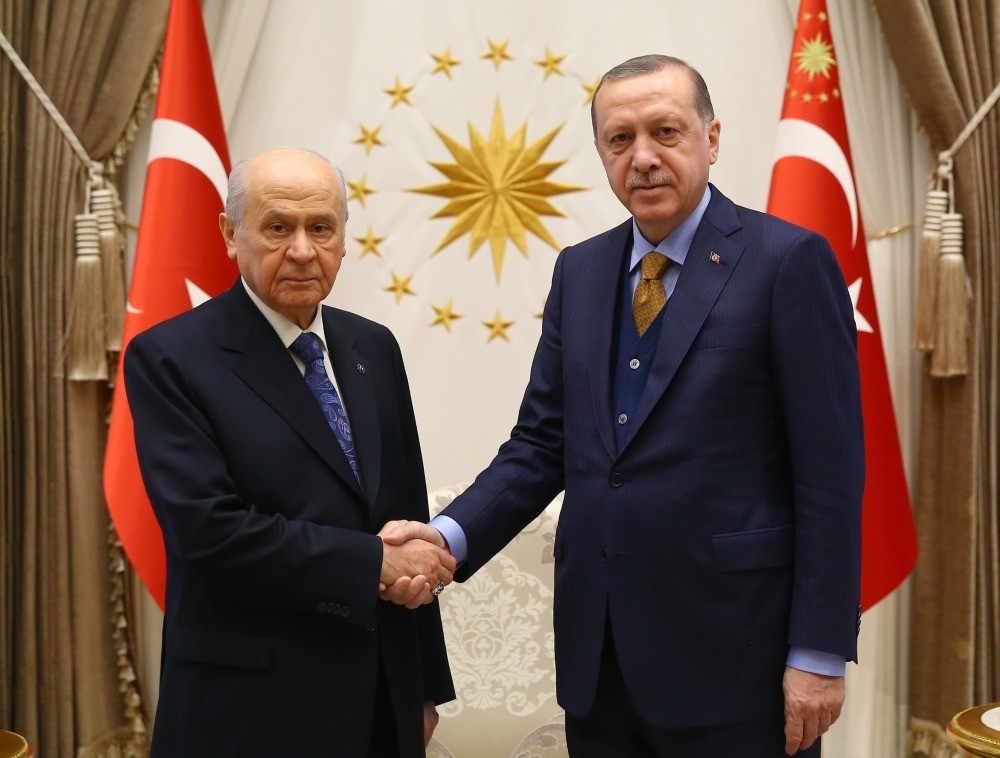 President Erdou011fan shakes hand with MHP Chairman Devlet Bahu00e7eli ahead of their 35-minute meeting at the Beu015ftepe Presidential Complex in Ankara yesterday.
by Daily Sabah Jan 11, 2018 12:00 am

After the meeting between Erdoğan and MHP Chairman Bahçeli, the expected alliance between the AK Party and the opposition MHP will see the MHP support to Erdoğan as a joint candidate in the 2019 presidential election

Ongoing debates about a possible alliance between the Justice and Development Party (AK Party) and the opposition Nationalist Movement Party (MHP) was put to rest Wednesday following the meeting between President Recep Tayyip Erdoğan and MHP Chairman Devlet Bahçeli at the Presidential Palace complex, indicating that the two parties support President Erdoğan as their candidate in the upcoming presidential elections next year. Presidential sources said that during the meeting between the two party leaders, which began at 4 p.m. local time and lasted about 35 minutes, Erdoğan thanked the MHP leader for his "national" stance and discussed the election alliance and the adjustment laws for the new system.

According to the sources, a working group will be established to develop the alliance model between the two parties to further institutionalize the merge, which will directly report to the party leaders. The discussions on the alliance model will be confidential and not shared with the public. Talks concerning the alliance had emerged after the failed July 15 coup attempt. Bahçeli had said his party would take a stance in line with Turkey's national interests.

In the months following the July 15 coup attempt, a joint effort by the AK Party and MHP evolved into an alliance to amend the Constitution, and the two parties campaigned for the April 16 constitutional amendment package that switched the country's governmental system to an executive presidential system, which is scheduled to take effect with the presidential election in November 2019.

Although speculation hinted at the alliance, the parties' leaderships had not officially announced the partnership, although they had made remarks saying one was welcome.

On Monday, Bahçeli told reporters in Ankara that the MHP will not nominate a candidate and instead support Erdoğan's re-election. Erdoğan responded to Bahçeli's remarks, saying they were welcomed and appreciated.

Bahçeli has called it a "people's alliance" while Erdoğan termed it a "domestic and national alliance."

The new system is expected to bring parties together to form alliances to reach the required 50+1 percent of votes needed for their presidential candidate to be elected. Analysts have suggested that smaller parties will be forced to merge with larger parties to maintain their position in the run up to the presidential election.

An AK Party-MHP alliance would bring together nationalist voters with the center-right, making it one of the strongest alliances in Turkey's domestic politics.

Many of the founding members of the AK Party were political figures who parted ways with the Virtue Party, which stood on the conservative pole of Turkey's political spectrum. However, the AK Party has been defined as a center-right party, following the footsteps of the Homeland Party (ANAP) of former President Turgut Özal and also the Democrat Party (DP) of former Prime Minister Adnan Menderes.

The MHP, on the other hand, was formed in 1969 by retired Colonel Alparslan Türkeş, who had become the leader of the far-right Republican Villagers Nation Party (CKMP) in 1965. The party mainly followed a pan-Turkist and ultranationalist political agenda throughout the latter half of the 20th century, but later moderated its views under the leadership of Bahçeli, who took over after Türkeş's death in 1997.

The MHP received as much as 18 percent of the vote in the 1999 parliamentary election but slipped below the 10 percent electoral threshold with 9.5 percent in 2002.

Another nationalist party, which also has conservative leanings, the Great Union Party (BBP), has also announced support for an AK Party-MHP alliance.

BBP Chairman Mustafa Destici said yesterday that they support the alliance between the AK Party and the MHP, expressing their happiness to see conservatives united.

Adding that they want the Felicity Party (SP) to join the alliance as well, Destici said that from the beginning, they have supported election alliances being legal. He further indicated that although they support the alliance, the BBP has not made this an official statement yet.

The SP has been critical of the AK Party government, but it is not certain whether they will announce their own candidate or support one that would emerge under the Republican People's Party (CHP) as an opposition candidate.

Opposition yet to name candidate

Other opposition parties in Parliament have not yet announced their candidates for the presidential election.

The CHP previously announced that the candidate for the upcoming presidential election would be a figure from within the party. However, the party has not announced the name of their candidate. Party officials have said that the candidate will be a figure that will also be appealing to the bases of smaller opposition parties, as well. How this will be established remains unknown, as many of the smaller opposition parties are ideologically distinct from each other.

On a television program in late December, CHP Chairman Kemal Kılıçdaroğlu said he might apply for candidacy for the 2019 presidential election, although he seemed reluctant to declare his intention: "I may be. We will discuss it in the party."

Kılıçdaroğlu has often been criticized for not propelling himself to the political forefront and often remaining in the background in critical elections. He did not enter the 2014 presidential election. Instead, the CHP nominated Ekmeleddin İhsanoğlu, the former head of the Organisation of Islamic Cooperation (OIC), who entered the election as a joint candidate also supported by the MHP, the DP, the Democratic Left Party (DSP), the BBP, the Independent Turkey Party (BTP) and several other minor parties, but garnered 38.4 percent of the vote, coming in second after Erdoğan.

Political circles have often mentioned the possibility of the Peoples' Democratic Party (HDP) supporting the CHP candidate as well. In the last election, the HDP proposed its own candidate, Co-Chair Selahattin Demirtaş, who came third, with 9.76 percent of the vote.