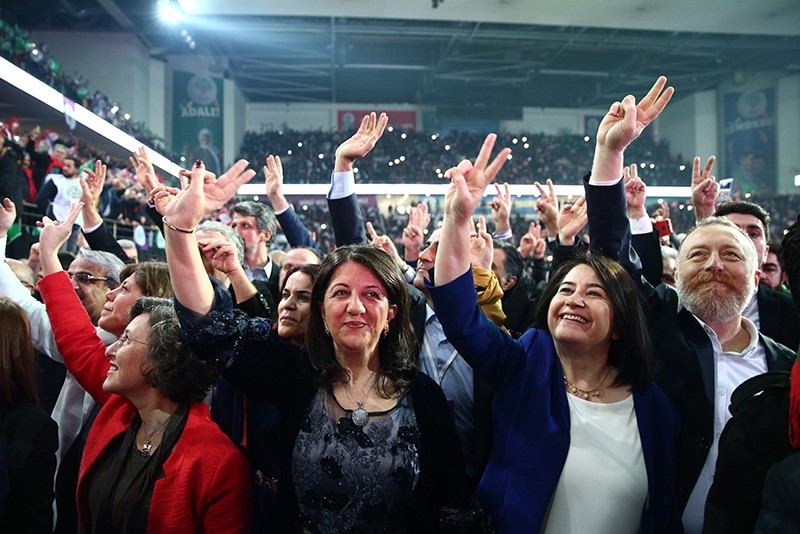 The pro-PKK Peoples' Democratic Party (HDP) will elect two new leaders on Sunday, one of whom will replace its jailed co-chief Selahattin Demirtaş, ahead of elections in 2019.

At the HDP congress on Sunday, the party will choose a man to replace Demirtaş and a woman to replace its other co-leader Serpil Kemalbay, who took over from another incarcerated former leader, Figen Yüksekdağ.

The party says it always has a woman and man in leadership positions in the interests of equality.

Sezai Temelli, a former MP, and Pervin Buldan, who is serving in parliament, have been nominated to become the new co-leaders, the party said this week.

Demirtaş is the best-known face of the HDP and he was one of three presidential candidates in 2014 elections, receiving 9.76 percent of the votes. Capitalizing on this success during the reconciliation period, HDP appealed to voters outside the pro-PKK Kurdish voter base, including conservative Kurds, non-Kurdish leftists and liberals. Ahead of the 2015 elections, the Peace and Democracy Party (BDP), the latest of pro-PKK political parties, formed an alliance with several other far-left, liberal and green groups in the HDP, which managed to pass the threshold with 13.7 and 10.7 percent of the votes in the June 7 and November 1, 2015 elections, respectively.

The HDP, however, suffered greatly from public backlash after it failed to sever its ties with the PKK terror organization, which renewed its armed campaign against the Turkish state in July 2015 after a two-year long reconciliation period. Since then, 1,200 security officials and civilians have been killed in attacks and suicide bombings, in addition to extensive damage to cities, towns and infrastructure in Turkey's southeast. More than 10,000 PKK militants were also killed or captured in operations during this period. Ensuing investigations against the party over its deputies' and municipalities' links with the PKK also damaged the party organization and its reputation, reducing its ability to conduct a thoroughly nationwide policy.

Demirtaş and Yüksekdağ were among a dozen HDP deputies detained in November 2016 as part of a crackdown on the PKK terror organization amid the state of emergency that followed the Gülenist Terror Group (FETÖ) linked coup attempt on July 15, 2016. Nine HDP lawmakers remain in jail, whereas seven of its lawmakers losing their MP status, mainly due to absence, since they went abroad due to terror charges, or convictions in terror cases. The party had 59 MPs in late 2015.

Prior to her role in the HDP, Yüksekdağ was the chairperson for the Socialist Party of the Oppressed (ESP), which is often described as the legal face of the Marxist-Leninist Communist Party (MLKP) terrorist organization. Yüksekdağ was stripped of her lawmaker status in February 2017 after her conviction for spreading terror propaganda and she stepped down as HDP co-leader in May last year.

Demirtaş, 44, has been behind bars since November 2016, detained on terrorism charges, and faces a possible 142-year prison sentence. In January, he appeared before an Istanbul court on separate charges of insulting President Recep Tayyip Erdoğan, in which he was convicted, whereas in a separate trial, he was acquitted of charges of insulting the Interior Minister Süleyman Soylu.

Last month, Demirtaş, said he would step down from his post, fearing he would likely remain imprisoned.

"Even if Mr. Demirtaş... is or isn't the co-leader, he is an important figure in political life and he will continue to be involved in politics under any condition," HDP's spokesman Ayhan Bilgen, who also spent eight months in pre-trial detention last year over alleged PKK links, told AFP.

In addition to the ongoing pressure due to terror links, the HDP also opposes Turkey's ongoing Operation Olive Branch to clear PKK-affiliated People's Protection Units (YPG) from northern Syria's Afrin region, although the operation itself is being backed by a great margin of public and political parties. Despite opposition from Kurds, Arabs and Turkmens to Democratic Unity Party (PYD) rule in northern Syria, and its armed wing YPG's grave human rights violations against political opponents and non-Kurdish ethnic groups, the party says the operation is an "invasion" that targets Kurds "as a people."

Ankara considers the YPG as a terrorist offshoot of the PKK, which has fought the Turkish state since 1978 in a bloody war that has caused over 50,000 lives.

The left-wing party is also at odds with its principal beliefs since the PYD and YPG-dominated Syrian Democratic Forces (SDF) is the main ally of the U.S in the fight against the Daesh terrorist group in Syria. The SDF currently controls almost one-fourth of Syrian territory, in addition to almost all of its oil and gas fields.

Since the beginning of Operation Olive Branch on Jan. 20, authorities made more arrests on spreading terror propaganda. The HDP says 368 of its members had been detained over their opposition to the fighting.

On Friday arrest warrants were also issued for 17 people, including Kemalbay, over calls for protests against Ankara's Syria operation.