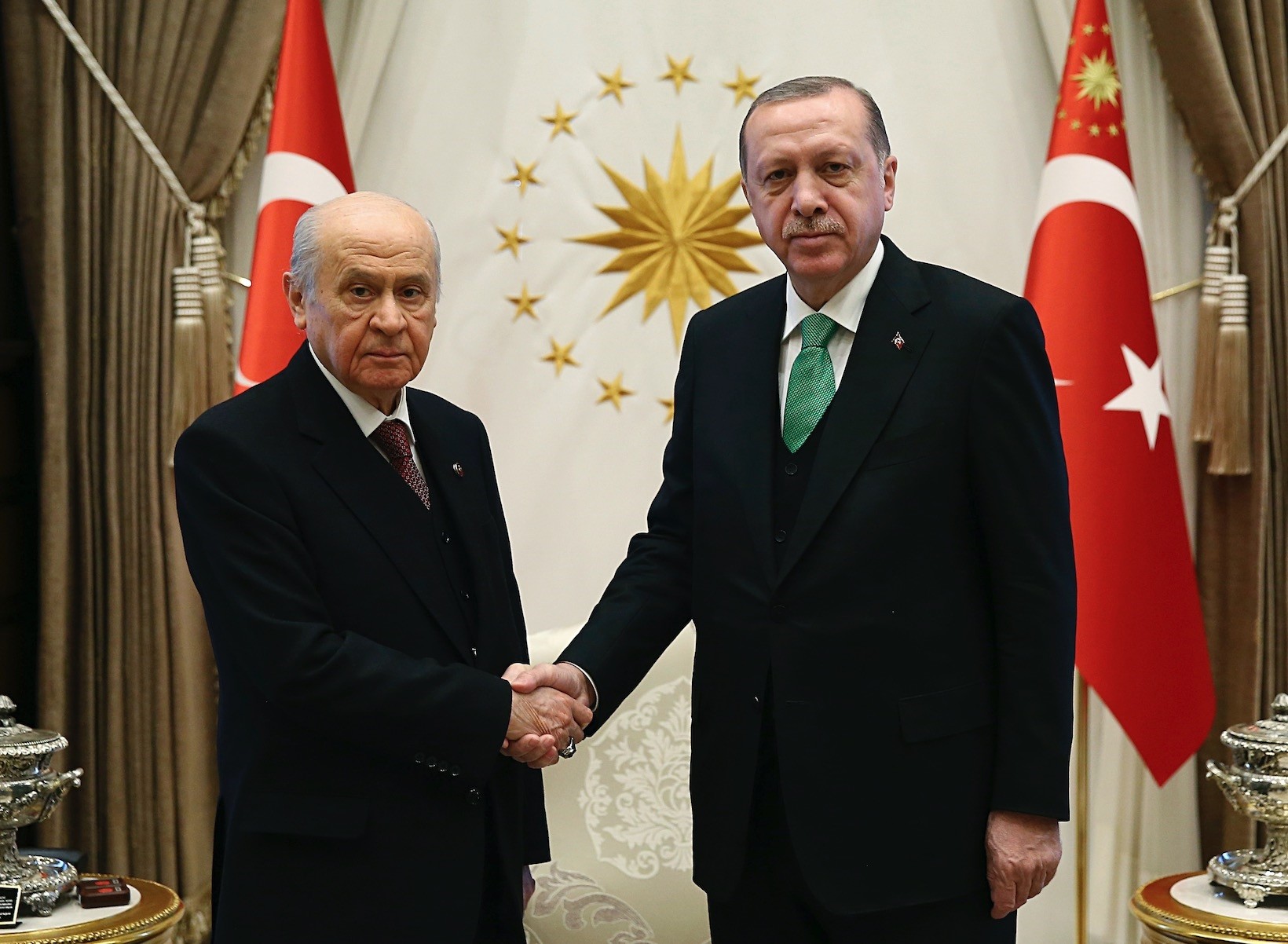 After extensive negotiations, the ruling AK Party and opposition MHP have agreed on the terms for forming an election alliance, and a 26-article bill regarding general elections laws that allow a joint candidate in elections will be submitted to Parliament

Discussing the terms of the alliance in a 45-minute meeting on Sunday, Erdoğan and Bahçeli were on the same page as parliamentary constitution committee head Mustafa Şentop said after the meeting that all issues have been settled.

Şentop, who has also been in an AK Party committee that negotiated the alliance talks with the MHP, said that the 26-article-bill would be submitted to Parliament tomorrow. Stressing that the AK Party and MHP committees met nine times for a total of nearly 23 hours, Şentop underscored that both chairmen were informed after every meeting and they have been briefed for the last time.

An opportunity for an alliance between the AK Party and the MHP surfaced after MHP Chairman Bahçeli said that his party will not name a candidate for the 2019 presidential election and will support the re-election of President Erdoğan instead. Since then, the two parties have been striving to find common ground to join forces in the 2019 elections. Şentop said that the changes proposed by the AK Party and the MHP are supposed to be in the General Elections laws. According to the proposed changes, he said, any party that wants to join or create an alliance can do so.

Another controversial topic was the election threshold. The national election threshold, which stands at 10 percent right now, will not be lowered. Yet, even if a party remains below 10 percent, but its alliance passes it will be represented in Parliament.

Election security will also be addressed. A change will be made to ensure that citizens can easily inform authorities about possible unrest in polling centers. Previously, only assigned officials in polling centers were able to inform the authorities in the case of any disturbances. Moreover, the head of the balloting committee will have to be a state servant or a retired state servant in line with the new amendment.

Meanwhile, MHP's Deputy Chairman Celal Adan commented on the upcoming 2019 elections, saying that the alliance between the ruling AK Party and MHP named national agreement will gain the majority of the votes.

"The current vote rate of the national agreement is 65 percent," Adan said on Sunday speaking at an event organized by MHP's Sultangazi district. The vice chairman noted, "Now we see that the ones who side with those targeting the unity of the nation will be disappointed in the elections."

Touching on allegations that the MHP seeks self-interest in the alliance formed with the ruling AK Party, Adan ruled out the claims, stressing that the alliance is for the unity of Turkey and the relation between the two parties is not based on interests.

Bahçeli previously said that the underlying reason for the alliance decision is that his party would act in accordance with the Yenikapı spirit, referring to the rally that took place in Istanbul on Aug. 7, 2017, with the participation all of Turkey's main political leaders. That occasion was considered a symbol of political consensus following the July 15, 2016 failed coup.

Adan stated that in the face of growing challenges following the July 15 coup attempt in 2016 and threats posed by the PKK, the MHP has sided with the government elected by the Turkish nation.

On the other hand, there have been rumors that other parties could join the National Agreement alliance. The Felicity Party (SP) was one of them. SP Chairman Temel Karamollaoğlu answered possible alliance rumors after the meeting with President Erdoğan on Feb. 9.

"We have not received any proposal for alliance, but we can talk with anyone if need be," he said.

Karamollaoğlu stressed that they would not refuse an alliance if they were given the authority to determine the candidate.

Additionally, the SP leader underlined that they have been considering putting forward a presidential candidate since the April 16 referendum.

"Our job is difficult. Our base will convince and the ones who give up hope on the CHP, the HDP, the AK Party and the MHP will convince too. It is hard work but not impossible. We will lend a hand to everybody. We are not opposed to hold talks with the government. We need to talk about how our country finds peace and how we overcome our problems," he said, explaining the SP's stance. Reportedly, the Great Unity Party (BBP) might be another party that would be interested in joining the alliance.