MHP, AK Party to join forces for 2019 presidential elections in a 'People's Alliance' 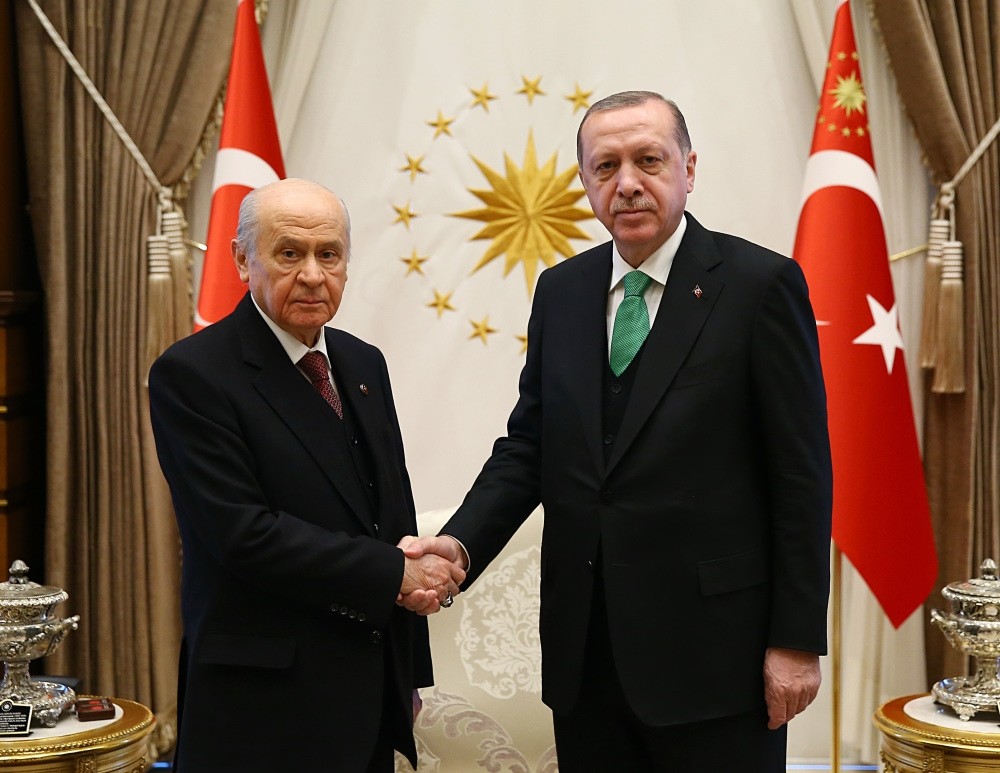 MHP Chairman Bahu00e7eli announced on Jan. 8 that his party will not name a candidate for the 2019 presidential election and will support the re-election of President Erdou011fan instead.
by daily sabah Feb 21, 2018 12:00 am

The AK Party and MHP finalized alliance talks on Sunday to find common ground to join forces for the 2019 elections, calling it the ‘People's Alliance'

The leaders of the ruling Justice and Development Party (AK Party) and opposition Nationalist Movement Party (MHP) have decided to name the alliance between the two parties for the upcoming 2019 elections the "People's Alliance." Following his speech at the AK Party group meeting in Parliament, President Recep Tayyip Erdoğan announced yesterday that the name of the alliance will be the "People's Alliance" as decided by the two party's chairs. In a joint committee, the two parties negotiated the alliance and the party leaders met Sunday to finalize the alliance talks. The leaders agreed on a 26-article bill to be submitted to Parliament. Commenting on the process, MHP Chairman Devlet Bahçeli said the meetings between the MHP and the AK Party were successful and conducted in a candid atmosphere.

"The last meeting of the alliance committee was held on Feb. 14. The committee convened nine times and worked over 22 hours. In the meeting between party chairs on Sunday the agreement has taken its final shape," Bahçeli said, and added that two representatives from the party will inform the public about the details of the alliance on Wednesday. Bahçeli also thanked the members of the committee for their efforts in the process. In relation to the issue, Mustafa Şentop, taking part in alliance committee, said the provisions preventing the alliances have been lifted and changes proposed by the AK Party and the MHP are supposed to be in the General Elections laws.

According to the proposed changes, he said, any party that wants to join or create an alliance can do so.

The AK Party and the MHP decided to form a political alliance for the presidential elections when MHP Chairman Bahçeli announced that his party will not name a candidate for the 2019 presidential elections and will support the re-election of President Erdoğan instead. Since then, the two parties have been striving to find common ground to join forces in the 2019 elections.

Bahçeli previously said the underlying reason for the alliance decision is that his party would act in accordance with the Yenikapı spirit, referring to the rally that took place in Istanbul on Aug. 7, 2017, with the participation of all Turkey's main political leaders. That occasion was considered a symbol of political consensus following the July 15, 2016 failed coup.

A joint committee is formed in an effort to provide a legal basis for the alliance. In the joint committee, Justice Minister Abdülhamit Gül, Parliament constitution committee head Mustafa Şentop and AK Party spokesman Mahir Ünal represented the AK Party, while the MHP was represented by Deputy Secretary-General Mustafa Kalaycı, lawmaker Mehmet Parsak from Afyonkarahisar province and another parliamentarian from Istanbul province, İsmail Faruk Aksu.

Additionally, the 100,000 signatures required for the presidential candidacy will be submitted to the Supreme Electoral Council (YSK).

Election security will also be addressed. A change will be made to ensure that citizens can easily inform the authorities about possible unrest in polling centers. Previously, only assigned officials in polling centers were able to inform the authorities in the case of any disturbances. Moreover, the head of the balloting committee will have to be a state servant or a retired state servant in line with the new amendment.

The Felicity Party (SP) and the Great Union Party (BBP) may also join the alliance, some reports have said.

SP Chairman Temel Karamollaoğlu answered possible alliance rumors after the meeting with President Erdoğan on Feb. 9. "We have not received any proposal for alliance, but we can talk with anyone if need be," he said.

Karamollaoğlu stressed that they would not refuse an alliance if they were given the authority to determine the candidate.

"Our job is difficult. Our base will convince and the ones who give up hope on the CHP [Republican People's Party], the HDP [People's Democratic Party], the AK Party and the MHP will convince too. It is hard work but not impossible. We will lend a hand to everybody. We are not opposed to hold talks with the government. We need to talk about how our country finds peace and how we overcome our problems," he said, explaining the SP's stance.