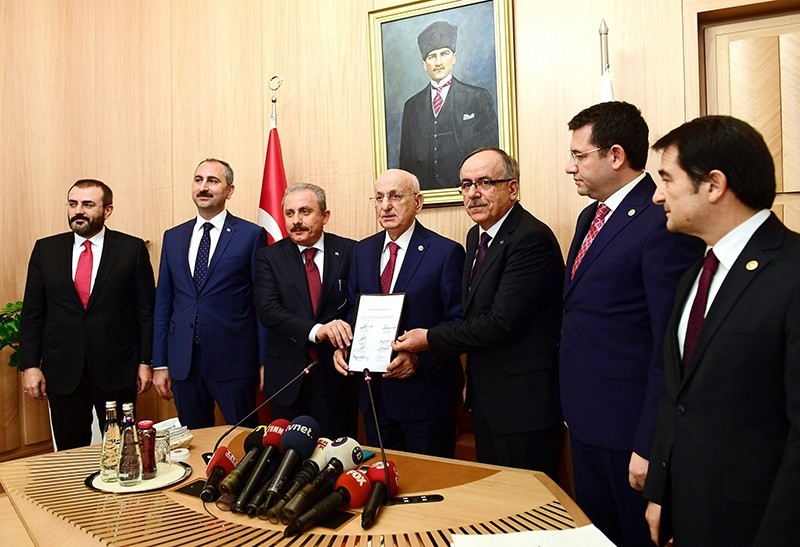 The Justice and Development Party (AK Party) and the Nationalist Movement Party (MHP) Wednesday submitted a 26-article bill to Parliament following weekslong alliance negotiations for the 2019 presidential and parliamentary elections.

The representatives of the committee formed by the two parties to discuss the details of the alliance submitted the bill as the alliance between the AK Party and the MHP gained legal basis, a phenomenon which has been termed the "People's Alliance" by President and AK Party Chairman Recep Tayyip Erdoğan and MHP Chairman Devlet Bahçeli.

With the two parties submitting the bill to pave the way for electoral alliances, a new era has come in Turkish politics. Electoral alliances were brought to the agenda after MHP Chairman Bahçeli said previously that his party would not nominate anyone for the 2019 presidential elections but would support Erdoğan for re-election.

Speaking on the formation of the alliance, Mustafa Şentop, the head of the Constitutional Committee in Parliament, said that their main aim as the alliance commission is to deliver the necessary regulations on the adjustment law.

"In total, a text that consists of 26 articles has changes in 4 laws. There are no regulations on alliance in local elections in this text. Our regulations do not have a restriction on the numbers or parties," he said, adding that the total percentage of the votes that individual parties' in the alliance receive will also be considered in the total vote count for the alliance itself.

Deputy Secretary-General Mustafa Kalaycı, on the other hand, stated that with these regulations, an important step towards democratization in Turkish politics is being taken, creating the legal structure for political parties to join elections via alliances.

The party representatives said that there are also no limits to the number of parties that can join an alliance and that there will be no changes made to the current election system. In addition, there are changes being made to enable, and make it easier, for ill or disabled voters to vote, as well as for security at polling stations.

As the weeks-long talks came to an end, Erdoğan and Bahçeli were briefed. The two leaders met Sunday in a 45-minute meeting and sealed the deal. Reports indicate that parties will be presented with their own names and emblems on ballots, which will be sufficient for citizens to vote for their parties.

Also, parties that forge an alliance will be free to choose between a joint list and separate lists. Another change in the national agreement will be the age to be chosen for deputy and village headmen, which is expected to be lowered from 25 to 18.

The national election threshold, which stands at 10 percent right now, will not be lowered. However, even if a party remains below 10 percent but its alliance passes, it will be represented in Parliament.

Additionally, the 100,000 signatures required for the presidential candidacy will be submitted to the Supreme Electoral Council (YSK).

While there has been an alliance agreed between the MHP and the AK Party on presidential and parliamentary elections in 2019, how this alliance will affect local elections is not yet known.

Meanwhile, Great Union Party (BBP) Chairman Mustafa Destici stressed that there is currently nothing negative about his party joining the alliance. Speaking in a televised interview late Tuesday following his meeting with President Erdoğan on the same day, Destici said everything has been running smoothly for the BBP in terms of alliance talks.

Responding to a question in regards to his meeting with Erdoğan, Destici said he has been stressing from day one that his party would join the alliance. "Everything is moving positively right now in terms of us being in the alliance. There is nothing negative," he declared.

Underlining that the alliance bill will allow multiple parties to form an alliance, Destici said nine parties will be able to form alliances with each other or separately. "The AK Party and the MHP very openly announced their will here. We also very openly announced our will. Therefore, we stand next to this alliance; we support it," he said, adding that the People's Alliance is the most beneficial option for the country.

In response to a question regarding which topics the AK Party and the BBP agree on, Destici did not specify issues. However, Destici said there is no disagreement between the two parties.

On the other hand, there have also been rumors that other parties could join the national agreement alliance. The Felicity Party (SP) was one of them. SP Chairman Temel Karamollaoğlu answered questions on possible alliance rumors after a meeting with President Erdoğan on Feb. 9. "We have not received any proposal for alliance, but we can talk with anyone if need be," he said.

Commenting on the issue, Destici said the BBP would like to see the SP join the alliance as well. When asked about whether the BBP supports President Erdoğan's candidacy for re-election, Destici said it would be unreasonable to name another candidate within the same alliance.