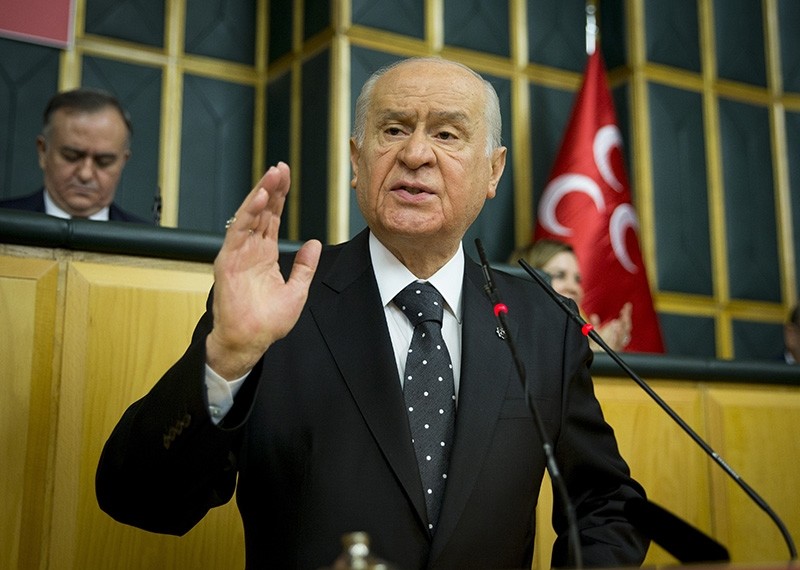 Speaking at his party's parliamentary group meeting Tuesday, Bahçeli said that his party is in favor of holding snap polls, rather than waiting for the scheduled elections on Nov. 3, 2019.

He argued that snap elections would significantly benefit Turkey and the country's future.

Bahçeli led the MHP to support the presidential system change in April 2017 referendum along with the ruling Justice and Development Party's (AK Party), and the two parties formed an electoral alliance named People's Alliance after introducing a law allowing for alliances to be formed in March 2018.

Although President Recep Tayyip Erdoğan did not directly respond to Bahçeli's remarks, he pointed Tuesday to the scheduled date for the elections at the AK Party's parliamentary group meeting. "The changes in the constitution for the presidential system will be fully implemented after the presidential and parliamentary elections in November 2019," Erdoğan said. Earlier this month, Erdoğan said that holding snap elections was out of question.

Ümit Özdağ, the deputy chairman of the Good Party (IYI Party) that split from the MHP after a heated leadership race after 2015 elections that ended in courts, said that they were already expecting early elections for November in line with the AK Party's general and local congresses.

According to the constitution, to implement the changes to elections made in the election law, one year needs to pass after they were first ratified.

However, this condition was removed for one time only at the April 16 referendum for the upcoming elections, therefore allowing the changes in the election law, such as the electoral alliance bill, to be implemented without time precondition.

Leader of the MHP since 1997, Bahçeli is often dubbed as the king-maker in Turkish politics, As deputy prime minister at the time, Bahçeli previously called for snap elections in 2002 as a partner of the tripartite coalition also consisting of the Democratic Left Party (DSP) of late Prime Minister Bülent Ecevit and center-right Motherland Party (ANAP) Mesut Yılmaz. The coalition was falling apart due to divisions in the DSP stemming from Ecevit's poor health and several figures emerging as leading candidates. At the same time, Turkey was trying to recover from its biggest economic crisis to date in 2001 and subsequent austerity measures demanded by the World Bank and the International Monetary Fund (IMF), in addition to the effects of Feb. 28, 1997, post-modern coup, which led to political pressure and discrimination against the conservatives.

The results of the elections changed Turkey's political landscape for the next decades as traditional center-left and center-left parties in the parliament failed to pass the 10 percent national threshold, including the MHP that received 50 percent fewer votes than the previous elections at 8.3 percent. The Turkish electorate opted for fresh options, backing the newly founded AK Party with 34 percent of the votes whereas the CHP, failing to enter the parliament in 1999, doubled its votes to 19 percent and became the only opposition.

As the CHP strongly objected to Abdullah Gül's candidacy for the presidency and refused to the attend parliamentary sessions to block the election process, the AK Party called for early elections, and the MHP returned to the parliament in 2007 with 14 percent of the votes. The deadlock over presidential elections was resolved as the MHP attended the sessions and the two-thirds quorum requirement imposed by the Constitutional Court was met.