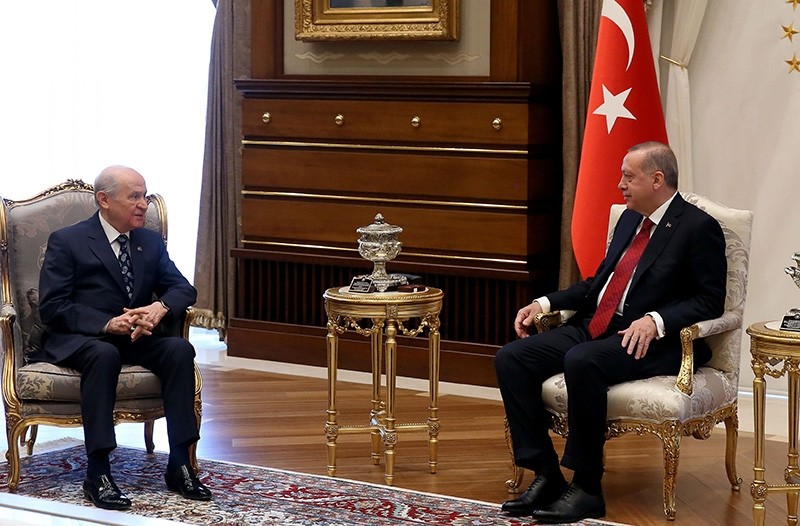 A handout picture taken and released by the Presidential Press Service on April 18, 2018, shows President Recep Tayyip Erdou011fan (R) meeting with MHP Chairman Devlet Bahu00e7eli (L) during their meeting at the Presidential Complex in Ankara (AFP Photo)
by Daily Sabah with Agencies Apr 18, 2018 12:00 am

President Recep Tayyip Erdoğan on Wednesday announced that Turkey will have snap parliamentary and presidential elections on June 24, 2018, after a meeting with opposition Nationalist Movement Party (MHP) chairman Devlet Bahçeli at the presidential complex, a day after the latter called for snap elections to be held in August.

The meeting, which started at 1:30 p.m. local time (1030GMT), came after Bahçeli's stunning statement Tuesday urging the government not to wait for the scheduled date of Nov. 3, 2019, to hold presidential and parliamentary elections.

Addressing reporters in a news conference at the Presidential Complex in Ankara, Erdoğan said that the recent developments in Turkey -- including the cross-border counter-terror operations in Iraq and Syria, and the crisis in neighboring countries -- have made it necessary for the country to overcome uncertainty.

"We are immediately launching the legal process regarding the matter, and without a doubt, Turkey's Supreme Election Board will also start preparations for the elections as soon as possible," Erdoğan said.

The president noted that there is a necessity to immediately switch to the presidential system and the issue has been discussed in detail among officials.

"We have reached a consensus among our colleagues to welcome the snap elections proposal," Erdoğan said.

The comments surprised commentators since the government led by the AK Party has repeatedly insisted there will be no early elections.

The meeting between the two lasted for half an hour, according to a presidential source who asked not to be named due to restrictions on speaking to the media.

Speaking at his party's parliamentary group in the capital Ankara, Bahçeli had said: "It should be known that the MHP wants early elections after the [constitutional] adjustment laws are enacted."

"Electing the president on Aug. 26 [...] is the most rational and reasonable way forward."

On April 16, 2017, Turkey held a referendum during which the majority of voters decided in favor of an 18-article bill to switch from a parliamentary to a presidential system.

Turkey's parliamentary and presidential elections are currently scheduled to take place in November 2019.

Bahçeli led the MHP to support the presidential system change in the April 2017 referendum along with the ruling Justice and Development Party (AK Party), and the two parties formed an electoral alliance named People's Alliance after introducing a law allowing for alliances to be formed in March 2018.