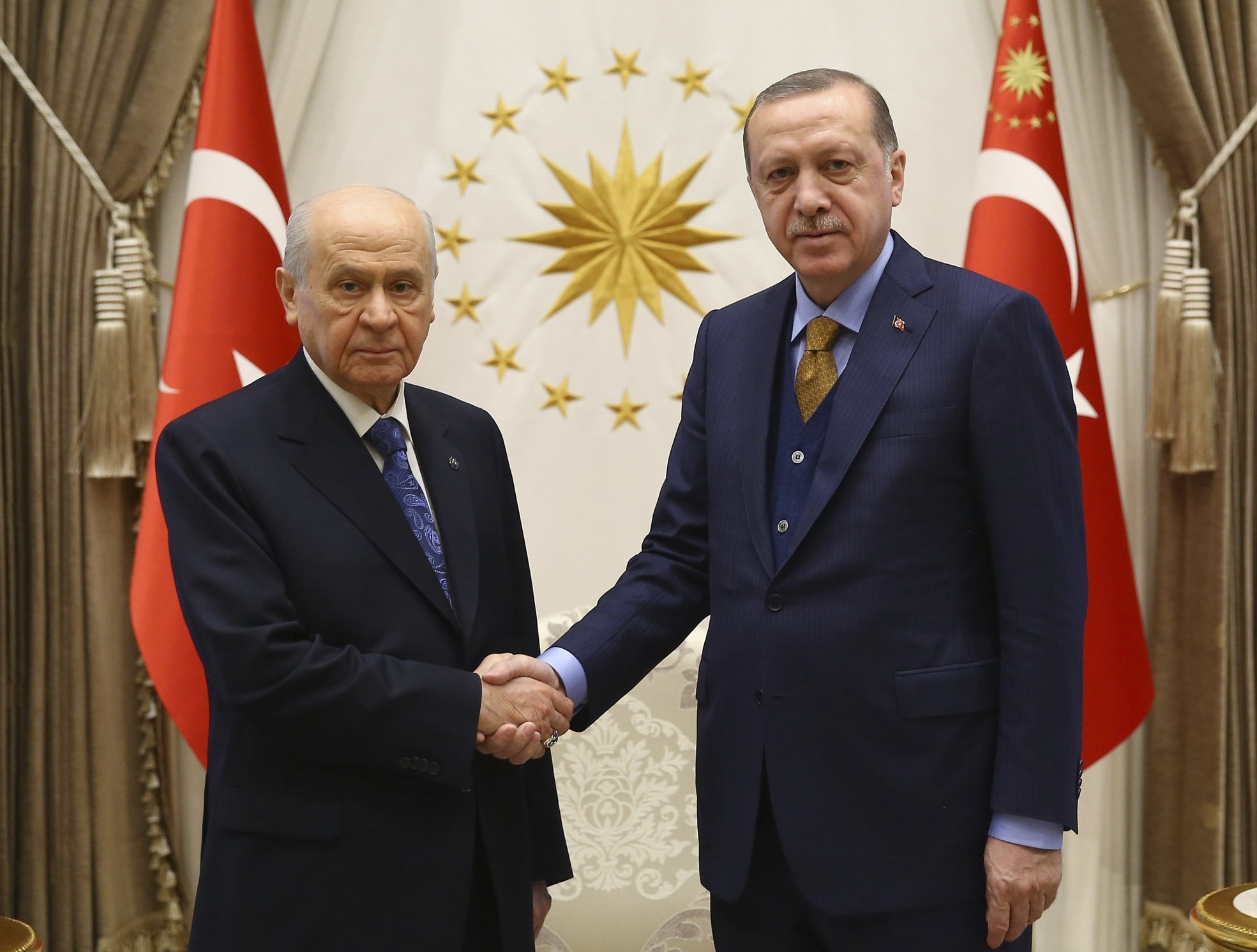 MHP Chairman Bahu00e7eli (L) said yesterday that the MHP would prefer for early elections after the adjustment laws for the new government system are enacted.
by Daily Sabah Apr 18, 2018 12:00 am

The chairman of the ruling Justice and Development Party (AK Party), President Recep Tayyip Erdoğan, is set to discuss the suggestion for snap elections in a meeting today with Nationalist Movement Party (MHP) Chairman Devlet Bahçeli in Ankara. In a surprise move yesterday, Bahçeli called for snap presidential and parliamentary elections to be held on Aug. 26, 2018. Erdoğan said that he will discuss the suggestion with Bahçeli in the meeting expected to take place at 1:30 p.m. local time. Speaking at his party's parliamentary group meeting yesterday, Bahçeli said: "It should be known that the MHP opts for early elections after the adjustment laws are enacted."

Prefacing that there has been a long time between the general elections and local elections, Bahçeli said that during the process, the presidential system would be targeted, risking the whole process. "The presidential governing system is continuously being criticized and defamed with attempts to harm it before it is adopted. At this point, it is not possible or reasonable for Turkey to endure this until the elections on Nov. 3, 2019," Bahçeli said. Addressing the AK Party's weekly parliamentary group meeting, Erdoğan did not openly comment on Bahçeli's calls for early elections, and instead pointed to 2019 for the implementation of the new executive presidential system.

He said the constitutional changes approved in the April 16, 2017 referendum would be fully in force by the November 2019 elections.

"The AK Party remained loyal to the Aug. 7 process with the MHP. Yet, the so-called main opposition is one thing in the morning and another at night," he said.

The first reaction from the CHP to the suggestion of snap elections came from party spokesman Bülent Tezcan, who said: "The CHP is ready."

Tezcan said that the CHP had previously stated that it is ready for elections. He added that "Turkey is at an impasse," and that the will of the people would break the impasse.

It has been a year since Turkey held a constitutional referendum on April 16, 2017, in which a majority of voters decided in favor of switching from a parliamentary to a presidential system. Following the decision, the duty fell on political parties to make the necessary legislative changes in line with the new system. The new system aims at minimizing the sluggishness of state institutions and bureaucratic channels.

"The presidential government system was accepted by the Turkish nation. It is legitimate and deserves respect," Bahçeli said. "If the CHP wants to be respected, it needs to respect the will of the people."

In the previous November 2015 general elections, which were held after the June 2015 election failed to produce a coalition government, the AK Party obtained 49.50 percent of the vote and formed the government with 317 of the 550 seats in Parliament while the CHP garnered 25.32 percent and the MHP got 11.90 percent of the vote.

In the local elections held on March 30, 2014, the AK Party won 18 metropolitan municipalities while the CHP won six and the MHP won three.

For the upcoming presidential elections, the MHP and AK Party formed what they call the People's Alliance, as Bahçeli previously said the MHP will support Erdoğan in the presidential election. Bahçeli said that this decision is in accordance with the "Yenikapı spirit," referring to a rally that took place in Istanbul on Aug. 7, 2016, with an aim of showing solidarity after the a failed coup attempt on July 15.

In order to pave the way for a legal basis to form alliances, the MHP and AK Party drafted a 26-article alliance bill and passed it in Parliament. Following the ratification of the alliance law, other political parties have been holding talks to forge alliances, as well, since it would be more difficult to gain a majority of the vote alone. A total of 50+1 percent of votes are needed for a presidential candidate to be elected in the first or second round of the upcoming presidential election.