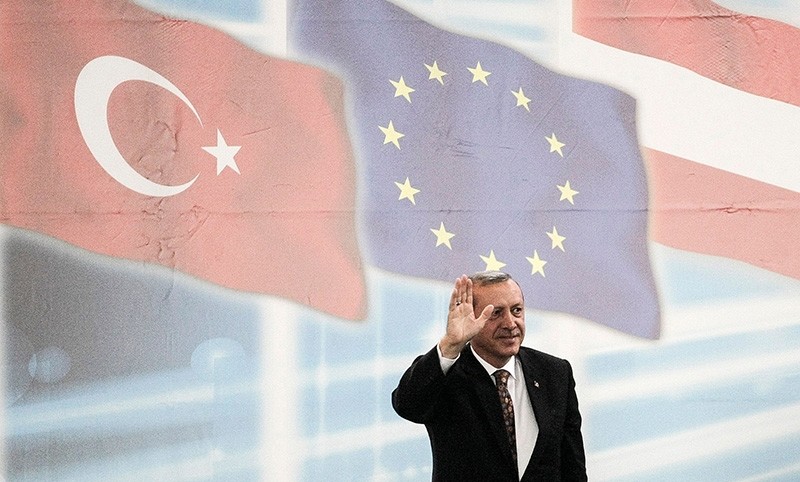 ) In this file photo taken on June 19, 2014, then-PM Recep Tayyip Erdou011fan gestures prior to give a speech during an event to mark the 10th anniversary of the Union of European Turkish Democrats UETD at the Albert Schultz Hall in Vienna (AFP Photo)
by Daily Sabah with Reuters Apr 20, 2018 12:00 am

Austria's right-wing coalition government, which is strongly opposed to Turkey joining the European Union, will bar Turkish politicians from campaigning on its territory ahead of June elections in Turkey, the chancellor has said.

President Tayyip Erdoğan announced snap parliamentary and presidential elections this week, bringing the votes forward by more than a year so that Turkey can switch to a new executive presidency system that was approved in a referendum last year.

Ahead of that referendum, Turkish politicians sought to drum up support in countries with large Turkish communities, like the Netherlands and Germany. Turkey criticized European countries for trying to interfere in the elections by banning politicians favoring the "yes" vote in the referendum, while allowing "no" politicians to freely campaign.

"Erdoğan's Turkish leadership has been trying to exploit Europe's communities of Turkish origin for many years," Chancellor Sebastian Kurz, who is known for his anti-Turkey stance told ORF radio in remarks broadcast on Friday. "Turkish election campaign appearances in Austria are unwanted and we will therefore no longer allow them."

Austria's opposition to such events is, however, not new.

The previous chancellor, a Social Democrat, said last year that he would try to prohibit any campaign appearances by Turkish ministers. A law has since been passed giving the government greater powers to ban foreign political gatherings.

Several hundred thousand people in Austria are Turkish or of Turkish origin.

Kurz's conservatives are in a coalition government with the anti-Islam Freedom Party, making Austria the only western European country to have a far-right party in government. Both parties believe the European Union should break off Turkish accession talks.

When asked if Austria would prevent campaign events by all Turkish political parties, however, Kurz said it would.

In Austria, where officials implemented an aggressive anti-Turkey rhetoric, 73 percent votes went for "yes," with a turnout rate of 48 percent.

The referendum campaign had also given way to a diplomatic spat between Turkey and the Netherlands when the latter prevented denied landing permission to Foreign Minister Mevlüt Çavuşoğlu's plane en route to Rotterdam for a referendum meeting on March 11.

Dutch police then attacked Turks who were at the scene to meet Kaya and to protest the treatment of the minister.