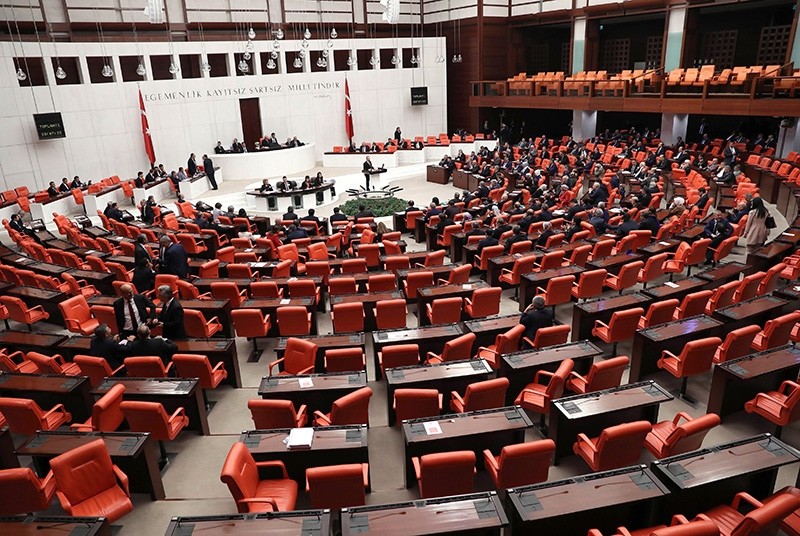 A picture taken on April 20, 2018 in Ankara shows a general view of Grand National Assembly of Turkey (TBMM) as debate motion on proposed early presidential and parliamentary elections begin. (AFP Photo)
by Daily Sabah Apr 22, 2018 12:00 am

As Turkey heads to the polls for early presidential and parliamentary elections on June 24, Turkey Supreme Election Board (YSK) released Saturday the distribution list of deputies to the country's 81 provinces in line with their population, in addition to the schedule for candidates to follow.

Public servants will need to present their letters of resignation by April 26, 5:00 p.m. local time to run in the upcoming elections. Therefore, next week will be determinant for the candidates and their respective parties.

YSK President Sadi Güven said Sunday that in order to announce the full election calendar, the board currently awaits the adjustment laws concerning the switch to the presidential system to be handled by the parliament.

The YSK also released the list of electoral districts and their respective number of deputies based on the 2017 population data presented to the YSK by the Turkish Statistical Institute (Turkstat) as of Dec. 31, 2017.

According to the changes adopted in the April 16, 2017 constitutional reform and presidential system referendum, the number of deputies in the Grand National Assembly of Turkey has been increased from 550 to 600.

Istanbul and Izmir, which have 98 and 28 deputies, were divided into three and two electoral districts respectively. Istanbul will have more deputies than the total of 35 provinces combined.

The northern province of Bayburt became the smallest electoral district as it will send only one deputy to the parliament in June 24 elections. The province currently has two deputies in the parliament.