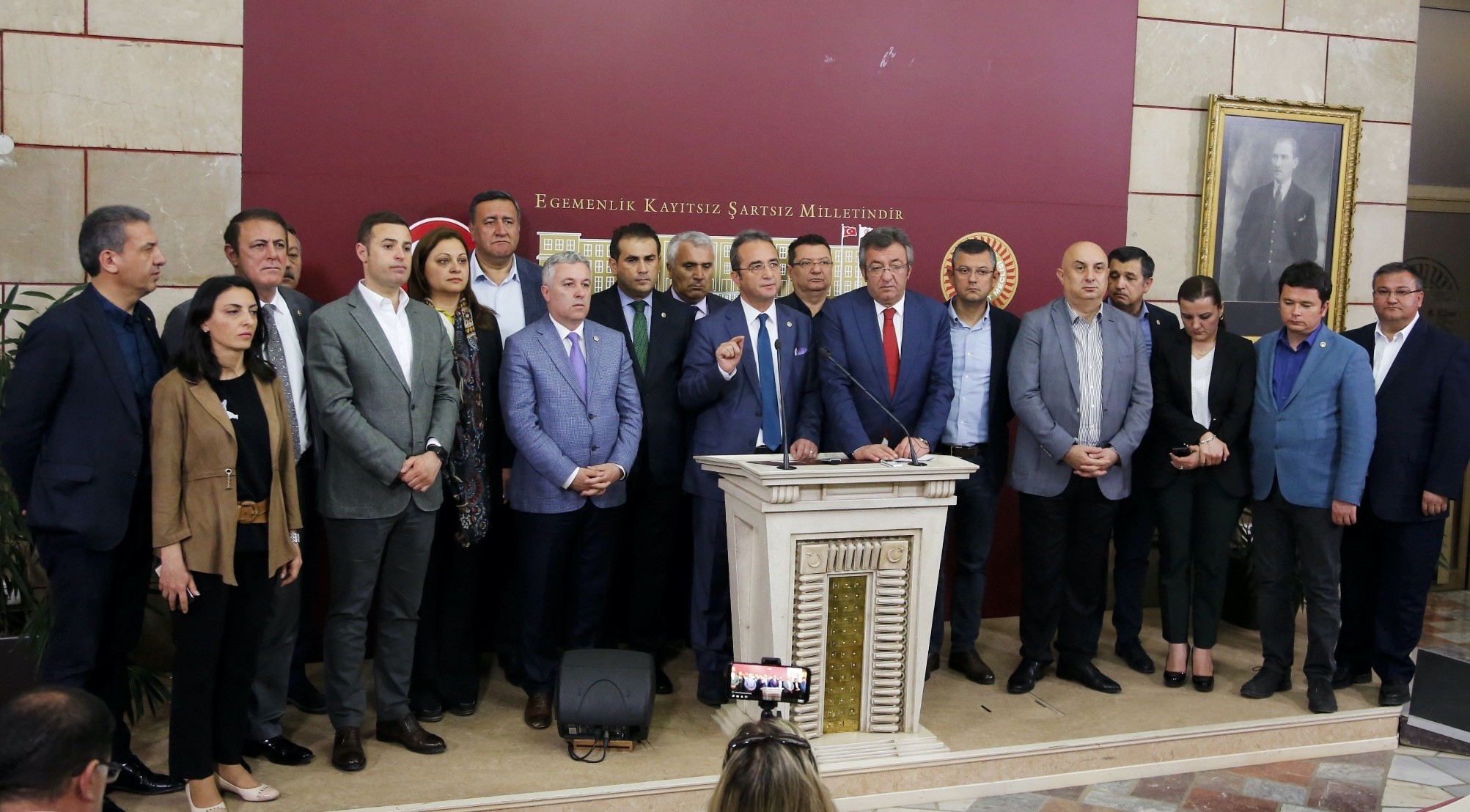 Fifteen CHP deputies who switched their allegiance to the u0130P over the weekend look on as four senior CHP party executives explain why these deputies were seen as disposable.
by Şeyma Nazlı Gürbüz Apr 23, 2018 12:00 am

CHP overlooks its voter base by undermining their center-left ideology with its latest strategic move, transferring 15 of its deputies to the far-right İP

The Republican People's Party (CHP) has undermined the choices of its center-left voters by transferring 15 deputies to the far-right Good Party (İP) on Sunday, many of whom are deputies from regions where the CHP receives strong support, in an effort to ensure the participation of the İP in the upcoming June 24 snap parliamentary and presidential elections. The CHP move is seen as a strategic maneuver to solidify opposition against the Justice and Development Party (AK Party) and the Nationalist Movement Party (MHP) alliance, known as the People's Alliance, and their candidate the incumbent President Recep Tayyip Erdoğan.

However, although it is a strategic move at the political parties' level, what the CHP did on Sunday has also received some criticism due to the distinct electoral bases of the CHP and the İP and that the deputies transferred to the İP are mostly elected from cities with mainly leftist tendencies rather than far-right. The 15 deputies that the CHP transferred to the İP are from mainly leftist 14 cities, including Afyon, Amasya, Ankara, Balıkesir, Bursa, Çorum, Edirne, Kayseri and Niğde provinces.

In 12 of these provinces, CHP votes were higher than MHP in the latest general elections held in November 2015, constituting a possible voter base for the İP in the upcoming elections. In its formation, the İP took several deputies from the MHP, as they share a common ideological stance and target a similar electoral base. With the transferring of the deputies, the CHP has given the far-right İP a number of deputies in areas which traditionally have leftist tendencies.

As a matter of fact, in six of these cities, the difference between the percentage of CHP votes and MHP votes is more than 20 percent, even reaching 30 percent in some places. In Zonguldak, for instance, the percentage of votes that the CHP received in the 2015 general elections was 36.4 percent, while the MHP's percentage was 9.5 percent. Similarly in Edirne, the CHP took 57 percent of the votes, while MHP only received 10.7 percent. The same situation is also valid for cities like İzmir and Aydın. This shows that if the İP ran today, there would be a high possibility that these deputies would not be elected since the people who voted initially for them are actually supporting a different ideology than of the İP. Therefore, by transferring these deputies to the İP, the CHP actually overlooked its supporters' decision. In terms of its ideology, the İP can be described a far-right political party given its nationalist and conservative stance.

The closest ideology among the Turkish political parties to the İP belongs to the MHP, the party which İP leader Meral Akşener and many other party members were originally supporters of. The İP was founded in October 2017 by mostly former MHP dissidents and Akşener was a prominent figure among the MHP dissidents who heavily criticized the policies of the MHP's chairman of 20 years, Devlet Bahçeli, after the general elections on June 7 and Nov. 1, 2015. The intra-party debate ended when the dissidents were dismissed from the party after a heated process ended in court. The CHP, on the other hand, is the oldest political party in the country, founded by Mustafa Kemal Atatürk, and has social-democratic tendencies, which place it in the center-left of the political ideological spectrum in Turkey. That is to say, in terms of their ideology, what they stand for and aim to establish, the CHP and the İP are complete opposites, making it a highly questionable move for CHP supporters.

A party needs to have at least 20 deputies to form a group in the Grand National Assembly of Turkey (TGNA). The İP is currently represented by five deputies in Parliament, with four former MHP deputies and one former CHP deputy. With the inclusion of the 15 CHP deputies to the party, now the İP is able to form its own group within Parliament.

At a press conference in Parliament, CHP Deputy Group Chairman Engin Altay said the decision is merely a formality to overcome a possible veto by the Supreme Election Board (YSK), although a recent document provided by the Prosecutor's Office of the Supreme Court of Appeals — the depository of political party documents — to the YSK reportedly lists the İP among the 10 parties eligible to be placed on the ballot on June 24.

"Our friends will not go down in history as deputies who left their party. They will go down as heroes who saved democracy by upholding their responsibilities to their party," the CHP's deputy chairman and spokesperson, Bülent Tezcan, said.However, the move also sparked debate inside the CHP with the intra-party opposition criticizing the move. Istanbul Deputy İlhan Cihaner, a former renowned public prosecutor and currently one of the leading figures of the left-wing intra party opposition, tweeted Sunday asking 20 deputies allocated for other minor left wing parties, namely the Freedom and Solidarity Party (ÖDP), the Communist Party of Turkey (TKP) and the Democratic Left Party (DSP) to allow them to participate in the elections.Cihaner also cited the CHP's bylaws in another tweet, which cites the CHP as a democratic left political party embracing the ideals of the Enlightenment, labor struggles and the principles of freedom, equality and solidarity of the social democratic movement, putting emphasis on the ideological differences of the two parties.