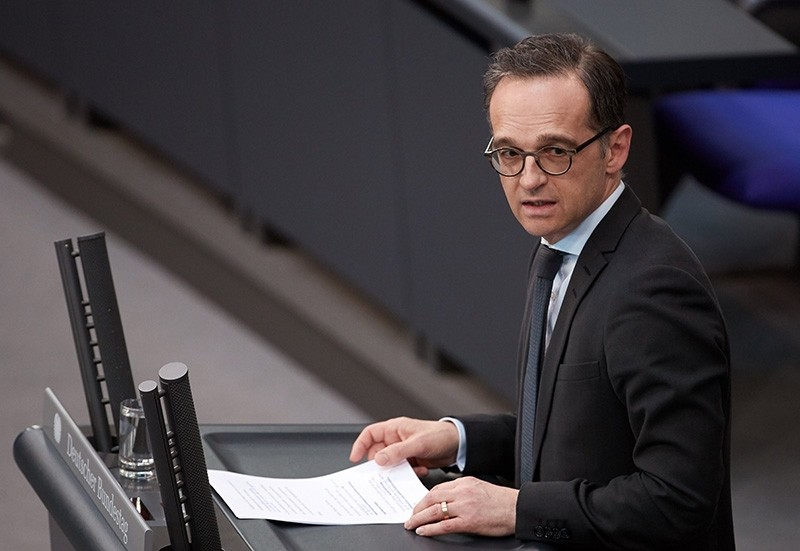 German Foreign Minister Heiko Maas announced that his country will not allow Turkish politicians to carry out election campaign rallies, ahead of upcoming snap parliamentary and presidential elections that will be held on June 24, 2018, reports said Monday.

The Social Democratic Party (SPD) politician's statement comes after President Recep Tayyip Erdoğan announced that he will address Turkish people living in Europe ahead of the elections, and just a few days after Austria and the Netherlands announced that they will prevent political rallies of Turkish politicians in their countries.

"Our attitude regarding the matter is clear. In the three-month period ahead of elections in a foreign country, politicians will not be authorized to carry out election campaigns in Germany," Maas told reporters at a meeting as part of the G7 Foreign Ministers Summit being held in Toronto, Canada.

He noted that the German government brought in a series of legal arrangements prohibiting political rallies for foreign politicians after the April 16, 2017 constitutional reform referendum.

Earlier in March 2017, then Justice Minister Bekir Bozdağ and Economy Minister Nihat Zeybekci were prevented from holding meetings in Germany, prior to the April 16 constitutional referendum.

"That is the case; and that is the case for everyone, independent of where they come from," Maas said, over concerns about how the decision will effect Turkey-Germany relations.

Various German towns and local administrations imposed similar bans on "Yes" campaign meetings, including those of the Union of European Turkish Democrats (UETD), which is registered in Germany.

Foreign Minister Mevlüt Çavuşoğlu is expected to discuss the issue with Maas at an upcoming meeting in New York, reports said.

The General Secretariat of Angela Merkel's Christian Democratic Union (CDU), Annegret Kramp-Karrenbauer, also said that the election campaigns of Turkish political parties should not spread to Germany. Speaking to German Press Agency (DPA), Kramp-Karrenbauer stated that the struggle over the upcoming elections in Turkey should take place in Turkey, not in Germany. "We do not want Turkey's domestic politics in our cities, making it harder to live together," she added.

On a similar note, Austria and the Netherlands have also said that they would not allow Turkish politicians to carry out election campaigns in their countries. "Turkish election campaign appearances in Austria are unwanted, and we will therefore no longer allow them," Austrian Chancellor Sebastian Kurz said.

Last year, Turkish Minister of Family and Social Policies Fatma Betül Sayan Kaya was not allowed to enter the Turkish Consulate in Rotterdam, which led to a diplomatic crisis between the two countries.

However, President and Chairman of the Justice and Development Party (AK Party) Recep Tayyip Erdoğan said over the weekend that he will hold a grand rally in one of the European countries.

"I will be present at an international organization event at an 11,000 capacity sports hall and address my fellow Turkish citizens there. It is highly likely that we will gather [Turks in Europe] there and deliver our speech," Erdoğan said in a televised interview Saturday night, adding that the fight for democracy cannot be blocked so easily.

The president also criticized Austrian Chancellor Kurz's statements, saying that such an attitude will backfire and harm Austria and Kurz.

During the constitutional reform referendum campaign, Ankara sharply condemned such obstructions by European countries, comparing them to the practices of fascist regimes during World War II and also accused these governments of taking sides in Turkey's referendum by favoring the "no" campaign. The "no" campaign meetings did not face any obstructions, as various German politicians and media outlets openly declared their support for the "no" camp.

Throughout the campaign, Erdoğan and the AK Party were criticized by European media outlets at an unprecedented rate, using derogatory rhetoric. This led to a bitter war of words between Turkish and German officials.