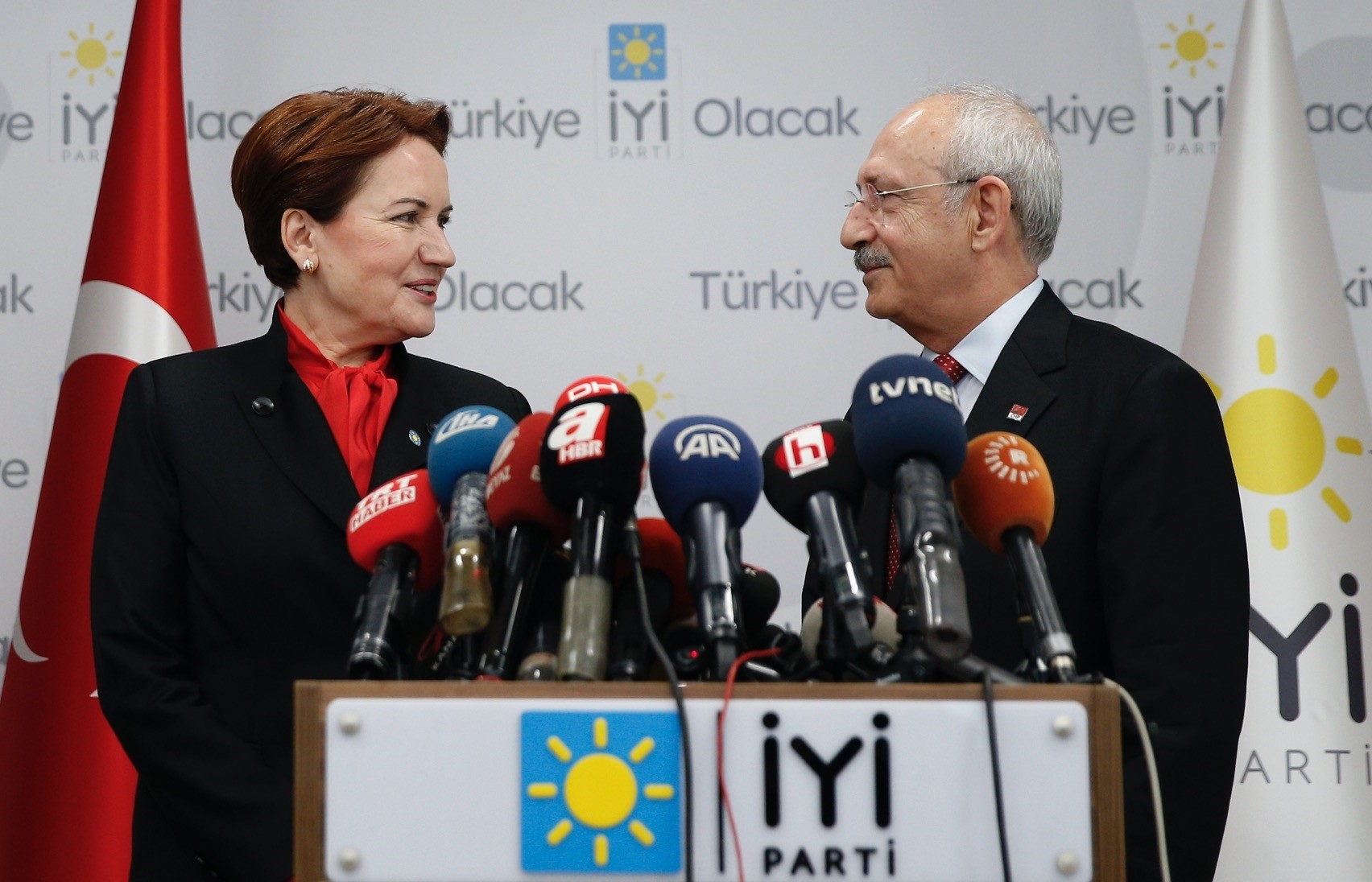 With the move of transferring deputies, the CHP allowed the u0130P the right to create a parliamentary group, which is the safest way for Aku015fener to become a presidential candidate.
by Daily Sabah Apr 23, 2018 12:00 am

As the CHP allowed 15 of its deputies to join the İP, the move is being considered as part of Kılıçdaroğlu's plan to push a different candidate to face President Erdoğan, or bring İP's Akşener into CHP's fold for an alliance

Fifteen deputies from the main opposition Republican People's Party (CHP) yesterday resigned and switched their allegiance to the far-right Good Party (İP), in a surprise move that is believed to mean that the CHP Chairman, Kemal Kılıçdaroğlu, has decided no one in his party will be a presidential candidate, including himself, and handed over this right to İP's leader, Meral Akşener. The CHP, founded in 1919, with this move, has allowed the İP, founded on Oct. 25, 2017, the right to create a parliamentary group, which is the safest way for İP Chairwoman Akşener to become a presidential candidate. The other, less guaranteed, option, was for her to collect 100,000 signatures.

The ruling Justice and Development Party (AK Party) and opposition Nationalist Movement Party (MHP) have chosen the incumbent, Recep Tayyip Erdoğan, as their joint candidate for the presidential elections on June 24. The secularist CHP, in response, was expected to seek a coalition with other parties to challenge Erdoğan. The pro-PKK Peoples' Democratic Party (HDP) was the only other party with a parliamentary group, until yesterday. There are two possible reasons discussed for yesterday's planned move to handover 15 deputies. The İP already had 5 deputies, who had jumped ship from the MHP. With yesterday's additions, it has 20 deputies, the minimum for a parliamentary group, a prerequisite to pick a presidential candidate.

One option is that Kılıçdaroğlu, which faces significant pressure to challenge Erdoğan as a presidential candidate, has decided not to do so. He also is against any other CHP member running. In the 2014 presidential elections, he had chosen Ekmellettin İhsanoğlu, a theologian and now an MHP deputy, as a joint presidential candidate with MHP. This time around, he may be considering İP's chairwoman as a joint candidate. One other possible option is for Kılıçdaroğlu, who is expected to announce his party's strategy at tomorrow's parliamentary group meeting, is that the CHP will pick its own candidate and offer Akşener to post of deputy president.

While the CHP did not need to hand over 15 deputies to secure this possibility, the move was done to show the party's commitment to an election alliance. Pundits believe the first option is more likely, and that the move was done to prevent other CHP members from considering a run. The move might cause controversy within the CHP's social-democratic electorate, who strongly criticized İhsanoğlu's candidacy in the last presidential elections.

The CHP deputy İlhan Cihaner criticized the move of switching deputies to the İP and a possible alliance with the far-right party. "We also want 20 deputies for ÖDP, TKP and DSP!," he tweeted, mentioning respectively the Freedom and Solidarity Party, the Communist Party of Turkey and Democratic Left Party, minor left-wing parties of Turkey.

He also sent a tweet of an article of the CHP bylaw, which refers the party's leftist identity. "The CHP is a democratic leftist party that indigenized the labor struggle, freedom, equality and the solidarity principles of social democracy," he tweeted.

The MHP leader Devlet Bahçeli yesterday described the alliance as act of desperation and a political game.

Akşener previously said that she would never be involved in bizarre political games or alliances just to be a presidential candidate, declaring her intention to collect 100,000 signatures instead.

President Erdoğan calls on CHP leader to challenge him

As the main opposition ponders on an ideal joint candidate, Erdoğan challenged Kılıçdaroğlu to personally contest him in the elections. "I would like to see leader of main opposition leader in this race. There is no need to search for another person because his words reflect his overconfidence. Be a candidate, and we will see how much our people trust you," the president said on Saturday in a televised interview on NTV. The CHP Deputy Group Chairman Engin Altay said last week that Kılıçdaroğlu is the strongest nominee for the candidacy so far. "The curiosity about who will be the CHP's leader is a sign that the CHP will win the elections," Altay said, adding that party's caucus will determine who will be the ultimate candidate. Responding to a question of what kind of candidate he wants to challenge with, Erdoğan also said that he is ready to face with whoever confronts him in political arena.

Hakan mentioned Akşener's candidacy as second possible strategy. According to his opinion, she is an assertive figure and can easily collect votes from Kemalist voters along with her natural electors, and also can be a strong joint rival against Erdoğan in the second round. The last possible candidate, Hakan said, is Muharrem İnce, who can cause enthusiasm among the public as "he is a populist, successful in polemics and may stand against Erdoğan by this way."

Speaking to Doğan News Agency, CHP vice chairman Bülent Tezcan said that CHP has no plans to meet with former President Abdullah Gül on the candidacy, adding that the party will nominate a candidate within the party.

Aside from those candidates, current Eskişehir Mayor Yılmaz Büyükerşen was among those mentioned as the party's possible presidential candidates. Büyükerşen has been a popular figure among the public, known for his popularity among traditional CHP voters. However, his old age, currently 81, is considered a disadvantage.

The Parliament on Friday ratified the bill on holding early parliamentary and presidential elections on June 24, with 386 votes in favor. Following the approval in the Parliament, the Supreme Election Board (YSK) is expected to prepare the electoral schedule. The YSK yesterday approved the İP's participation in the presidential and parliamentary elections.

Also, a constitutional committee was scheduled to discuss the adjustment law proposal today at 18:00. After passing the committee, it is expected to be discussed in Parliament in this week.