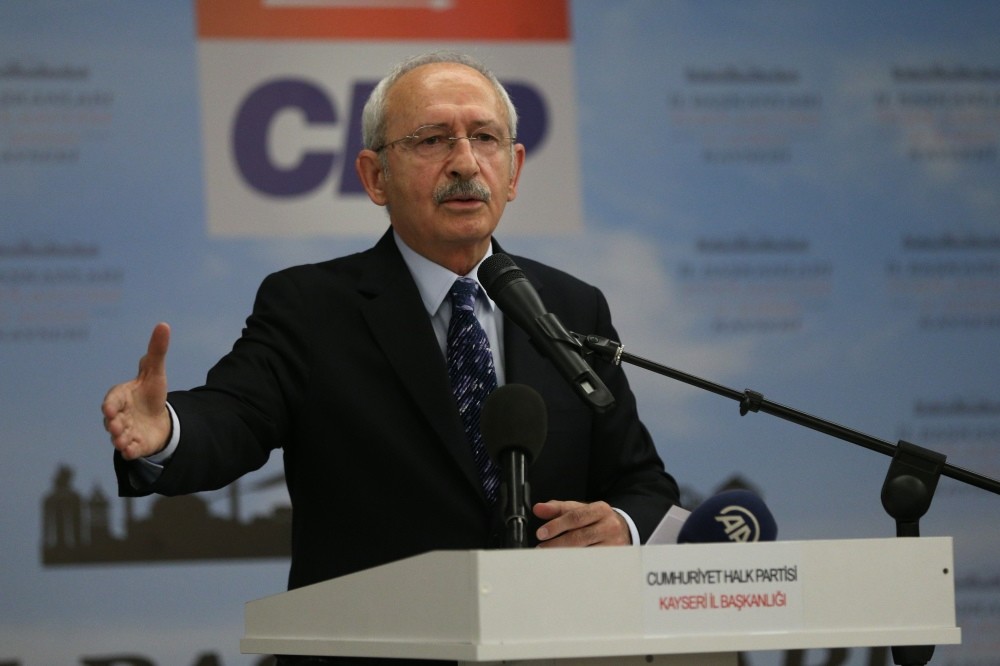 Caught off guard for the June 24 snap parliamentary and presidential elections, the CHP has been struggling to find a candidate to run for president with less than five days left for the deadline for parties to list their candidates

The main opposition secularist Republican People's Party (CHP) is caught between the proverbial "devil and the deep blue sea" over its presidential candidate for the June 24 elections. After plans for a joint candidate with Islamist conservative Felicity Party (SP) and the far-right Good Party (İP) fell through, the CHP has now turned to its party lines to come up with a possible candidate. The task, however, has not been so easy, as the party struggles to find a candidate who could appeal to the majority of voters in order to get the 50+1 percent support in the presidential elections. Initially, the CHP considered former President Abdullah Gül as an option, but with Gül deciding to not run for the office and amid increased criticism from members, CHP turned to intraparty figures for possible options.

From among party members, CHP Yalova Deputy Muharrem İnce, Eskişehir Mayor Yılmaz Büyükerşen and Istanbul Deputy İlhan Kesici have been mentioned as strong nominees for candidacy. A candidate from CHP ranks has also reportedly been preferred by party members.

İnce, a populist, comes from the CHP lines, while Büyükerşen is known for being a traditional center-left figure. Kesici, on the other hand, is a liberal figure with a center-right past.

However, CHP Chairman Kemal Kılıçdaroğlu Sunday said that their candidate may be a figure from outside the party, a move which will further deepen the discord within the CHP.

"We do not necessarily need to decide on a candidate who is a CHP member," Kılıçdaroğlu told reporters on his way to the southern resort town of Marmaris.

The CHP leader has already made clear that he will not run for president, a decision criticized by some party members as well.

Talking about the CHP's preference for a candidate, Kılıçdaroğlu recently said that they would have to be very astute in the economy, education and foreign policy.

Political circles have also pointed at Abdullatif Şener, a figure from outside the party, as a possible candidate for the main opposition party.

Şener, 64, is a former AK Party deputy, however, he began his political life in the conservative Welfare Party (RP) in 1991 and later in the Virtue Party (FP), which was the continuation of the RP after it was shut down.

He joined the AK Party in 2001, as one of the founders, and stayed with the party until 2008. Due to disagreements, Şener parted ways with the AK Party and established the conservative Turkey Party (TP) in 2009. However, he has not been successful in the elections since, unable to get into Parliament.

With Kılıçdaroğlu's most recent comments, whether the CHP will look to nominate a center-right name as its candidate still remains to be seen.

Traditionally, the CHP's votes fluctuate between 20 percent and 25 percent, coming mostly from the country's leftist, secularist population. As such, the CHP has been considering a center-right figure to increase its chances in the election race against the main rival President Recep Tayyip Erdoğan.

The parties have been requested to announce their presidential candidates by Saturday. So far İP Chairwoman Meral Akşener and current President Erdoğan have confirmed their candidacy.

The SP is also yet to announce its candidate. If the candidates fail to pass the 50+1 threshold in the first run on June 24, then a second round of votes, with the top two candidates, will be held on July 8.

Both the CHP and the İP have also declared that in case if there is no clear winner in the first run, they will support each other's candidate in the second round of voting.

Meanwhile, CHP Spokesperson Bülent Tezcan said yesterday that the party will announce their candidate mid-week and that efforts to form an alliance for the parliamentary elections were also ongoing.

"All the necessary announcements will be made this week," Tezcan told reporters in Ankara.