Not so united opposition alliance stands against People's Alliance 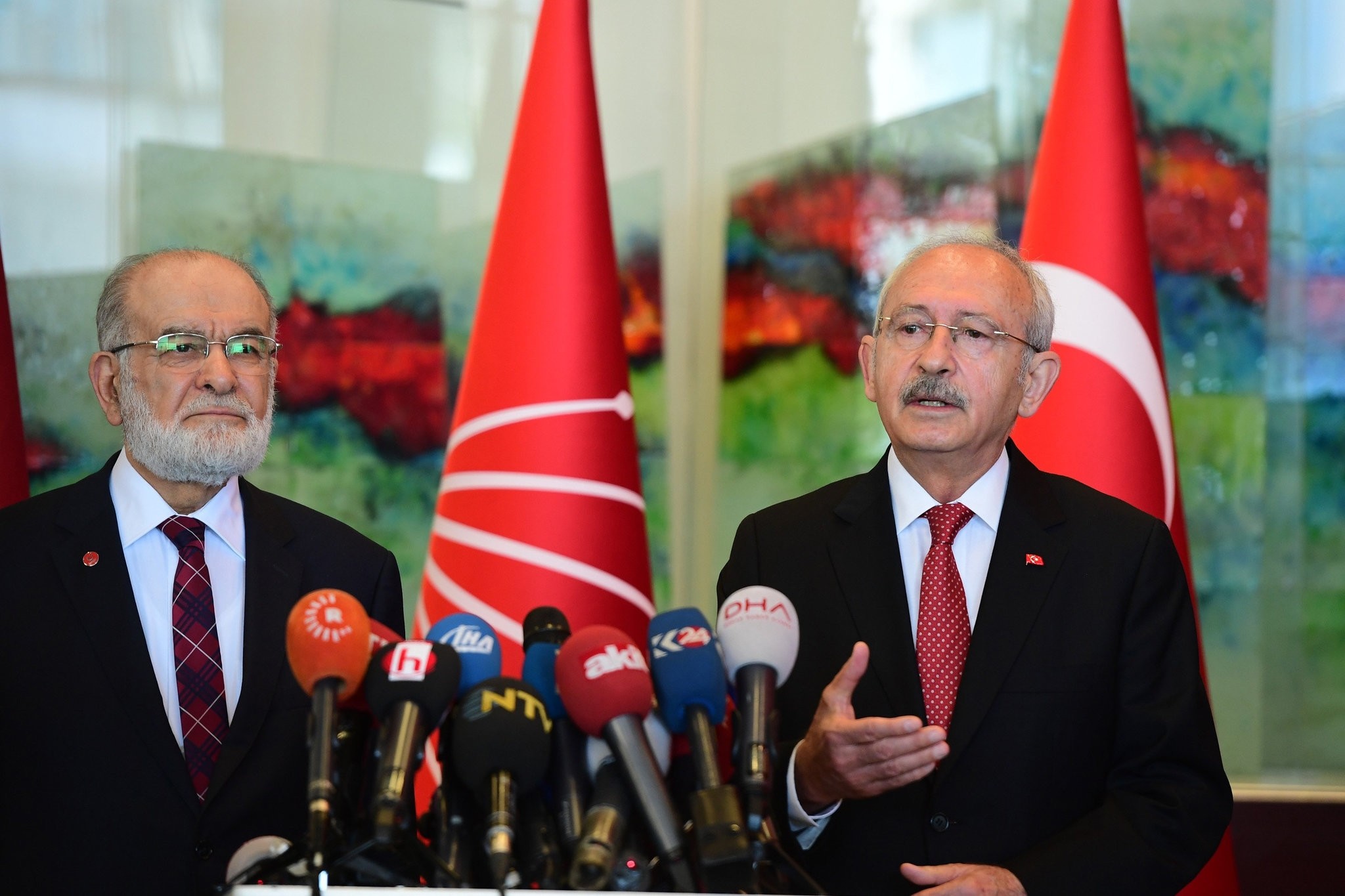 The opposition has formed an alliance against the AK Party and MHP's People's Alliance for the parliamentary elections, yet, the distant views among the opposition may lead to disunity among their voters

Turkey's ideologically distant opposition parties have decided to form an alliance for the upcoming June 24 parliamentary elections to stand against the People's Alliance, formed by the ruling Justice and Development Party (AK Party) and the Nationalist Movement Party (MHP).

The secularist main opposition Republican People's Party (CHP), the far-right Good Party (İP), the Islamist conservative Felicity Party (SP) and the Democrat Party (DP) agreed early Wednesday to form the alliance, which is an attempt to ensure majority in Parliament, against the AK Party and the MHP.

The opposition's alliance, which has yet to be named, is confined to the parliamentary elections. Previously, opposition parties also attempted to form an alliance for presidential elections as well; however, they failed to find a candidate that would appeal to all of the parties' voters since the electoral bases for each party have distinct and distant voters.

The opposition, led by SP leader Temel Karamollaoğlu, held negotiations with former President Abdullah Gül; however, the efforts exerted to find a joint candidate did not yield any successful results as Gül said he decided not to run for president.

Both the CHP and the İP also previously declared that in case there is no clear winner in the first round, they would support each other's presidential candidates in the second round of voting, which will be scheduled for July 8.

One of the questions raised about the sustainability of the alliance is how such distant and distinct electoral bases will respond to their parties' choice in forming an alliance. For example, secularist CHP voters are known for being traditionally leftist or center-left, while SP voters are known for being conservative. Political circles have suggested that the SP voter base, in particular, has not welcomed the alliance with the CHP.

In addition, the aim of the opposition alliance is to establish a strong obstacle for the People's Alliance to achieve majority in Parliament, especially if President Recep Tayyip Erdoğan is re-elected. In the case that Erdoğan wins the presidency but the opposition alliance wins majority, it has also been said by some pundits that it may cause conflict between the executive branch and legislators in Parliament, which would then lead to a deadlock.

On the side of the People's Alliance, the AK Party, the leading partner of the alliance, has a record stretching over the past decade and a half of running the government and success in every election held during that time frame.

The center-right AK Party and the MHP are also not very distant from each other in party views, which are also known to be more appealing to Turkey's electoral center-right reality.

When Turkey's longest run single-party governments are examined, it can be seen that they have mostly been center-right parties, including the Democrat Party (DP) in the 1960s, the Homeland Party (ANAP) in the late 1980s and early 1990s and also the AK Party since 2002.

Erdoğan told journalists in an interview Wednesday that the people will make the right decision and "not fall for the games" of the opposition.

"I do not believe that they will achieve the result they expect to achieve in Parliament," Erdoğan said, referring to the opposition's alliance.

He added that the current surveys indicated a landslide victory for the People's Alliance.

On Friday, Erdoğan said the People's Alliance's aim is to hold Turkey's future as a priority and to ensure a stable parliamentary structure. He added that, in Istanbul in the next five years, all institutional mechanisms will be settling into the new presidential system.

"The People's Alliance is not just an election alliance. It is also an alliance against sources of enmity, both internal and external," Erdoğan said.

The Great Union Party (BBP), a nationalist party, is also in the People's Alliance; however, it is going to list deputies on the lines of the AK Party. The BBP will also support Erdoğan as their presidential candidate.

Erdoğan will also announce his party's manifesto in Istanbul on Sunday, during the Istanbul AK Party provincial branch's congress.

In a protocol announced on Friday by the AK Party and MHP officials, it was also said that the alliance will have the spirit of the July 15, referring to the coup attempt by the Gülenist Terror Group (FETÖ) and the "Yenikapı spirit," referring to the rally that took place in Istanbul on Aug. 7, 2017, with all of Turkey's main political leaders present.

Joint support to ensure re-election of Erdoğan is the main objective of the alliance, it was announced by AK Party Istanbul Deputy Mustafa Şentop and MHP Deputy Chairman Mustafa Kalaycı ahead of submitting the protocol to the Supreme Election Council (YSK) in Ankara. It was also underlined that the alliance is a not just one for the elections, but rather it is a historical unity and that it will work to bring Turkey to a high level development in line with the vision of Mustafa Kemal Atatürk, the founder of modern Turkey, and the national goals set for 2023 and 2071. The year 2023 marks the 100th year since the Republic of Turkey was founded, while 2071 will be the 1000th year since Turks came to Anatolia.