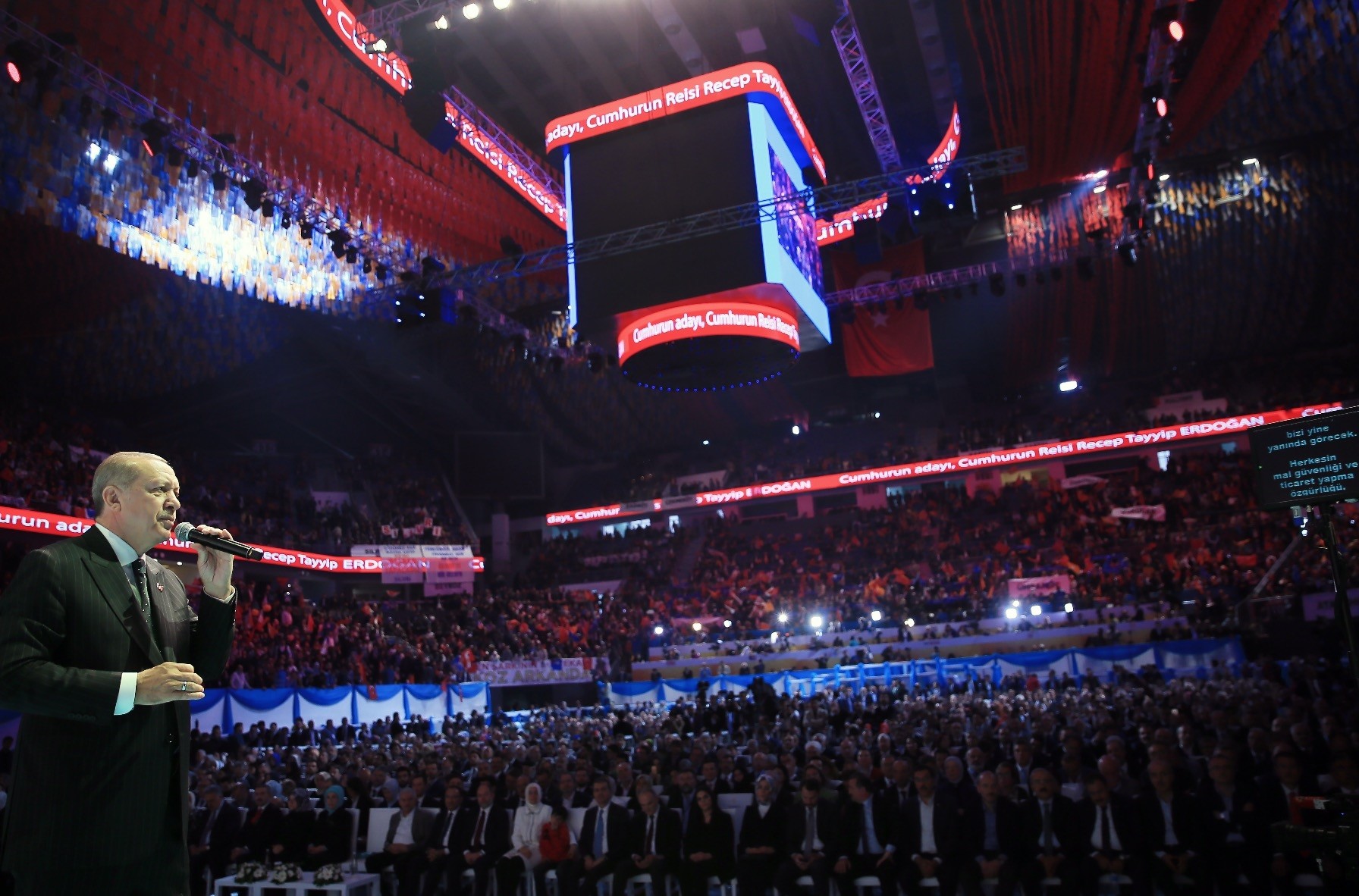 Erdou011fan said AK Party will continue to struggle to make Turkey an important global power and a leading force.
by daily sabah May 07, 2018 12:00 am

President Recep Tayyip Erdoğan has revealed his party's manifesto for a new era being ushered in with a new executive system. He delivered vital messages for the economy, foreign policy, human rights and the regional status of Turkey

The ruling Justice and Development (AK) Party unveiled its manifesto on Sunday in a provincial congress in Istanbul attended by President Recep Tayyip Erdoğan where he vowed to expand freedoms, democracy and welfare in Turkey. Underlining that the June 24 election will be a milestone for Turkey's future, Erdoğan said his party would continue to struggle to make Turkey an important global power and a leading force in the region. "We have been decisive in developing standards in our democracy and human rights.

Also, we developed close cooperation with the Middle East, Balkans, Caucasus and Turkic nations and launched membership negotiations with the EU. Our national security, peace and goals are vital for us. We don't want these just for ourselves, but also for our allies and brothers," he said. Erdoğan added that Turkey defends the rights of oppressed people regardless of their identity in every platform and supports them. The president said that Turkey's difficult region is on the verge of big transformations and a "new world is ahead as the world is not unipolar anymore" and new powers are rising from different parts of the world.

"Turkey remained stable in this hard region despite external interventions, thanks to its strengthened institutions. New alliances have been forged, and Turkey's geostrategic location enables it to forge alliances with different actors," he said.

Institutional transformation will be carried out in next term

Erdoğan said that the AK Party completed a transformation in mindset since it came to power in 2002, adding that now it aims to carry out institutional transformation. "From democracy to economy, we took steps accordingly to meet the needs of our people. We blended domestic values with necessities of modern-democratic politics. Despite facing great resistance in the past 16 years, we made great achievements," he said.

Erdoğan also underlined that Turkey will continue to pursue EU membership, which became a vital goal for Ankara in 2004. Later on however, bilateral distrust and EU's reluctance to open a new chapter caused a hiatus in accession talks.

"We have never given up on our goal of full membership to the EU although lately we have not seen the same determination and desire from our counterparts," he said.

Erdoğan outlined the general principles of Turkey's foreign policy as independence, national interest, national security and a conscientious stance, adding that this will remain unchanged.

"We will not patronize other countries, just as we do not accept being patronized," the president said, stressing that his party is determined to continue diplomacy at an equal level with its counterparts.

War against terrorism will continue

The President also signaled that war against the Gülenist Terror Group (FETÖ) would continue in the next years. "They tried to overthrow the government in the Dec. 17-25 judicial coup attempts. Our people foiled their plans. The PKK and Daesh also attacked Turkey at the same time, he said.

On July 15, a small military junta linked to FETÖ attempted to stage a coup to topple the democratically elected president and government in Turkey and impose martial law. The attempt was prevented by military troops loyal to the government, along with police units and millions of Turkish citizens in favor of democracy, as 250 people, mostly civilians, were killed by pro-coup soldiers, and over 2,000 people were injured. The attempt was masterminded by Fetullah Gülen, who has lived in self-imposed exile on a 400-acre property in the foothills of the Pocono Mountains in Pennsylvania since 1999. Also, between 2015 and 2017, more than 300 people lost their lives in Daesh-claimed attacks in Turkey, where the terror organization has targeted civilians and security forces in suicide bombings and rocket and gun attacks.

People's Alliance is a reflection of unity

President Erdoğan said that a long way lay ahead of Turkey and pointed out that there might be some obstacles along the way to the new system. "Regardless of those who want to derail us from our way, our solidarity will always continue. The People's Alliance is a reflection of our unity in politics," Erdoğan said.

Touching on the threats against democracy throughout Turkey's history, Erdoğan said Turkey has overcome those threats by upholding its democratic values. He underlined that despite various coups, Turkey never gave up its struggle for democracy.

"With the Gezi protests, they targeted our democracy and stability. They attempted to take control of our politics through their supporters that infiltrated into our institutions on Dec. 17-25," Erdoğan said adding that their "heinous plans" were foiled. He also underscored that Turkey will continue to fight against threats against the country's national security. "We have eliminated the terror corridor. The peace of our neighbors is important for us," he said, adding that Turkey has been actively fighting terrorists in places like Judi and Gabar.

Violence against women is crime against humanity

President Erdoğan highlighted the pivotal role that the youth and women would play in building the nation's future.

Commenting on violence against women, the president assured that the efforts will continue to end crimes against women. "Violence, abuse and harassment against women are crimes against humanity," he stressed. As Turkey has a large young population, Erdoğan underlined that "The youth will rear up Turkey with virtue, will and courage. We will just work along with you. Justice will rise with you."

Announced by President Erdoğan on Sunday at the AK Party's Istanbul provincial congress, the manifesto of the June elections featured a series of economic pledges that aim to bolster Turkey's welfare in accordance with its 2023, 2053 and 2071 programs.

The list of items in the economic agenda especially highlighted that Turkey will remain committed to keeping its economy fully integrated with the global economy in an environment of rising protectionist voices.

"While protectionism is rising across the world, Turkey will remain integrated to the global economy," President Erdoğan said.

In order to sustain the continuous economic growth, the president highlighted that the surge in exports, which exceeded $157 billion in 2017, will continue with incremental increases.

In terms of energy policies, which constitute an important leg of AK Party governments' economic agenda, the projects to decrease the dependency on external resources will continue, President Erdoğan pledged.

Another vital part of the economic projects include the indigenous production of land, air and maritime defense systems.

"As Turkey, our goal is to have 100 percent indigenously-made land, air and sea defense systems," he said.

The share of Turkey's domestically produced defense systems currently stands at around 65 percent.

Explaining the economic agenda of the election manifesto, President Erdoğan once again reiterated his vow to increase national income and lower interest rates, inflation and the current account deficit in the new executive presidential system.

Turkey will complete its currently under construction or planned mega-scale projects, including the Çanakkale 1915 Bridge and Kanal Istanbul.

Erdoğan also pledged that the new system will expedite the bureaucracy and ensure a more effective state bodies and decision-making mechanisms to facilitate investment and other business-related processes, which is a promise of the new presidential government system.

AK Party exerts effort to establish justice, including among all minorities

Erdoğan also said that AK Party appeased the need of justice for all fractions of society, including ethnic and religious minorities who were previously exposed to discrimination.

"The properties of minority foundations were returned to their real owners. We struggle day and night to establish justice in Turkey," he said.

The president also drew attention to threat of rising exclusionist policies worldwide, saying that cultural discrimination and Islamophobia have been undermining Western values. Since the AK Party came to power in 2002, Turkey has sought to restore the rights of religious minorities as well as the worship houses of minorities, including those of Assyrians, Jews and Greeks.

Many of the minority sects' properties have been returned – decades after they were forcefully confiscated by the Turkish state – while the government also continues to pursue a policy of restoring abandoned historical buildings.

Recent examples of this, a 19th-century church built by the Bulgarian community in Istanbul was restored and reopened earlier this month in a ceremony attended by President Recep Tayyip Erdoğan, Prime Minister Binali Yıldırım and Bulgarian Prime Minister Boyko Borissov. Likewise in 2013, a Bulgarian Orthodox Church was returned along with a 59,000-square-meter piece of land in central Istanbul that once belonged to the foundation running the church.

In early November, Aya Yorgi, another historic church in the city's Edirnekapı district, was reopened after state-funded restoration and marked in a ceremony attended by Turkish and Greek Orthodox dignitaries.

More examples of state-sponsored restoration in recent years are the Great Synagogue of Edirne, the Aya Nikola Church in Gökçeada, the Syriac Catholic church of İskenderun, Diyarbakır's Sur Armenian Protestant Church, the Nizip Fevkani Church in Gaziantep and the Taksiyarjis Church on Cunda Island.