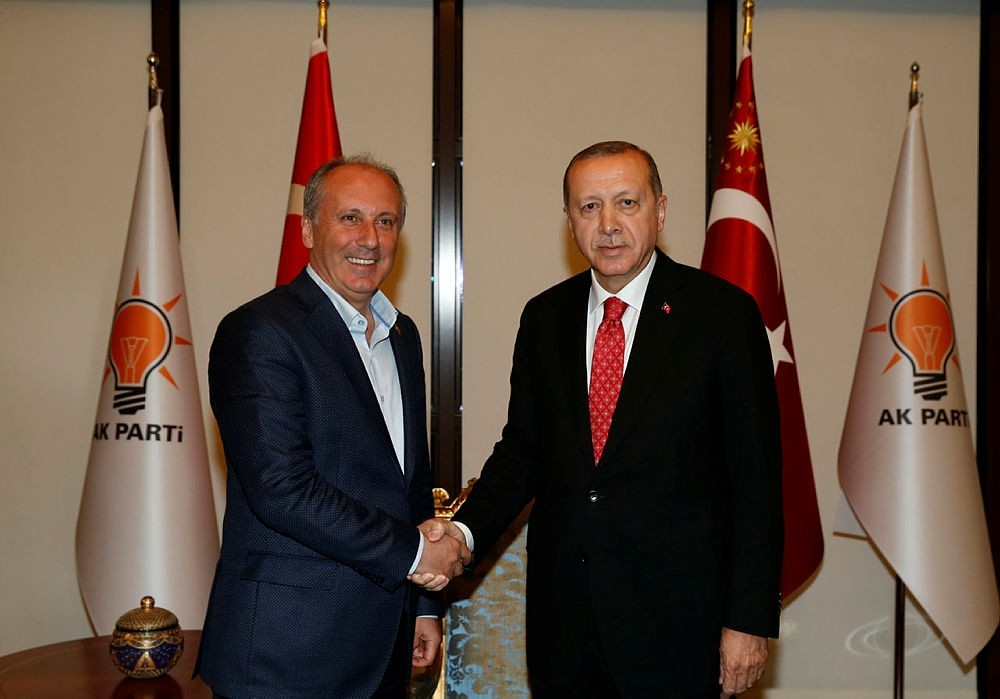 President Recep Tayyip Erdogan, right, and presidential candidate for the main opposition Republican Peopleu2019s Party (CHP) Muharrem Ince shake hands as they pose for a photo during their meeting in Ankara, Turkey, May 9, 2018. (AA Photo)
by Daily Sabah May 09, 2018 12:00 am

"It was a good chat. They wished each other luck," AK Party Group Deputy Chairman Mustafa Elitaş — who accompanied Erdoğan, AK Party's chairman, during the meeting that began at 9 p.m. and lasted about 40 minutes — told reporters after the meeting.

Ince, who came to the meeting wearing a suit without a tie and was accompanied by CHP's Group Deputy Chairman Engin Altay, did not gave much details about the closed-door meeting.

"We wished success to the chairman and the AK Party. We chatted and exchanged pleasantries," Ince said.

On May 4, the center-left secularist CHP announced Ince, who is a CHP deputy of Yalova province, as its candidate for the presidential race against Erdoğan after long-awaited days. Erdoğan was declared the candidate of the People's Alliance, formed by the AK Party and the Nationalist Movement Party. The nationalist Great Unity Party (BBP) has also announced that they will support Erdoğan.

Prior to his candidacy for the presidential elections, Ince had twice sought CHP chairmanship in 2014 and 2018 party congresses against current CHP Chairman Kemal Kılıçdaroğlu; however, he did not succeed gain enough support from fellow party delegates both times. İnce has been a popular figure in the CHP for his populist and moderately conservative views.

Elitaş said both rivals are also from the Black Sea Region's Rize Province.

Prior to his meeting with Erdoğan, Ince also visited the imprisoned pro-PKK Peoples' Democratic Party's (HDP) former Co-chair Selahattin Demirtaş on Wednesday. The HDP has announced Demirtaş as their presidential candidate.