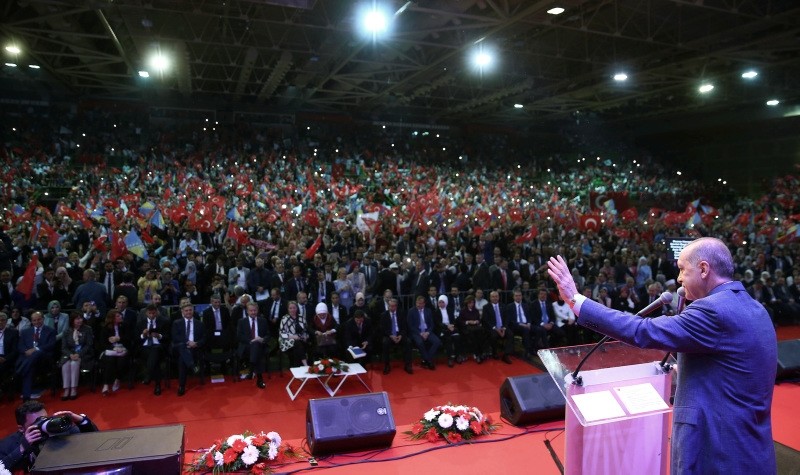 President Recep Tayyip Erdoğan on Sunday called on expatriate voters living in Europe to "show their strength" in the June 24 snap presidential and parliamentary elections.

Addressing more than 20,000 Turkish expatriates gathered at the 6th general assembly of Union of European Turkish Democrats (UETD) in Sarajevo, Erdoğan said: "On June 24, we will not only elect a president and lawmakers but we will also make a choice for the next century of our country."

The Turkish president also urged Turkish people in Europe to take an active role in politics in their countries to counter anti-Turkish sentiment while protecting their values and traditions.

Erdoğan received a warm welcome in the Bosnian capital from both Bosnian Muslims and tens of thousands of Turks who traveled to the city from different parts of western Europe to see their leader.

He pledged to work to provide employment opportunities for Turkish citizens who retired abroad and new programs for their children to learn Turkish.

More than half of the supporters came from Austria and Germany, according to the UETD.

Prior to his address, Erdoğan held a meeting with Bakir Izetbegovic, the Bosniak member of the tripartite Presidency of Bosnia and Herzegovina and announced a multi-billion dollar highway project by joint initiatives of Turkey, Bosnia Herzegovina and Serbia to connect Belgrade and Sarajevo.