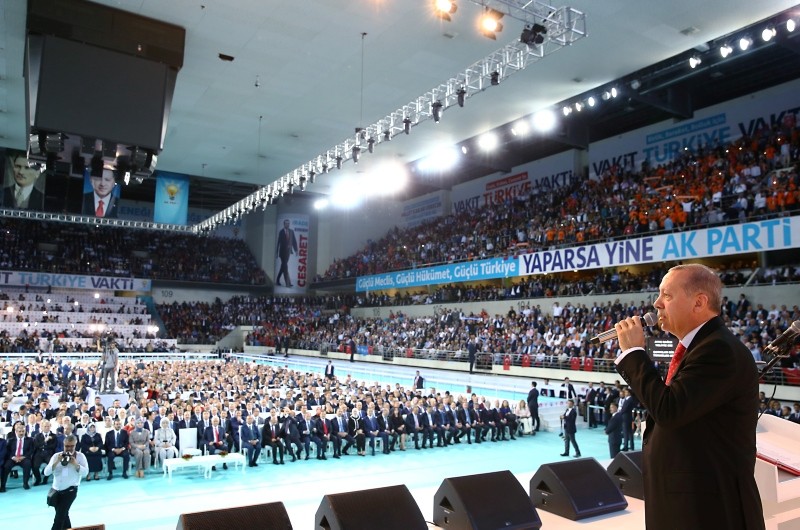 The Justice and Development Party (AK Party) will place great emphasis on environmentalism and eco-friendly policies in the upcoming period by investing in city parks and vast green areas as the election declaration for the upcoming general and presidential elections was introduced yesterday.

Unveiling the AK Party's election declaration in Ankara, the AK Party's chairman, President Recep Tayyip Erdoğan, said his party aims to provide citizens with a greener environment across the country.

"We intend to provide a better quality of life for our citizens through peace and security. In this context, we will give our cities characteristics that make them more livable with smart and green city projects," Erdoğan said.

Being one of the most assertive plans of the AK Party's environmentalist election declaration, Erdoğan said a tremendous city park will be built in the area where Istanbul's Atatürk International Airport is currently located. He said he considers the new park the best plan of the declaration.

Indeed, the large city park, announced by the president as one of the key points in his election declaration, reflects the AK Party's vision for the next five years while governing the country. Erdoğan said the park will be three times bigger than Central Park in New York City and surpass similar parks across the globe.

Prior to yesterday's election declaration, Erdoğan also announced the AK Party's manifesto in Istanbul on May 6 for the fresh era being ushered with the new executive system. In the manifesto, which establishes the framework for the AK Party's broader outlook, Erdoğan vowed to expand freedoms, democracy and welfare in Turkey.

Erdoğan has also been in favor of enhancing environmental conditions, harshly criticizing urban methods that damage greenery and solely rely on construction. "In the end, each step that destroys our ecosystem is catastrophe. I think we must immediately make adjustments," Erdoğan said last year in a speech.

The president also said old stadiums across Turkey will be replaced by projects similar to major city parks, such as those in the provinces of Trabzon and Eskişehir.

Parliament and a strong government at the same time. "We presented our election declaration to the people by saying that it is the AK Party that will do it if anybody," he said.

Noting that the AK Party is entering the new era with a brand new mentality, Erdoğan said it is time for unity and for a new Turkey.

The AK Party's election declaration was divided into seven chapters. The chapters are: The new executive system; strong democracy; people and society; a stable and strong economy; strategic sectors and innovative production; environment, urban management and municipalities; and foreign policy and national security.

The June 24 general and presidential elections are of crucial importance in determining the next five years of the country. Announced by Erdoğan in mid-April, the snap elections will bring together the different faces of the competitors.

In addition, the parties will be able to forge electoral alliances. While the AK Party and the Nationalist Movement Party (MHP) are set to enter the election under the People's Alliance, the Great Union Party (BBP) will join the alliance on the AK Party's list. On the other hand, the Republican People's Party (CHP), the newly established Good Party (İP) and the Felicity Party (SP) will be under their own umbrella.

In the previous November 2015 general elections, which were held after the June 2015 election failed to produce a coalition government, the AK Party obtained 49.5 percent of the vote and formed the government with 317 of the 550 seats in Parliament, while the CHP garnered 25.32 percent and the MHP got 11.90 percent of the vote. The SP and the Patriotic Party (VP) failed to garner enough votes, falling below the 1 percent mark.

Also earlier this month, Erdoğan announced his party's manifesto for the upcoming elections. "Independence, national interest, national security and a conscientious stance, the principles of our foreign policy, will remain unchanged. We will not patronize other countries, just as we do not accept being patronized," the president said at the time, portraying the AK Party's vision for the forthcoming period.

The president also underscored the AK Party's vision on further strengthening the rights of Alevis in the country. Stressing that the AK Party will take the necessary steps with Alevi opinion leaders in a democratic and collaborative manner, Erdoğan said the dialogue will continue to establish research centers.

The president also said Cemevis – houses of worship for Alevis – will be granted legal status in the upcoming term. He underlined that the AK Party was the first party in the history of the Republic of Turkey to hold Alevi workshops. "We took brave steps on the issue of different beliefs and sects apart from different languages," he said.

Even though the exact size of the Alevi population in Turkey remains unknown, they constitute the second-largest religious community in the country after Sunni Muslims. For years, public recognition of the Alevi identity, institutions and the legal status of Cemevis have been common requests made by a variety of groups in the Alevi community. Though Cemevis are the houses of religious rituals for the Alevi minority of Turkey, so far they have no legal status equivalent to that of mosques or churches.

The AK Party's vision for the upcoming term in terms of foreign policy was also introduced. Drawing attention to the Turkey-centered multilateral foreign policy, Erdoğan said Turkey looks to overcome difficulties and differences of opinion with the United States. He added that Turkey is forging strong ties with Russia and places great value on bilateral cooperation.

Growing ties with Africa and Central Asian states were also emphasized. Furthermore, the declaration underlined that Turkey stands for stability and peace in the Middle East.

The declaration put a strong emphasis on elevating Turkish democracy. It pledges to instill a strong sense of democracy in society by raising democratic standards, and increasing rights and freedoms with a participatory approach.

It adds that individual rights and freedoms have been respected by the AK Party governments and that the party has a universal heritage and has made decisions based of constitutional order within the framework of the law.

AK Party governments will continue to embrace all segments of Turkish society within a relationship based on justice and democracy, the declaration says, and has underlined that the differences in society are recognized by the party and will be respected in the new term as societal richness, rather than a matter of conflict.

"In the new term, the Roma citizens' issues will be solved quickly, beginning with employment, housing and education issues, and any basis for discrimination will be eliminated," the declaration says.

The AK Party declaration pledges that the rights and freedoms of non-Muslim citizens will also be protected by law.

On June 20, 2016, the government announced a three-month state of emergency, which has been extended since. During the July 15 coup attempt, the Gülenist Terror Group (FETÖ) attempted to overthrow the government, during which 250 citizens were killed and more than 2,200 were injured.

The government has since said the state of emergency is not imposed on the citizens, but rather a measure for their own security by eliminating FETÖ infiltration in state institutions and thwarting threats posed by the terror groups, including PKK.

The AK Party vowed in the report to provide a human-centered convenient cultural, artistic and physical environment for young people.

The ruling party is considering extensive reforms in education in the new term. In this regard, a new campaign will be launched to increase education quality, which has been regarded as one of the weakest issues of the party since it took power in 2002.

The quality difference between schools will be leveled by forming a "educational quality index." Also teacher quality will be increased with new educational programs, and outdated syllabuses will be upgraded according to necessities of today.

The report said a new exchange program named the "Ibn Khaldun Global Exchange Program" for students will be launched. Turkey currently has two international exchange programs, Mevlana and Farabi. The country is also a member of the Erasmus exchange program.

The AK Party also pledged to open more space for youth in the political arena, especially in local councils. With last year's referendum, the age of election for Parliament was decreased from 25 to 18. Many young people nominated as candidates from different political parties will compete in the June 24 elections.

In terms of culture and art, the government aims to increase state support as well as funding for local administrations to promote cinema, visual arts and other arts.

The AK Party also pledged to further promote the Turkish language worldwide with the aim of adding Turkish to the list of official languages of the United Nations. For this purpose, the government aims to increase the number of Yunus Emre Institutes – the flagship organization that promotes Turkish culture and language abroad – to 100. It has currently 54 offices in 44 countries.

The ruling party also wants to establish cultural centers in every city in Turkey and to embrace more inclusive and innovative libraries. This would include the construction of new libraries for children and increasing the number of bookmobiles. In addition to these, new digital archives will be created to protect heritage and transfer it to the next generation.