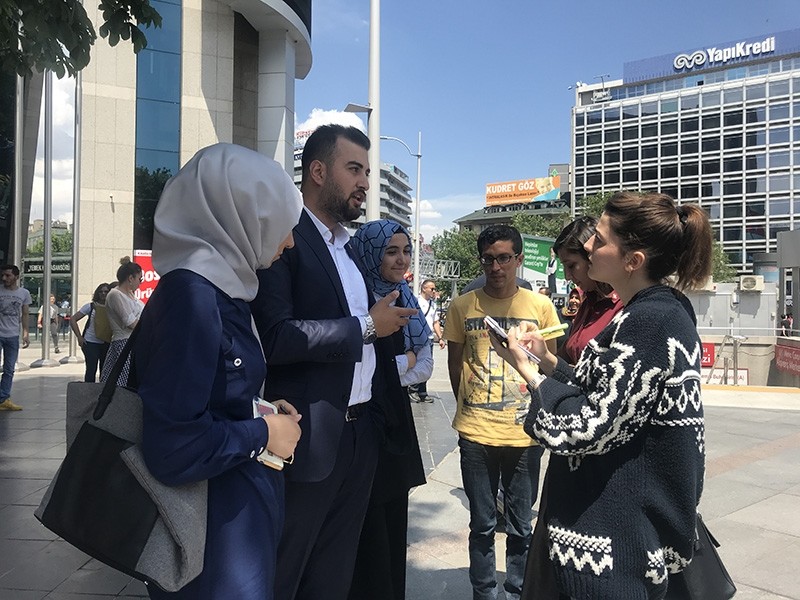 The young electorate of Turkey have emphasized that education, employment policies and election promises will be prominent factors when they head to the polls on June 24.

Talha, a 26-year-old student who works as a student leader in his university, underlined that the Justice and Development Party (AK Party) government has provided many opportunity to college students."The possibilities of housing and scholarships in college obtained by the government [for us] replace our families [responsibilities]. These developments should continue," he said. By underlining the importance of young voters, he said he feels confident under the AK Party government.

In the 16 years of the AK Party rule, the government has removed university fees, opened many new dormitories and raised the amount and quantity of student scholarships. The Youth and Sports Ministry reopened in 2011 through a government initiative, with a new focus. Today, the ministry is providing new chances to millions of young students.

Enes and Asiye, two students, both 20, expressed their gratitude to the government and future prospects for the next term. Asiye who is a journalism student sees a bright future, she said, "By looking at this generation [which was] born and raised during the AK Party rule, I believe that the AK Party is the only party that will contribute more to Turkey."

Enes, a hopeful student preparing for university exams, mentioned his personal experiences since he left high school. "I'm 20 years old and I would have been uninsured at 18 if the insurance period had not been extended," he said.

As a parent of young voters, Ahmet, 62, a father of three, said he had seen the differences between his first and third daughters' school life. "I have three daughters. All of them have received educations. My youngest daughter is still studying in high school. When I look at the past, I see how lucky my youngest daughter is now thanks to school improvements," said Ahmet, a cab driver.

However, Erkut, a 23-year-old graduate student, stated that the biggest problem for young people was the anxiety they faced in finding a job and having a safe future. "I think no party is completely able to meet the needs of young people in this regard. Young people … want a vision of the future where they don't have anxiety and feel safe," he said.

The number of unemployed people aged 15 and above in the country declined to nearly 3.3 million last October, a decrease of 360,000 from October 2016; while the unemployment rate stands at 11.8 percent so far for 2018.According to the 2017 figures of the Turkish Statistical Institute (TurkStat), Turkey's population boasts nearly 13 million youth between the ages of 15 and 24. This figure constitutes 16.3 percent of the total population.

"I'm a business graduate. I can't find work in my field because of the employment problem," said 24-year-old Melih who decided to join the army because of the lack of jobs in his field.

Nineteen-year-old nurse candidate Büşra said there were difficulties for those working in contracted labor jobs. "I think the staff and appointments are inadequate. I have no job now. Employment should definitely be increased. Contracted labor needs to be removed," she said.

On the other hand, 24-year-old student Sinan found his future prospects in line with the Republican People's Party (CHP)'s candidate Muharrem İnce. Sinan said, "I found the promises of the parties to be satisfactory, but I especially think that the promises of Muharrem İnce appeal to young people better."

According to statistics, 1.585 million voters will go to the polls for the first time, while the total number of domestic voters is 57 million. The young electorate has the power to change the results of the elections, according to numbers. The political parties are doing their best to influence youngsters to vote for them.

The ruling conservative AK Party and the right-wing Nationalist Movement Party (MHP) decided to form a People's Alliance for the elections and support President Recep Tayyip Erdoğan as their joint candidate. While the Nation Alliance formed between the CHP, the Good Party (İP), the Felicity Party (SP) and the Democrat Party (DP) is limited to the parliamentary elections, with member parties nominating their own presidential candidates.