Politicians spice up their election campaigns to attract voters during Ramadan 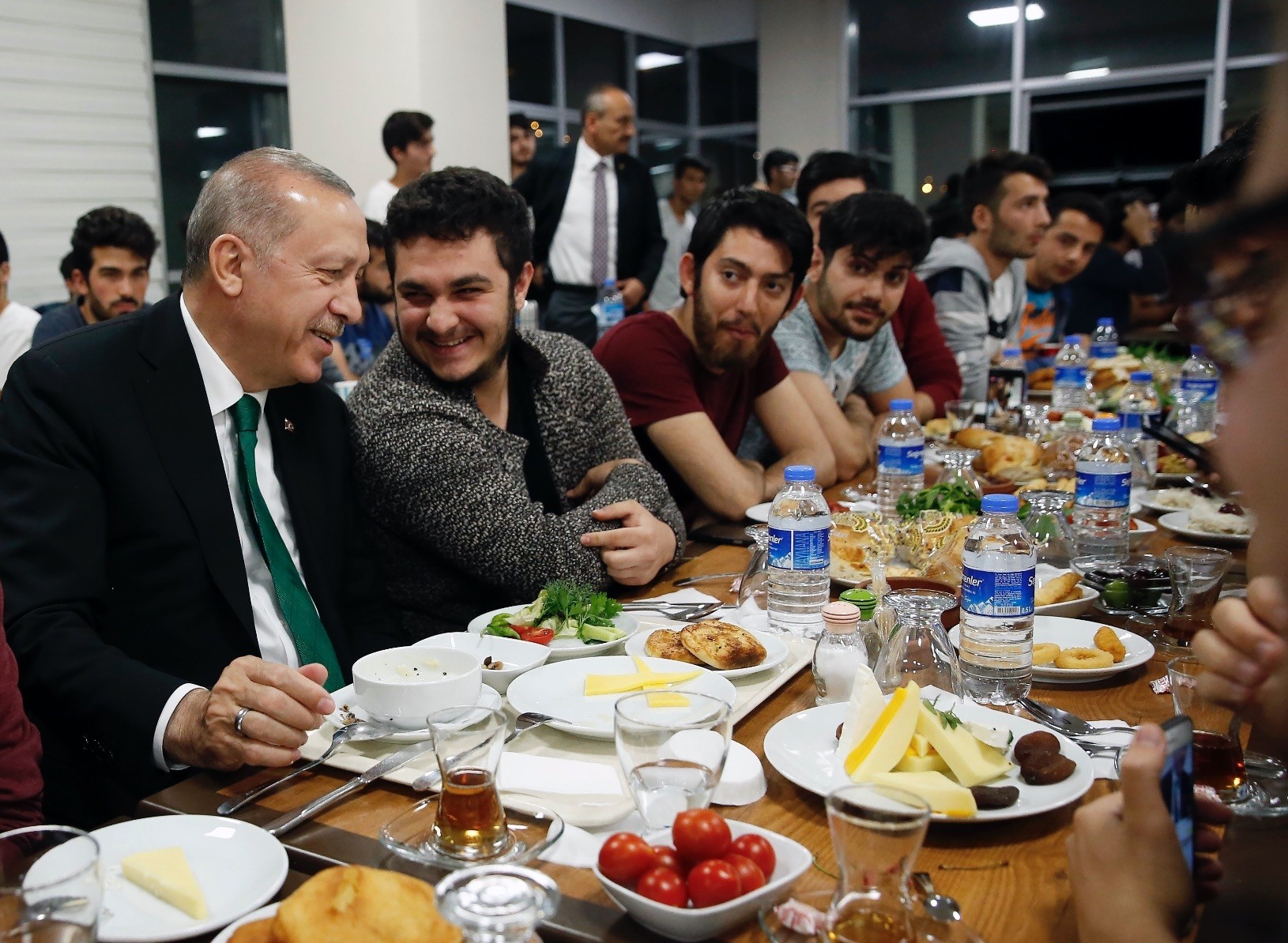 President Erdou011fan joined youth for sahur at a student dormitory in Turkeyu2019s capital Ankara, after receiving an invitation through Twitter on June 1.
by Şeyma Nazlı Gürbüz Jun 15, 2018 12:00 am

Turkish politicians adjusted their traditional political campaigns for the June 24 presidential and parliamentary elections as the majority of the campaign period coincided with Ramadan, Muslims' holy month of fasting.

Traditionally, Turkish politicians have organized rallies throughout the country, visiting provinces where they would speak to the public for an hour or two in the midday. And for the most part, the rallying tradition remained the same for most political parties. However, it has gained some new twists.

First of all, politicians have started to visit more provinces in a day, sometimes three provinces in a row, compared to previous elections. For instance, on June 11, President Recep Tayyip Erdoğan held rallies in Kocaeli, Niğde and Bursa provinces, respectively.

Kicking of his election campaign from the main opposition Republican People's Party (CHP) stronghold of İzmir on April 28, President Erdoğan is expected to visit around 50 provinces and more than 20 districts by the end of the election season. So far, he has visited 26 provinces.

Although rallies in midday were being held as usual, considering that fasting during the summer months might have caused a decrease in the number of participants, politicians started to hold rallies or smaller meetings with people during iftar and sahur, the pre-dawn meal before fasting.

On June 9, one of these rare nighttime election events took place at İnce's rally, attracting tens of thousands of people in Istanbul's upscale Bağdat Avenue. Held in Istanbul's Asian district of Kadıköy, which traditionally votes for the center-left and secularist CHP by a landslide, the rally managed to attract people of various profiles, from those waiting for sahur, to those attending the rally as an alternative to cap their Friday night entertainment. President Erdoğan also organized many iftar meetings, especially in the AK Party's local branches in the provinces that he visited.

However, despite expectations which predicted that participation rate would decrease compared to previous elections, politicians still managed to reach a wide range of people, especially in their strongholds.

On June 2, President Erdogan held a rally in the central Anatolian province of Konya, which is also an AK Party stronghold and gave the party 65.5 percent of votes in the Nov. 2015 general elections. Three years after those elections, Konya seems to preserve its stance towards the party by attending President Erdogan's rally in record high numbers, despite the hot weather and Ramadan. According to security records, 320,000 people attended Erdogan's rally, which was a lot higher than the 2015 AK Party rally numbers, which stood at 250,000.

Akşener could not keep up with her rivals during Ramadan rallies

Meral Akşener brought her innovative approach to the rallies by basing them on what she calls the "cheesecloth revolution," in which she collects cheesecloths from each province she visits, claiming that they represent innocence. Cheesecloths are traditional scarfs that are worn by Anatolian women. However, Turkish media outlets reported multiple times that so far Akşener's rallies in some provinces, such as Samsun and Afyon, have been unable to fulfill the expectations; since people's interest levels were very low. Sometimes the number of participants were as low as a thousand people, like in the central Anatolian Çorum province, which is a very low number compared to the general average of the rallies of her rivals.

Ramadan also provided new opportunities for politicians to attract young voters, which constitute a large voting base, since there are more than 10 million voters between the ages of 18-25. Erdoğan, for instance, joined the youth for a sahur meal at a student dormitory in Turkey's capital Ankara, after receiving an invitation through Twitter on June 1. Responding to a sahur invitation from a student on Twitter by saying that he is coming "if the tea is ready." The president posted a video of the meal he had with the students at the dormitory. Excited to see the president, students welcomed Erdoğan, had the opportunity to chat with him and take selfies during his visit. The president also attended a sahur that was organized by First Lady Emine Erdoğan at the presidential complex in Ankara for the young students on June 7.

İnce, on the other hand, aimed to attract the youth through both social media and actions that might elicit sympathy from young people, instead of iftar or sahur meetings. Using his Twitter account quite actively, İnce often tweets on education, particularly about wishing students well on their college or high school entrance exams. Some others were on more specific topics such as the decision on the division of the Cerrahpaşa Medical School from Istanbul University, which caused a reaction among some students, especially on social media.

İnce criticized the decision after the dean of Cerrahpaşa was dismissed from his duty, by saying that these kinds of issues are the reason he has become a candidate for the presidency and received more than 100k likes, proving that touching on issues relevant to the younger voters is what works on social media. Sometimes, İnce goes a step further and even directly calls young people of the country "my children, my students," referencing his past as a physics teacher. Another contribution by İnce to the changing political campaign atmosphere was to ride a bicycle that was given as a present to him, on the stage during a rally in Samsun. He also shared the video clip of him riding the bicycle from his Twitter account.