Opposition's vow to return to parliamentary system not in line with public demands, experts say 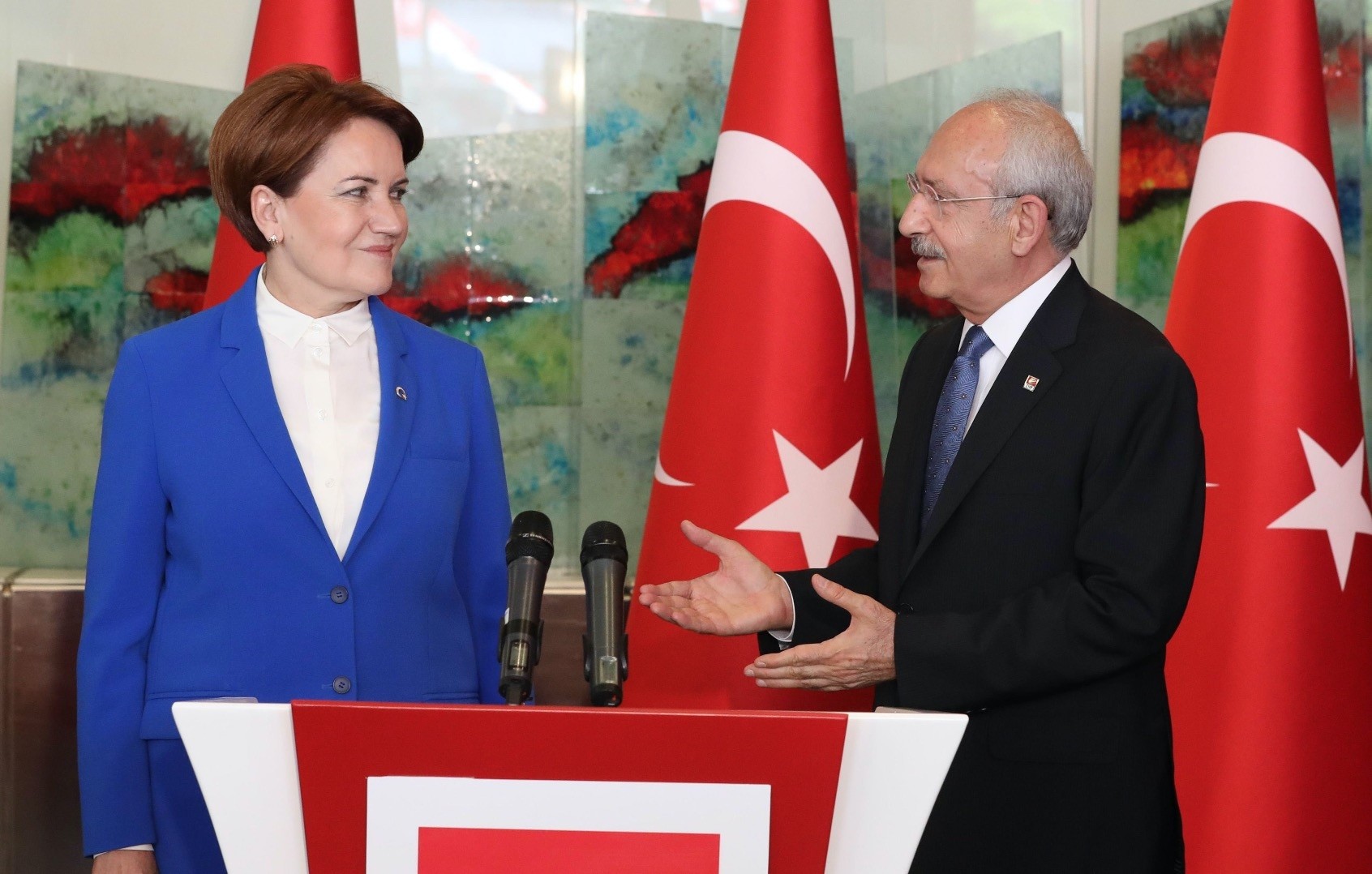 Leader of the main opposition Republican People's Party (CHP) Kemal Ku0131lu0131u00e7darou011flu, with leader and presidential candidate of the opposition Good Party (u0130P), Meral Aku015fener, speak at a meeting at CHP headquarters in Ankara, June 4.
by Gülçe Başkaya Jun 19, 2018 12:00 am

The opposition bloc's Nation Alliance, led by the main opposition Republican People's Party (CHP), has accelerated its efforts to return the parliamentary system, while citizens and the legal system demand the opposite. Experts say the promise is mere electoral propaganda and will not be executed in the end, especially considering that it does not reflect the public's wishes. "The efforts of the opposition bloc to return to the parliamentary system are mere rhetoric for election campaigns," political analyst Nebi Miş from the Foundation for Political, Economic and Social Research (SETA) think-tank said.

According to Miş, the opposition presidential candidates are running their campaigns according to the new system and no political action is in the works to cancel the implementation of the new presidential system. He also added that re-transition would require a new referendum and unity among the opposition - which does not exist.

The parties in the Nation Alliance, namely the CHP, the Good Party (İP), the Felicity Party (SP) and the Democrat Party (DP), promised to return to the parliamentary system in their election campaigns, while the April 16, 2017 constitutional change referendum secured the people's choice to transform Turkey's system from a parliamentary system to a presidential one.

In the April 16, 2017 referendum, Turkey voted in favor of a major constitutional reform package, with 51.41 percent in favor. The new system is scheduled to take effect with the upcoming presidential election on June 24. As the CHP advocated for the "no" camp during last year's referendum period, CHP leader Kemal Kılıçdaroğlu and İP Chairwoman Meral Akşener have vowed to bring back the parliamentary system in their election declarations if they win.

"Turkey has been discussing this transition for 40 years, and political systems can only be converted by a referendum and a charismatic leader. ... After that, the transition from the presidential to a parliamentary is not easy. It's necessary to persuade half of the country, to hold a referendum and to prepare a new Constitution. ... In addition, it will be impossible for the opposition to return to the old political system since its own base is already fragmented," Miş added.

Furthermore, according to Istanbul-based A&G Research Company President Adil Gür, the opposition bloc's efforts have not been supported by the people. "Although the opposition bloc says that they will return to the parliamentary system if they win, according to the research, people do not want such a move. When we asked them [the people] what the biggest problem in Turkey was; none mentioned the new system and no one said they wanted to remain in the old system," he said.

Gür added that, despite what the opposition claims, technicalities regarding a majority vote from Parliament also factors into the decision. "This plan is not practical. They need to collect the signatures of 400 deputies in Parliament to submit the proposal, but it would almost be impossible to obtain such a majority according to the polls," Gür said.

On the opposite side of the Nation Alliance is the People's Alliance, formed by the ruling Justice and Development Party (AK Party) and the Nationalist Movement Party (MHP). The AK Party and the MHP are supporting the re-election of incumbent President Recep Tayyip Erdoğan, while other candidates were declared presidential hopefuls by their respective parties.

Their "return to the parliamentary system commission" set up by the parties that formed the Nation Alliance will soon issue a joint declaration titled "Strengthened Parliamentary System" and plan present it with a legislative proposal after the elections.

Miş also said the Nation Alliance has built its rhetoric on the promise of returning to the parliamentary system because it was the only common issue between the four parties. "It was the easiest compromise the Nation Alliance was able to make and unite around, so they chose it. The opposition only produces discourse for delusive politics," he added.

The Nation Alliance is limited to the parliamentary elections, while the People's Alliance has united for the presidential elections as well, both which will be held June 24.

"We can easily say that there are many obstacles in front of the fulfillment of this promise as an election strategy or tactic. For example, the CHP's candidate for president, Muharrem İnce, made statements contradicting his party regarding the return to the parliamentary system. In fact, he has said when he wins the elections, he will not return to the parliamentary system immediately. He stressed that it takes time," Mustafa Altunoğlu, a political science academic at Eskişehir Anadolu University, said.

Before being nominated by the CHP administration to run as the party's presidential candidate, İnce, a deputy from the northwestern province of Yalova, unsuccessfully ran twice against CHP Chairman Kemal Kılıçdaroğlu in party congresses in 2014 and 2018. In total, 790 delegates voted for Kılıçdaroğlu, while İnce received 447 votes. A total of 1,253 delegates out of 1,266 cast their votes in the 2018 party convention. However, the heated debate between Kılıçdaroğlu and İnce has created a deadlock in the CHP leading up to the elections.

Additionally, Altunoğlu also mentioned that Turkey's legal system is not designed to make this transition easily, requiring several steps to make the switch. "The opposition needs to get a majority in Parliament to change the Constitution. ... Otherwise, their attempt will be futile. Considering the general consensus before the short run up to elections, it's not easy to achieve; that is, to obtain a reasonable majority in Parliament," he said.

The CHP has received an average of 25 percent of the votes in parliamentary elections in the past decade. Kılıçdaroğlu is infamous for his losses in elections against his strong rival Erdoğan since he became the chairman of the party. He has come under fire from within his party as he has lost the national vote eight times in elections.