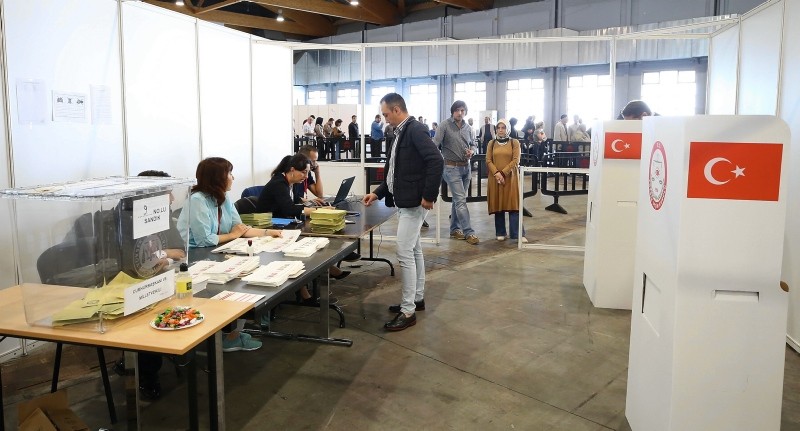 A Turkish voter speaks with ballot box officials while dozens of others are waiting in line to cast their votes at the Brussels expo center in Belgium, June 15, 2018. (AA Photo)
by Daily Sabah Jun 20, 2018 12:00 am

The voting abroad process as part of the June 24 elections have been completed with the most recent figures pointing to an all-time high participation rate.

According to the latest data provided by the Justice and Development Party's (AK Party) International Coordination Center for Foreign Election the participation rate reached 48.78 percent at this time. Voting at customs will continue until June 24. By then it is expected that the participation rate will exceed 50 percent, which points to a record in Turkish political history.

The three countries with the highest participation were Germany, France and the Netherlands. Germany was the country with the most votes with 717,992 voters. The Embassy of Stuttgart was the polling station that has the most participation with 81,959 voters. Germany has also been the center stage for controversy as opposition parties such as the pro-PKK Peoples' Democratic Party (HDP) and the Republican People's Party (CHP) have been allowed to carry out election propaganda while the ruling Justice and Development Party (AK Party) was banned from campaigning.

The Australian Embassy in Canberra was the representative with the highest increase in attendance by 73.7 percent. Turkmenistan, on the other hand, experienced the biggest drop with a 48.1 percent decrease compared to the previous election.

The ballots will be brought to Turkey by Turkish Airlines and will be kept at a convention hall in Ankara until the end of voting in mainland Turkey on June 24.

The head of Presidency for Turks Aboard and Related Communities (YTB), Abdullah Eren, said Saturday that they carried out a campaign for expats, under the slogan "Strong Diaspora, Strong Turkey."

He added that after the elections a subcommittee in the Parliament will be established for the Turks abroad. "In addition, a commission for our citizens abroad will be established in regions where we have consulates," Eren said at the Turkish consulate in Cologne, Germany.