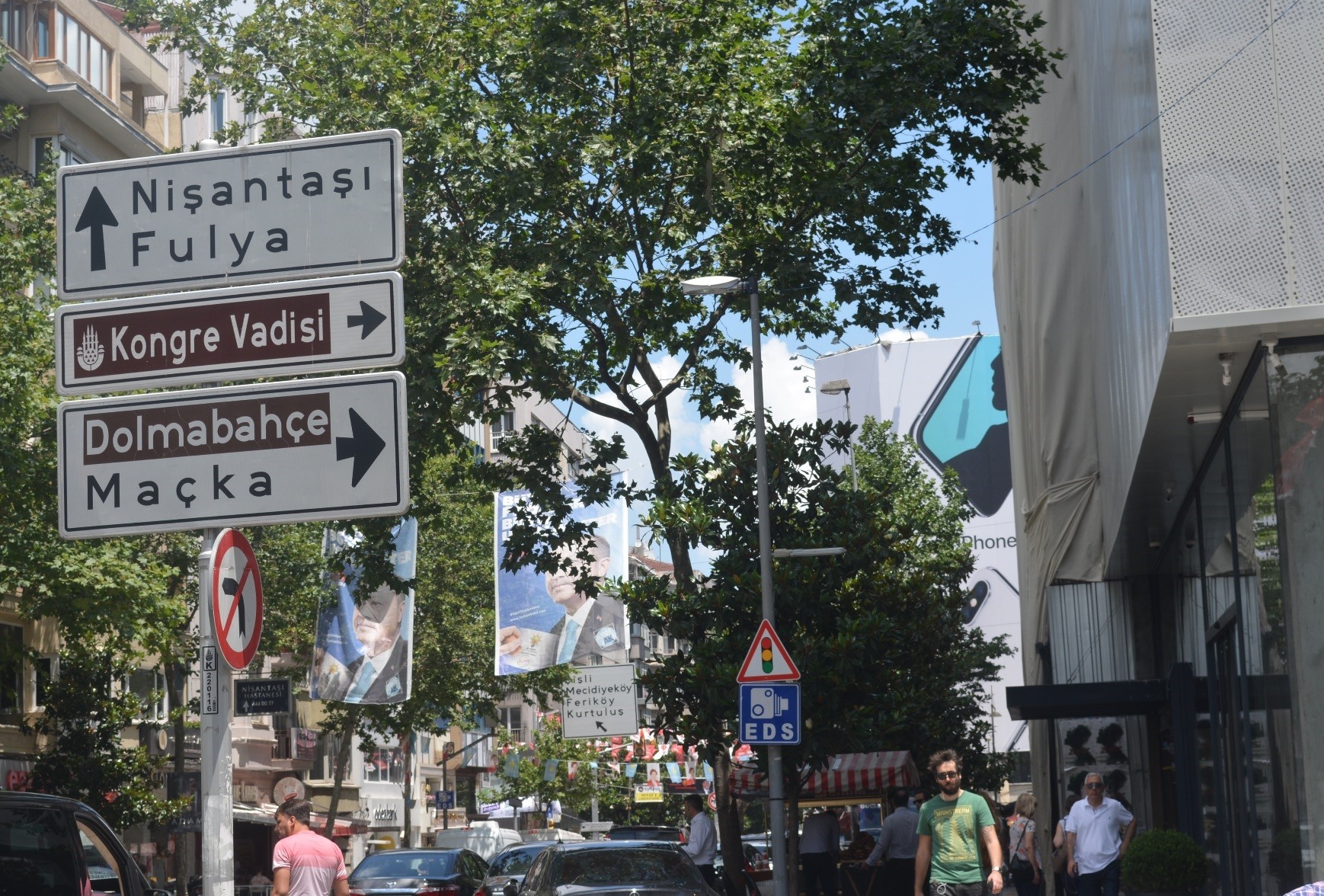 Despite a high standard of living, Nişantaşı locals said their political preferences were primarily influenced by the economy

With days left to the June 24 presidential and parliamentary elections, the economy seems to be on the minds of all. This is especially true concerning the posh neighborhood of Nişantaşı, on the European side of the city. Known more for its glitzy shops, bars and high society types with the fanciest of dresses, Nişantaşı proves that you can never have too much, with its residents highlighting the importance of the health of the economy as their primary concern behind their voting preferences.

The neighborhood, which is a small part of the Şişli municipality, welcomes you with a convoy of several political parties' election buses - a strangely harmonious setting of high-end stores combined with campaign banners, flags and brochures.

The history of the neighborhood dates back to the 19th century, and the area has hosted elite locals since then. The residents of Nişantaşı consist of Turks that migrated from the Balkans in the beginning of the 20th century as well as people of Greek, Jewish and Armenian origins. The neighborhood is also one of the regions in Istanbul that has the biggest number of foreign residents. Nişantaşı has also made a name for itself for being a fashion center with its high-end stores that includes Channel, Armani and Prada as well as smaller designer boutiques. There are many coffee shops, pubs and restaurants that make the neighborhood an entertainment center for the elite of the city.

Nişantaşı is often seen as an isolated, exclusive place, which has lost links to the rest of the nation. However, even the simplest of questions can elicit a similar response as those from other neighborhoods.

All of the prosperity does not seem to bring economic relief and satisfaction to the locals of Nişantaşı since they are still being affected by the fluctuations in the economy, so much so that their main concern for the future of the country is its economic condition, which seems to also be the main determinant for their voting preference.

However, the same economic concerns seem to generate completely different responses. Some prefer to support the opposition for their promises on solving economic problems, while others continue to support the ruling Justice and Development Party (AK Party), hoping that stability will bring much needed reprieve.

Münevver Eryeşil, a 42-year-old woman, believes although the country has made considerable progress in the last 16 years, the economy should have been better. "The minimum wage is very low. It is impossible for one to make ends meet with that amount of money," Eryeşil said. "Still," she added, "compared to past, our hospitals are cleaner, there is transportation everywhere and Istanbul is much more beautiful. Yet, the support for needy people is definitely necessary." She further expressed that she is a supporter of the AK Party and hopeful that everything will be better in the future.

"Low income is the biggest problem of the country," said Yakup, who is a college student and trying to follow the election process closely. "As a matter of fact, when I watch the speeches of the presidential candidates, I have to admit that Muharrem İnce [Republican People's Party (CHP)'s presidential candidate] attracts me," Yakup said, noting that the momentum built up by İnce in social media had influenced him.

"However, in the last 16 years, the AK Party has built a system. Although this system has not been going very well in the last few years, I believe that if it is fixed, it will be fixed by the ones who built it in the first place," he said, highlighting that despite attractions from other candidates, he will stick with his former political affiliation.

Hakkı Kılıç 42, who works at the Foundation of Disabled People also expressed his discomfort over the diminishing purchasing power of people while adding that because of this, he has lost his trust in politicians.

"I'm not buying any words of the presidential candidates. Only Erdoğan has kept some of his promises. The others, however, only have meaningless dreams. They try to turn the country back to the dark political atmosphere of the 1990's," Kılıç said in reference to the decade dominated by coalition governments and economic crises.

Yet, not everyone in Nişantaşı believes in the current government when it comes to the economy. 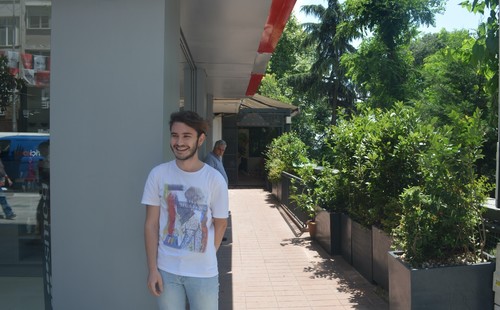 "The biggest problem of Turkey is definitely the economy," said Ata, 20, a college student studying journalism. "When you go to a supermarket, you cannot spend less than 100 Turkish liras, which, I believe, is not normal. And, I have to emphasize, this number is for basic needs, not for luxury spending," adding that because of these problems, he focuses on the promises of the presidential candidates that touch more on the economy.

Ata finds İnce's pledge to invest in youth and industry persuasive while expressing his still dire outlook for the future of the country.

Nişantaşı is known as a CHP stronghold, just like the rest of the Şişli neighborhood. In the November 2015 elections, CHP received the largest amount of votes from the neighborhood with 61.8 percent.

In the larger Şişli municipality, the support for the CHP was 48.74 percent. This picture does not change when it comes to local elections as well. The municipality has been governed by the mayors from secularist parties such as CHP and the Democratic Left Party (DSP) since 1999. Still, it must be mentioned that when explaining their political views, people of Nişantaşı seem to be quite moderate rather than hardcore fans of one party or another.

Peer pressure is another factor that needs to be taken into account. Saadet, who said she worked for the Şişli municipal government: "Since I have some sympathy for the President [Recep Tayyip] Erdoğan and that's why some people in my environment think I'm repellent. I have trouble in expressing my thoughts to people who have opposing political views." She said of some of her friends who were pushing her to change her vote. "Yesterday, I was accosted by a male friend," said Saadet, "While I was minding my business, he walked towards me and insulted me for being an AK Party supporter." When she was telling how impolite her friend was to her, she turned to Daily Sabah's male reporter and said "don't take it the wrong way but men can sometimes be quite rude."

"To be honest, I don't know much about politics, but I know that you cannot achieve much through violence," she said.

Over the years, Nişantaşı has surprisingly become one of the most prominent supporters of the pro-PKK People's Democratic Party (HDP). During the November 2015 elections, 17 percent of the electorate voted for the HDP, which had a national support of 10.8 percent. The main reason why the HDP received such high support was to help the party pass the 10 percent threshold to enter Parliament so that it could undercut the AK Party's parliamentary majority. However, for the June 24 elections, this support seems to be diminished remarkably since no one interviewed even mentioned the party's name.

Education was another point that seems to be a concern for the locals of Nişantaşı, like 30-year-old Okan Arslan. 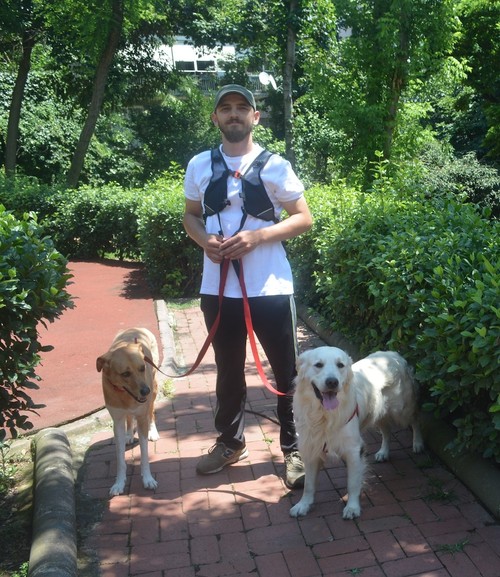 "The lack of education and unaware individuals and parents are the biggest problem of Turkey," Arslan said. "This is why I support Meral Akşener, because of her promises on education," he added while expressing it is not impossible for these promises to come true.

Other than the economy and education, the existence of refugees was another topic that emerged as a concern for the people of Nişantaşı, as part of an overall effect on the economy. "I'm not comfortable with the fact that our state takes care of the Syrian refugees with my taxes," Belgin, a 40-year-old civil servant, said.

"I'm already earning very minimum amount of money. How can I also feed them?" she asked, adding that since she fears losing her job, she cannot express her trouble over the issue out loud. Saniye, who is a friend of Belgin also agreed with her by nodding her head. "Taxes already takes most of all our money. Yet, Syrians get shopping cards for their needs," she said while expressing that this is unfair for them.

Both women also expressed that they are still working as subcontractors despite all the promises that were given by the politicians previously.

"We are sick of living with the fear of losing our jobs. We don't have any guarantee in our lives," Belgin said.