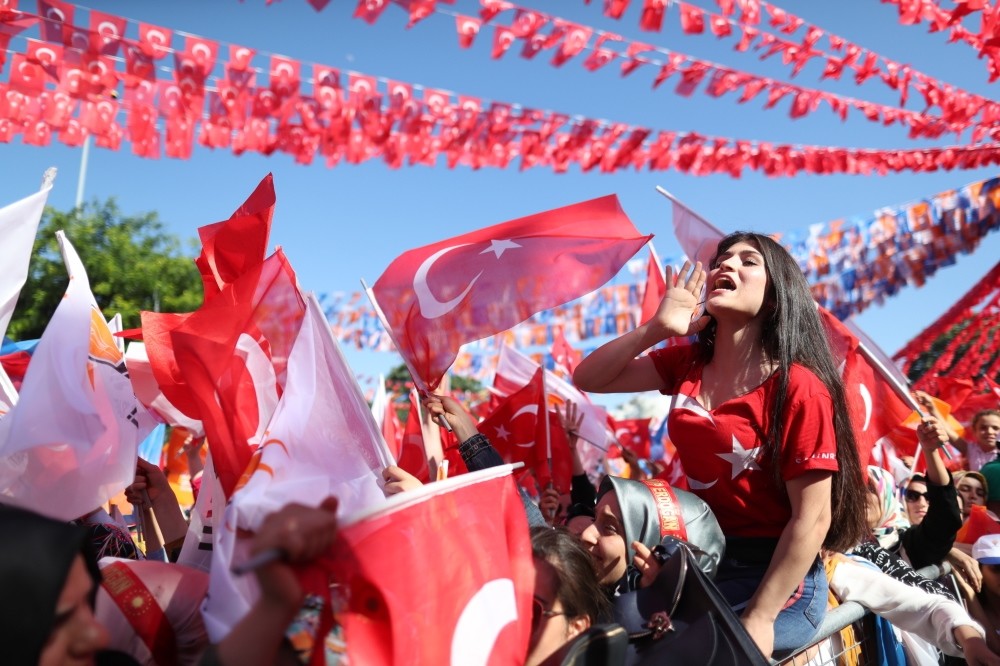 As soon as the snap elections were announced in April, Turkish political parties began their campaigns and filled the streets with election buses, campaign banners, flags and brochures.
by Şeyma Nazlı Gürbüz Jun 23, 2018 12:00 am

Turkey ready for the elections on Sunday, leaving the lively atmosphere of election campaigns behind

Turkey will vote for the future of the country by choosing both a president and parliamentarians on June 24. The vote marks the end of the election campaigns that have created a lively atmosphere across the country for more than two months.

As soon as the snap elections were announced in April, Turkish political parties kicked off their campaigns. Despite the limited time before the election day and that it coincided with the holy month of Ramadan, politicians managed to come up with dynamic schedules that enabled them to reach as many people as possible.

Rallies were the main part of the campaigns, alongside convoys of election buses that constantly played campaign songs and the colorful banners and flags that lined the streets. There are 56,322,632 registered voters and 180,065 ballot boxes across the country. Voting is scheduled to start at 9 a.m. and continue through 5 p.m.

Voters will be able to cast their ballots after they show their ID cards or any other official identification document. It will be forbidden to enter the voting booth with photo or video cameras and mobile phones. Voters will cast votes on two separate ballots in the same envelope, one for the presidential and one for the parliamentary elections.

After the voting ends, ballots cast for the presidential candidates will be counted first. For the first time, elections officials will collect ballots from the homes of voters with mobility issues due to old age, poor health or disabilities. Currently 17,000 of such voters exist.

Traditionally, Turkish politicians organize rallies throughout the country and visit provinces to speak to the public for an hour or two during the day. This trend persisted but also saw new twists due to the campaigns' short time frame and Ramadan. Thanks to these adjustments, the initial participation rate for the rallies, which was predicted to decrease compared to previous elections, did not happen, especially in the parties' strongholds.

In addition to the classical, old-fashioned rallies, politicians also began to hold rallies or small-scale meetings with people during iftar and sahur meals, considering that fasting during the summer months might cause trouble for the people who would like to attend the rallies. On June 9, one of these rare nighttime election events took place for İnce's rally, attracting tens of thousands of people who were either waiting for sahur or their usual Friday entertainment in Istanbul's upscale Bağdat Avenue. President Recep Tayyip Erdogan also organized many iftar meetings, especially in the Justice and Development Party's (AK Party) provincial branches in the provinces that he visited.

Another interesting twist to campaigning this election season were the multiple city visits in a single day by politicians, sometimes even three provinces in a row, compared to the previous elections. For instance, on June 11, Erdoğan held rallies in Kocaeli, Niğde and Bursa provinces, respectively. Kicking off his election campaign from the main opposition Republican People's Party (CHP) stronghold of İzmir on April 28, Erdoğan is expected to have visited around 50 provinces and more than 20 districts by the end of the election process.

CHP presidential candidate Muharrem İnce also had a very intense election campaign schedule. In one instance İnce held five rallies, including one during an iftar dinner, in five different districts of Istanbul on June 10. Good Party (İP) presidential candidate Meral Akşener also brought her own twist to the rallies by basing them on what she called the "cheesecloth revolution" in which she collected cheesecloths from each province she visited, claiming that they represent innocence. Cheesecloths are traditional scarfs worn by Anatolian women. There are six candidates running for the presidency: Recep Tayyip Erdoğan for the People's Alliance, formed by Turkey's ruling Justice and Development Party (AK Party) and the Nationalist Movement Party (MHP); Muharrem İnce for the CHP; Selahattin Demirtaş for pro-PKK Peoples' Democratic Party (HDP); Meral Akşener for the İP; Temel Karamollaoğlu for the Felicity Party (SP); and Doğu Perinçek for the Patriotic Party (VP).

These new ways of meeting with people also created new opportunities in reaching different segments of the public, particularly youth, who constitute a big voters base. There are more than 10 million voters between the ages of 18-25. Erdoğan, for instance, joined the youth for a sahur meal at a student dormitory in Turkey's capital Ankara after receiving an invitation through Twitter on June 1. Responding to a sahur invitation by a student on Twitter by saying that he is "coming if the tea is ready," the president posted a video of the meal he had with the students at the dormitory.

Excited to see the president, the students welcomed Erdoğan and had the opportunity to chat with him and take selfies during his visit. İnce also managed to reach young voters by benefiting from the advantages that social media provides. Instead of iftar or sahur meetings, İnce was particularly good at using his Twitter account as a campaigning tool. His tweets mainly focused on education, particularly on sending well wishes to students before their college or high school entrance exams, as well as touching on the problems that students from every age might face.

Sometimes, İnce went a step further and even directly called the young people of the country "my children, my students," referencing his past as a physics teacher. Another contribution by İnce to the changing political campaign atmosphere was to ride a bicycle given to him as a present on stage during a speech he was giving at a rally in Samsun.

Despite the relatively low interest, some parties, particularly the AK Party, continue to hold rallies with the Prime Minister Binali Yıldırım throughout the country, showing the party's seriousness over the issue.

Sunday will witness the race of eight political parties aiming to get seats on Parliament: AK Party, CHP, HDP, Free Cause Party (HÜDA-PAR), İP, MHP, SP and VP. However, for the first time in Turkish history, political parties will go to elections by forming alliances. The AK Party and the MHP have formed an alliance named the People's Alliance, while the CHP, the İP, and the SP have formed the Nation Alliance. In general elections, a political party must receive 10 percent of votes nationwide for its candidates to win a seat in Parliament. Now, only the alliance needs to pass the 10 percent threshold for the parties to claim seats in Parliament.

Some 1.49 million expats voted in a 13-day period between June 7 to June 19 at 123 Turkish missions abroad. Expat votes have been transported to Turkey and will be counted at the same time as the votes cast domestically on June 24. Balloting at customs gates also began on June 7 and will continue through election day. On the day of the elections, news media organizations will not be allowed to broadcast any political advertising, predictions or comments about the elections until 6 p.m. Between 6 p.m. and 9 p.m., media outlets will only be able to publish official announcements about the elections issued by Supreme Election Council (YSK).