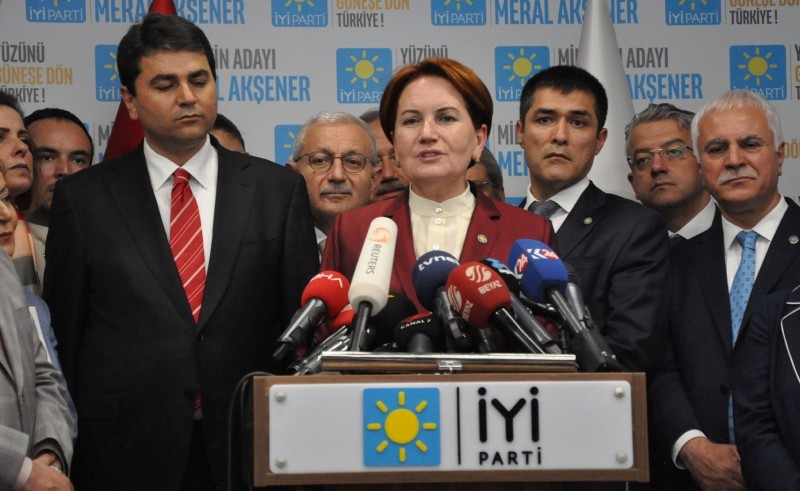 Meral Akşener, the chairwoman of the Good Party (IYI Party - IP) broke her silence Tuesday after the June 24 elections, claiming success in first remarks while announcing that she will stay in her position.

Speaking at the party headquarters in Ankara after the IP's General Executive Board meeting, Akşener said that the party administration decided that she will continue her role as the head of the party.

Akşener and her IP's election performances were widely speculated before the elections since they had not been tested before at the polls. She received 7.3 percent of the votes, 1.3 million votes fewer than her party, which received 10 percent of the vote in the parliamentary race. This performance led to questions of whether Akşener would resign as the head of the party, since her candidacy for president excluded her from holding a seat in the parliament.

The right-wing IP was a part of the Nation Alliance formed by the main opposition center-left secularist Republican People's Party (CHP), Islamist-conservative Felicity Party (SP) and the Democrat Party (DP), which participated in the elections under the IP's list. The Nation Alliance gained 33.9 percent of the vote while the People's Alliance, formed by the ruling Justice and Development Party (AK Party) and Nationalist Movement Party (MHP), received 53.7 percent and pro-PKK Peoples' Democratic Party (HDP) received 11.7 percent.

Stressing that the party was launched only eight months ago, Akşener said their performance at the polls was a success, noting that the IP was the only party that did not receive financial support from the state for that reason.

In his first remarks after the elections, CHP's Muharrem Ince, the runner-up in the presidential race with 30.6 of the votes, said that other opposition parties received less votes than he expected. Answering a reporter's question in regard to Ince's comments, Akşener said she disagrees with Ince, noting that the "centennial" CHP received only 22 percent. She added that 50-year-old MHP, from which the IP split after a heated leadership debate with 21-year-long leader Devlet Bahçeli, received 11 percent.

Akşener said that this result is just the beginning for the IP and that the party has placed itself in the center of Turkish politics.

Meanwhile, Yusuf Halaçoğlu, a former deputy from the central province of Kayseri who switched from the MHP to IP but failed to appear on the party's candidate lists for the June 24 elections, rejected Akşener's success claims.

In messages posted on his Twitter account, Halaçoğlu said: "We fought to prevent one-man regime and return to parliamentary system. In the end we couldn't make it. Now IP administration comes out says we've succeeded. Did we set out to become parliamentarians? How did you succeed? You came forward to become the president but received 7 percent of the votes. Is this success?"

The IP, which mostly consists of former MHP dissidents, was founded in October 2017. Akşener was a prominent figure among MHP dissidents who heavily criticized the policies of Bahçeli, after the general elections on June 7 and Nov. 1, 2015. The intraparty clashes ended after the dissidents were dismissed from the party after a heated judicial process.