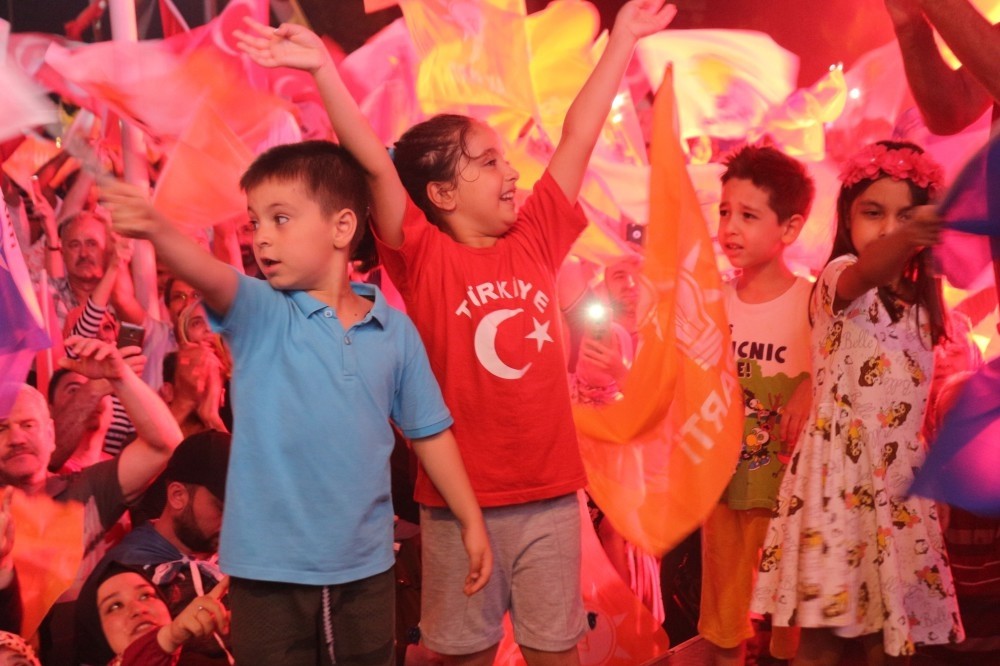 Festival-like celebrations took place across the country after a clear victory was announced for the re-election of the incumbent President, Recep Tayyip Erdoğan and the People's Alliance, formed by the Justice and Development Party (AK Party) and the Nationalist Movement Party (MHP) on Sunday's historic presidential and parliamentary elections. After the results were announced, thousands of Erdoğan supporters took to the streets and celebrated in almost every corner of the country, while major provinces such as the capital Ankara and Turkey's culture and commercial capital Istanbul witnessed historic moments. Erdoğan claimed a win with 52.6 percent in the presidential elections, while the People's Alliance secured 344 parliamentary seats, gaining the majority in the 600 seat Parliament.

Erdoğan was followed by the Republican People's Party (CHP) candidate Muharrem İnce as the closest rival with 30.6 percent of the votes, according to unofficial results with 99.9 percent of the ballot boxes opened. The official election results will be announced on July 5, Turkey's Supreme Election Council (YSK) said yesterday. Erdoğan addressed thousands of supporters in Istanbul, where he cast his vote, late Sunday, and later traveled to the capital Ankara to address the thousands waiting for his victory speech at AK Party's headquarters. "The winners of the June 24 elections are Turkey, the Turkish nation, sufferers of our region and all the oppressed in the world," Erdoğan said during his address to the nation, and added that democracy had triumphed with high participation rates in the elections.

The president also thanked the partner party in the People's Alliance, the MHP, for their support.

"I would like to express my gratitude to my people, my brothers and sisters who put their trust in me, my alliance and my party," Erdoğan said.

Erdoğan said he also received the citizens' message in the polls, as AK Party received less votes than himself as the presidential candidate. 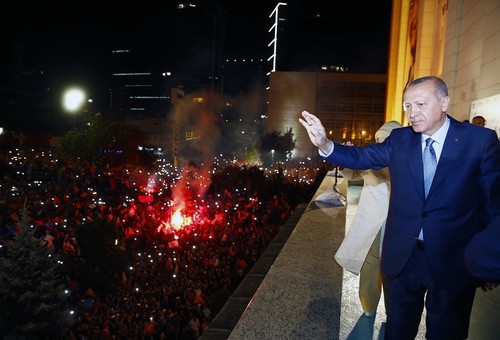 Voter turnout in the presidential race was 84.3 percent, out of more than 53 million voters, and for the parliamentary elections the turnout was 86.22 percent; the two elections which were held on the same day.

"In this term, we will be before our nation and make up for our shortcomings," Erdoğan added. "Starting from tomorrow, we will be in a rush trying to deliver on promises that we have made to our nation."

He also said his government would confront terror groups more decisively. "We will increase our country's international reputation," he added.

"Turkey has decided to take the side of growth, development, investment, enrichment and a reputable, honorable and influential country in all areas in the world," Erdoğan said.

Turkey had approved a shift from the parliamentary system to a presidential one in a referendum on a constitutional amendments package on April 16, 2017. The government in Turkey will now be led by a president, as the prime ministerial post is dismantled.

In addition to the country-wide celebrations, with young and old taking to the streets, Turks abroad also flocked to the streets to celebrate Erdoğan's victory, particularly in European countries.

Expats in many European countries, including Germany, France, Belgium, Austria, Sweden, the United Kingdom and Bosnia and Herzegovina joined their countrymen in Turkey who celebrated the election win with waving the Turkish flags in their cities.

Many in Muslim-majority countries also celebrated Erdoğan's election win, as he is viewed by many as the leader of the oppressed around the world.

Sunday's elections were observed by both domestic and international monitors who said the overall process for the elections was healthy and fair.