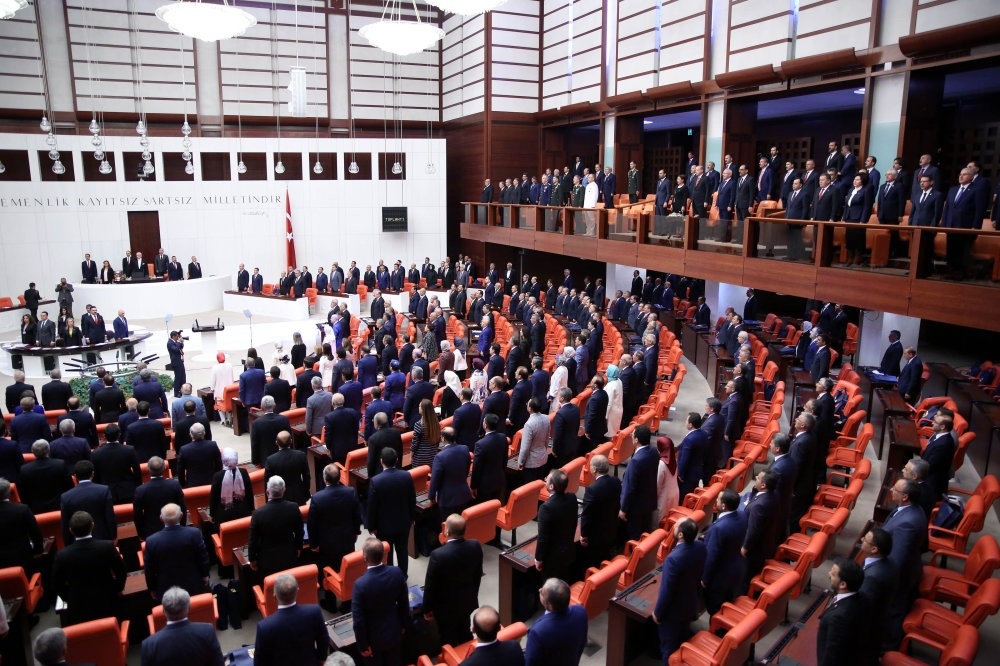 With the new changes in electoral laws, alliances that passed the 10 percent threshold will claim seats in Parliament.
by Özgenur Sevinç Jun 26, 2018 12:00 am

For the first time since 1969, deputies from eight political parties entered Parliament with Sunday's election under the new election law, which signals a more representative era for Turkish politics

The historic presidential and parliamentary elections held on Sunday are expected to usher in a new era for democracy in Turkey as for the first time, after many years, eight different political parties entered Parliament, increasing the need for dialogue and cooperation. "Since the elections held in 1969, for the first time eight political parties have entered Parliament," Mustafa Altunoğlu, an academic from Anadolu University said, stressing the significance of the representation of various political parties in Parliament. Altunoğlu added that the elections held on Sunday indicated that democratic standards in Turkey are substantially promising as there was high voter turnout.

"With the elections, eight political parties have obtained the chance to be in Parliament. This was enabled with the new election law," he said.

Previously, in general elections, a political party was required to garner 10 percent of the votes nationwide for its candidate to win a seat in Parliament. Now, with the new changes in electoral laws, alliances can be formed and those alliances which pass the 10 percent threshold can claim seats in the Parliament.

When the Justice and Development Party (AK Party) first came into power in 2002, only the AK Party and the Republican People's Party (CHP) were able to enter Parliament.

For the June 24 presidential and parliamentary elections the political parties were allowed to form alliances. The People's Alliance was formed by the AK Party and the Nationalist Movement Party (MHP). The parties in the Nation Alliance were the CHP, the Good Party (İP), and the Felicity Party (SP).

Oral Çalışlar, a columnist of Posta newspapers, underlined that the next term can be described as a significant "project for democracy" since a diverse Parliament will have to attempt to reach middle ground on various issues.According to these results, the People's Alliance received 348 parliamentary seats, of which 298 are AK Party deputies. The Nation Alliance, however, got 188 parliamentarian seats. With 144 seats going to the CHP while 65 of the seats are of the İP.

Çalışlar stressed that the president needs the Parliament while passing a law, he does not have to receive a vote of confidence.

He underscored that "for example, if the president is to focus on the relations with the European Union and take some steps in relation to this issue, he might choose to work with a specific party while he works with another one on economic issues."

According to the changes adopted in the April 16, 2017 constitutional reform and presidential system referendum, the number of deputies in the Grand National Assembly of Turkey has increased from 550 to 600.

Cem Duran Uzun, a constitutional lawyer and an academic, highlighted that the criticisms toward the checks and balances in the new system are unfounded.

In the new system, the president will have executive power and the title of "head of state," representing Turkey, the unity of the Turkish people and assuring the implementation of the Constitution and the harmonious execution of state bodies. The president is given the right to issue a presidential decree. The establishment and shutting down of the ministries, their duties and authority as well as organizational structure will be subject to presidential decree. Vice presidents and ministers can be appointed and removed by the president.

Uzun highlighted that "a natural result of the new system is cooperation between political parties." He said that during the run-up to the elections parties aimed to reach over 50 percent of the votes and appeal to all citizens. Uzun stressed that the new system necessitates negotiation and reconciliation to appeal to the public.

In relation to the issue, Altunoğlu added that the discussions for resolutions of significant issues will be enriched as well.