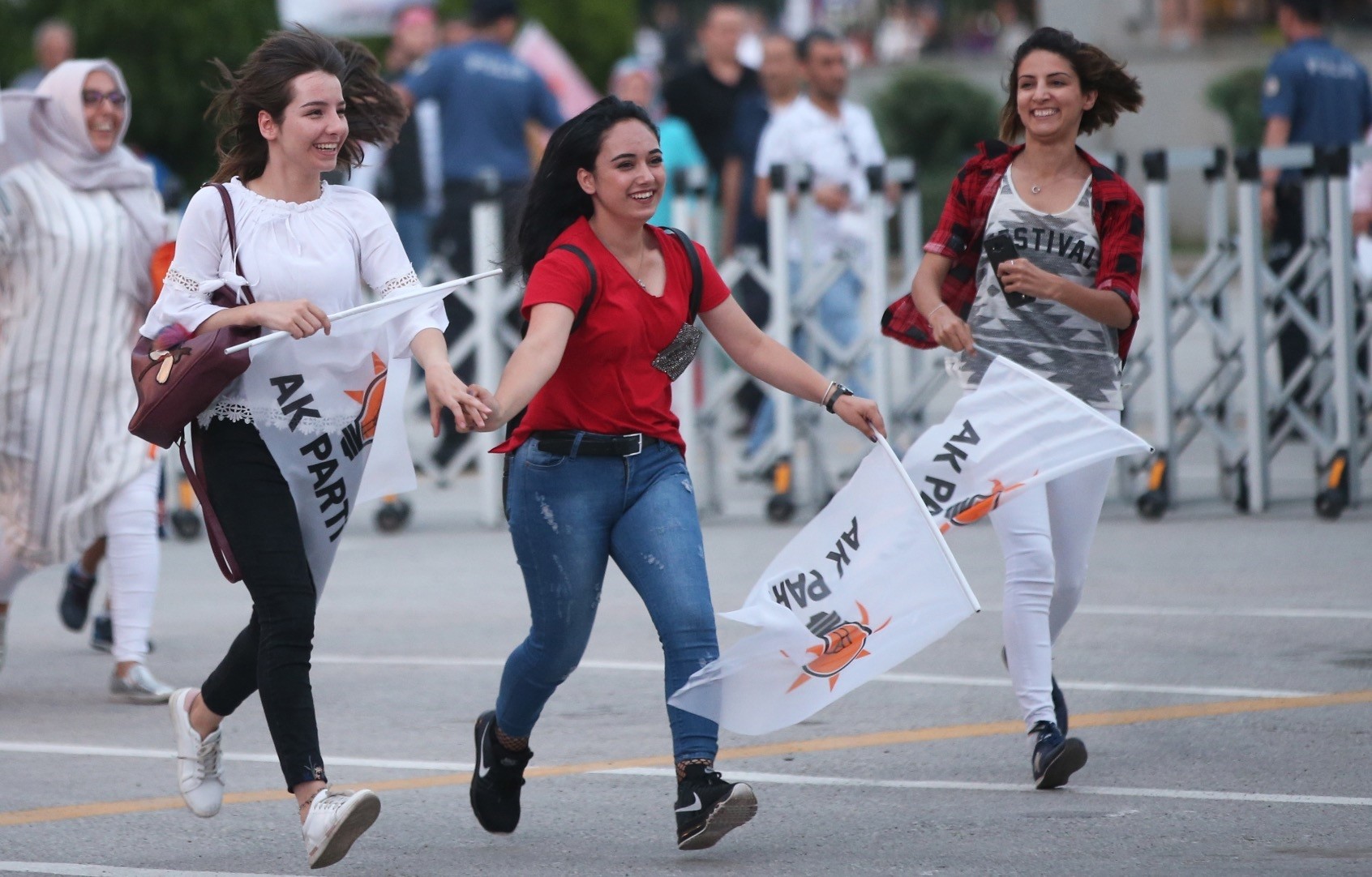 Supporters of President Recep Tayyip Erdou011fan hold Turkish and AK Party flags and greet after closing voting for the Turkish presidential and parliamentary elections in Ankara, 24 June.
by Özgenur Sevinç Jun 27, 2018 12:00 am

Experts said that the reason of nearly 10 percent gap between Erdoğan's votes and AK Party in elections can be related with voters' confidence on new executive system as well as the president itself, while reactive against the ruling party for recent problems

The supporters of the Justice and Development Party (AK Party) strongly endorsed the re-election of the incumbent President Recep Tayyip Erdoğan in the presidential elections, while the AK Party vote saw a decrease in parliamentary elections, when compared to the Nov. 1, 2015 elections. Experts say the electoral base of the party conveyed a message to the party officials, saying that they support Erdoğan's leadership and the new executive government system. They added, however, that the voters also gave a signal to the AK Party that must be considered by the party officials.
​
Erdoğan claimed victory with 52.6 percent, while AK Party vote remained at 42.4 percent, a gap of nearly 10 points between the chairman's total vote and the party's.

Commenting on the gap between the votes of the AK Party and President Erdoğan, Mehmet Şahin, an academic of political science, said that "While strongly supporting Erdoğan and the new executive system, AK Party supporters directly gave a message to the party in the elections."

Şahin said that significant number of voters who previously said 'no' in the April 16 referendum, voted for Erdoğan signaling that the new system has been widely accepted.

In the June 24 presidential and parliamentary elections held on Sunday, AK Party had 42.4 percent of the votes, losing the majority in the parliament, nearly 7 point decrease when compared to Nov. 1, 2015 elections. The Nationalist Movement Party (MHP) received 11.2 percent of the vote, pushing the two party's People's Alliance to 53.7 percent, garnering 344 seats in the Parliament.

In relation to the issue, AK Party spokesman Mahir Ünal said yesterday during a televised interview that "We knew that our president will get more votes than AK Party."

Erdoğan has been a popular and a charismatic figure in Turkish politics since his days as the mayor of Turkey's commercial and cultural capital, Istanbul, in 1990s.

Accustomed to winning every election since 2002, Erdoğan has been seen as the sole leader of the party, since AK Party was formed in 2001.

"There is always 4 to 8 point difference between the (votes of) leader and the party. It was the same as in 2002," Ünal said and added that the potential of the political parties and leaders are different.

Referring to the loss of votes in AK Party comparing to the previous elections, Şahin said that the long time period of ruling by AK Party governments needs to be taken into consideration to explain the discontent among the electoral base over some of the party policies.

He said that "The AK Party supporters trusted Erdoğan in the execution, yet they wanted to make different decisions regarding the legislation."

"In this elections, the voters had also alternatives. The People's Alliance provided an alternative to some AK Party supporters as the MHP's stance following the July 15 coup attempt has been welcomed by many," Şahin said. In his speech in balcony on Sunday after the first results of the election, Erdoğan acknowledged the decrease of AK Party saying that the message has been received. A Foundation for Political, Economic and Social Research (SETA) political analyst, Nebi Miş, also agreed that as Turkey have been governed by AK Party governments for 16 years, it is natural that there might be some reactions from the supporters on specific issues.

"The voters provided great support to Erdoğan and chose him as president. The AK Party voters gave a message to the AK Party as they already knew that the stability will continue with the president Erdoğan in the new system," Miş said.

Miş also said that there may have been a shift of votes from AK Party to the MHP, "While Some AK Party voters wanted to support the MHP, which showed solidarity during significant times, some of them voted for MHP because of their reaction to the AK Party."

Another reason for the decrease in the AK Party's votes is that there was only limited time for AK Party to inform public about the changes made within the party, Miş said, highlighting that the party has undergone a significant rejuvenation process. With the snap election decision, the steps taken by the party were not reflected to the supporters efficiently, he said and added that in the next term these might be highlighted.