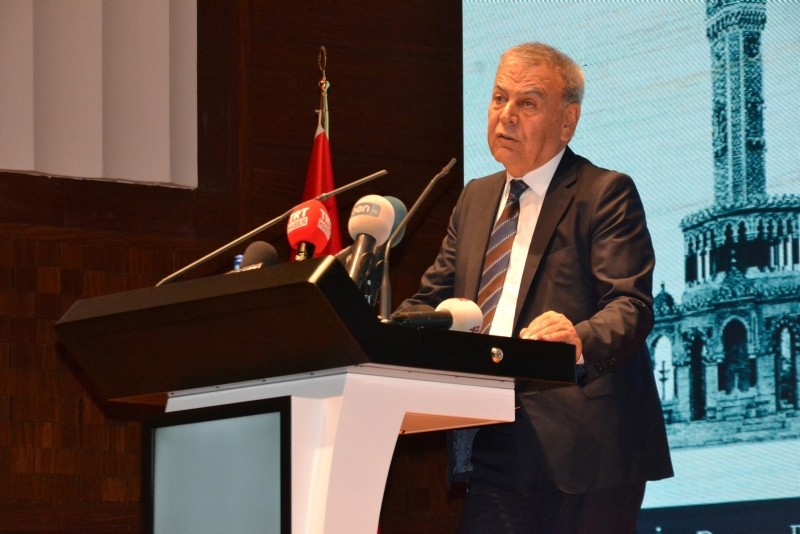 Izmir Metropolitan Mayor Aziz Kocaoğlu announced Monday that he will not run for another term in the local elections scheduled for 2019 while voicing veiled criticism against the administration of the Republican People's Party (CHP) and Chairman Kemal Kılıçdaroğlu amid an ongoing leadership debate since general elections in June.

Kocaoğlu, who led Turkey's third-largest city dubbed as the CHP's stronghold since 2004, said he previously stated that a change at the chairmanship level in the CHP should be made after June 24 elections, which were won by incumbent President Recep Tayyip Erdoğan with 52.6 percent of the votes while CHP candidate Muharrem Ince, a former deputy and chairman candidate, received 30.4 percent. However, Ince's votes were some 8 percentage points higher than the CHP, reigniting the leadership debate between Ince and Kılıçdaroğlu.

"We know that this statement, which led to storms from the party administration, is clear and understandable. I'm standing at the same point, I insist on change. I have the opinion that change should be perceived as an opportunity, not a threat," Kocaoğlu said.

Kocaoğlu said that he thought of not running in the 2014 elections, but then-Transportation Minister Binali Yıldırım's candidacy was effective in his decision to run again. He also said that he wanted to make this announcement six months ahead of the elections, just like his previous announcements, to give the party and possible candidates more time to focus on the upcoming candidacy process.

He said that his 14.5 year-long tenure was the longest of 150 years of Izmir's municipal history, thanking the residents for their favor.

Seyit Torun, the CHP's vice chairman in charge of municipalities, said that Kocaoğlu unilaterally announced his decision to the public. "We are not in a position to tell a mayor that gave his own decision that 'don't go, don't leave.' I respect this decision," Torun said.

CHP Deputy Group Chairman ​Özgür Özel said Kocaoğlu's decision was a surprise for the CHP administration. He added that they respect the mayor's decision and sorry for his departure but the CHP won't lose any votes in Izmir.

The 70-year-old was elected for the post by the metropolitan municipal council in 2004, when Ahmet Piriştina, a respected administrator and politician who had been running the city since 1999, died suddenly of a heart attack. A relatively unknown figure at the time, Kocaoğlu, who was the mayor of Bornova district, garnered a nomination as he was viewed as a balance figure between other mayors and competing districts.

Kocaoğlu had big shoes to fill taking over after a mayor dubbed "legendary," as many of Izmir's decadeslong problems – such as pollution in the Gulf, flooding and water management, transportation and the fate of the city's famed waterfront area – were mainly resolved in Piriştina's term.

In his first term, Kocaoğlu kept a low public profile, focused on completion of ongoing projects and, despite being a mayor from the opposition party, generally maintained cordial relations with consecutive Justice and Development Party (AK Party) governments. The city successfully held the 2005 Universiade Games with the cooperation of local and national authorities, and AK Party's 2004 mayor candidate Taha Aksoy served as coordinator of the event. Izmir's candidacy for Expo 2015, which was lost to Milan, was another example of good cooperation between Izmir and Ankara.

Kocaoğlu's first term was marred with a scandal that erupted in 2008 due to a high level of arsenic in Izmir's drinking water, along with many Turkish cities including capital Ankara. However, the electorate generally perceived the scandal's exposure as a calculated step ahead of 2009 local elections and Kocaoğlu was re-elected with a record 55.2 percent of the votes against AK Party's Aksoy.

Kocaoğlu's second term was also marked with strong relations with Ankara as the city became the first municipality in Turkey to complete its refurbishment of the aging suburban rail system in cooperation with Turkish State Railways (TCDD). The IZBAN commuter rail system is currently the longest in Turkey, serving 40 stations along 136 kilometers of tracks between Selçuk and Aliağa districts, which will reach 185 kilometers when the line is extended to Bergama district. Minister Yıldırım was a key figure in the realization in the project, along with other government investments such as the Izmir Ring Road, Konak Tunnels and Istanbul-Izmir Highway. Yıldırım was Kocaoğlu's opponent in the 2014 local elections, but the incumbent mayor took 49.6 of the votes and was elected for a third term. Yıldırım later rose the post of prime minister in 2016, and currently serves as the speaker of the parliament.

Kocaoğlu's second term was also marked with corruption charges directed against Kocaoğlu and the Izmir Metropolitan Municipality (IBB). Prosecutors, all later associated with the Gülenist Terror Group (FETÖ), demanded nearly 400 years in jail for Kocaoğlu while several municipality bureaucrats were arrested. The mayor and 128 other suspects were acquitted of all charges in February 2017.

During Kocaoğlu's term, Izmir has been consecutively ranked Turkey's best performing municipality in terms of finances by international credit rating agencies. Former industrial and commercial facilities in central Izmir's port and bay area, some of which were idle for decades, also saw rapid development in Kocaoğlu's last two terms. The city, offering a calm and relatively spacious lifestyle with good connections to summer resorts, has started to attract more white-collar workers from Istanbul and other large cities in the last couple of years, making Izmir the most lucrative market for real estate investors. However, this development has not yet been backed with a significant increase in the job market and real sector investments. The municipality invested heavily in rural development and made sustainable development one of its primary targets.

However, Kocaoğlu was also criticized for a number of issues, including denying building permits for high-rises and other commercial buildings, which the mayor defends as protecting Izmir against concrete slabs while his opponents accused him of hindering growth. The pollution levels and bad smell in the Gulf have reached an alarming point this summer, prompting an outcry among locals. Despite the success in IZBAN and revitalizing city ferries, the development of the city's subway system has been slow and was marred with yearslong delays partly due to the municipality's faulty tender process. The recently opened tram projects on two sides of the Gulf were criticized for being too slow and under capacity with serious effects on car traffic. Finally, the mayor was at odds with ultra fan groups of the city's football clubs Göztepe, Karşıyaka and Altay for rejecting or delaying stadium projects.