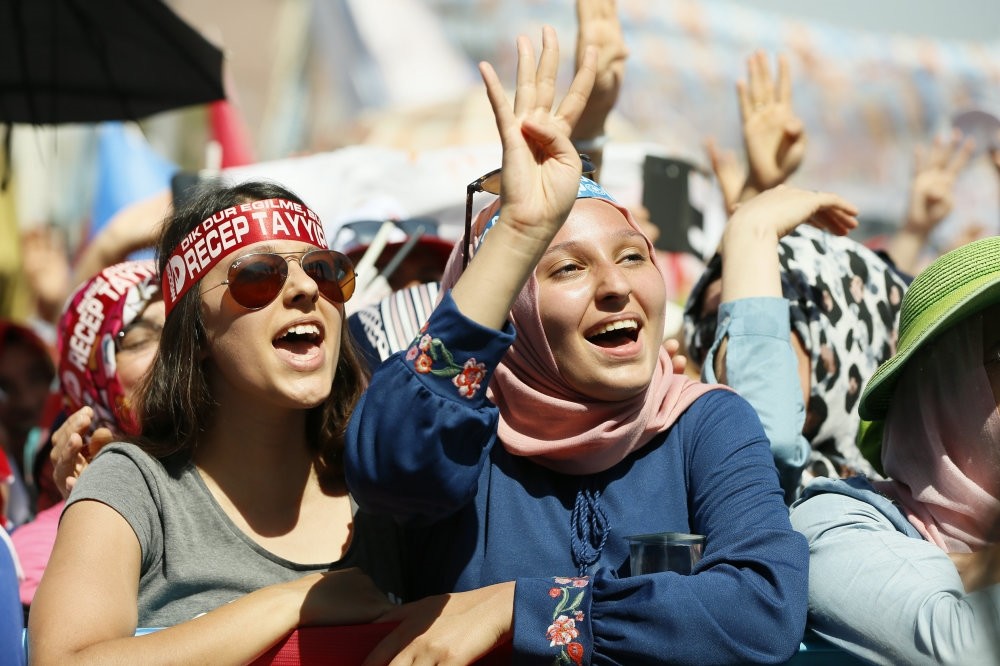 The AK Party, the party with the most female members, is planning to further increase the visibility of women in politics with the upcoming March 2019 municipal elections

The ruling Justice and Development Party (AK Party) has been focusing on increasing the participation of women and young people in politics for the upcoming period ahead of the March 2019 local elections. As local elections near and political parties accelerate their preparations, the AK Party's chairman, President Recep Tayyip Erdoğan, who attaches great importance to the role of young people and women, has been constantly highlighting that women and youth need to be more involved in politics.

In recent high-level party meetings, Erdoğan reportedly underscored that the number of women should be increased in municipal councils, and the number of female provincial mayors should be raised to at least three. Currently, there is only one female mayor, Gaziantep Mayor Fatma Şahin. According to media reports, the party revised possible mayoral candidates in 81 provinces, but no name stood out for the mayoral candidacies of 21 provinces. As a result, the party agreed to conduct surveys for these provinces. Reportedly, women have applied for mayoral candidacy in five of these provinces. The party is also planning to nominate the district and province heads of the AK Party's women's branches to municipal councils in a bid to boost female participation locally.

The mayoral candidacy application process that started on Nov. 5 will end today at 5 p.m. While the majority of the mayors who served for three terms will not be preferably nominated again, about 20 former party deputies applied for mayoral candidacy. During its 16-year governance, the AK Party has been focusing on female participation in politics and strengthening their position in society and exerting effort in line with it.

Thanks to the AK Party's efforts, female participation in politics has increased dramatically. While only 24 women served in Parliament in 2002, that number reached its highest level in the June 24 parliamentary elections with 103 female deputies taking seats.

The highest number of female deputies were elected from the AK Party and approximately 126 of the total 600 AK Party deputy candidates were women, 53 of them winning spots in the 600-seat Parliament. Women made up 19 percent of its deputies this term, up from its previous 11 percent. The AK Party women's branches also have 4.6 million members, higher than any other political party.

In addition to female participation in politics, the party also accomplished numerous achievements to strengthen women's position in society. Among some of the examples, the AK Party added affirmative action in the Turkish Constitution, founded family courts to solve family and woman-related cases, and passed a law to protect the family and stop violence against women. The party also led the foundation of a committee on equal opportunities for women and men in Parliament, which is still quite active.

The AK Party lifted the hijab ban that prevented many women from pursuing a higher level of education or working in public institutions. Accordingly, the percentage of women in higher education reached 96 percent from 75 percent in 2002, and the literacy level among women reached 94.1 percent in 2017 compared to 79.9 percent in 2002.