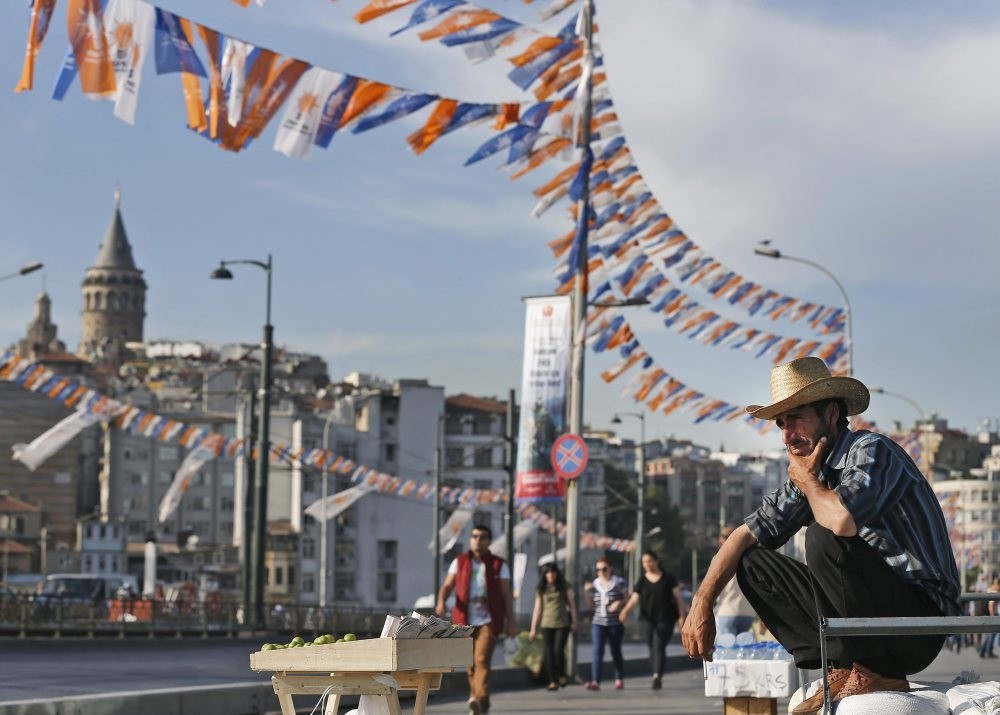 A street vendor in front of the iconic Galata Tower in Istanbul, where party flags and banners are displayed; the province expects to see a heated race for mayor in municipal elections in March next year.
by Daily Sabah Nov 20, 2018 12:00 am

Current Parliament Speaker Binali Yıldırım, who was the last prime minister of the country's parliamentary system, and incumbent Interior Minister Süleyman Soylu have emerged as the most popular names in the tendency surveys conducted among ruling AK Party delegates in Istanbul

The speaker of the Turkish Parliament and the interior minister have emerged as the most popular names for the AK Party's Istanbul mayor candidate, according to an intraparty tendency survey.

Party sources said that Parliament Speaker Binali Yıldırım, who is also a deputy from western İzmir province and incumbent Interior Minister Süleyman Soylu were the two most popular figures among delegates for the mayor's office of the country's commercial and culture capital.

Turkish political parties see success in Istanbul - with its nearly 15 million population - as a success in the country as a whole. The nearly two-decade under AK Party mayors started with former Istanbul Mayor Kadir Topbaş's victory with 45.3 percent of the votes against the main opposition Republican People's Party (CHP) candidate Sefa Sirmen, who came second with 28.9 percent of the votes. Topbaş defeated current CHP Chairman Kemal Kılıçdaroğlu in the 2009 elections with 44.7 percent and got his third consecutive win in 2014 with 47.9 percent against prominent Turkish politician Mustafa Sarıgül, who entered the election as the CHP's nominee. Mevlüt Uysal, the incumbent mayor in Istanbul, was elected by the municipal assembly last year in September, following Topbaş's resignation from the post.

Binali Yıldırım, who was the last prime minister of Turkey's parliamentary system, had run for mayor in the CHP stronghold western İzmir province in the last municipal elections. In the last municipal and mayoral elections in 2014 in Izmir, the AK Party won 35.92 percent of the votes, falling behind the winning CHP, who received 49.58 percent.

Similar to Istanbul, the AK Party has controlled Ankara since its candidate Melih Gökçek triumphed against the renowned social democrat politician Murat Karayalçın in 2004 with 55 percent of the votes against 20.8 percent. The two competed in the 2009 local elections again, and Gökçek clinched another victory with 38.5 percent while Karayalçın remained at 31.3 percent.

In the 2014 local elections, the CHP transferred former mayor of Ankara's Beypazarı district, Mansur Yavaş, from the Nationalist Movement Party (MHP) and nominated him against Gökçek. The experienced mayor left Yavaş behind in a fierce competition by garnering 44.8 percent of votes. The CHP candidate got 43.8 percent of votes. Current Mayor Mustafa Tuna was elected to the post following Gökçek resigning from the post last year.

In Ankara, current Mayor Mustafa Tuna, AK Party Deputy Chairman Mehmet Özhaseki, and Ankara deputies Emrullah İşler and Fatih Şahin were among the names that emerged in the survey.

The candidates are expected to be announced at the beginning next week, following the assessment of public opinion surveys by a commission led by Erdoğan.