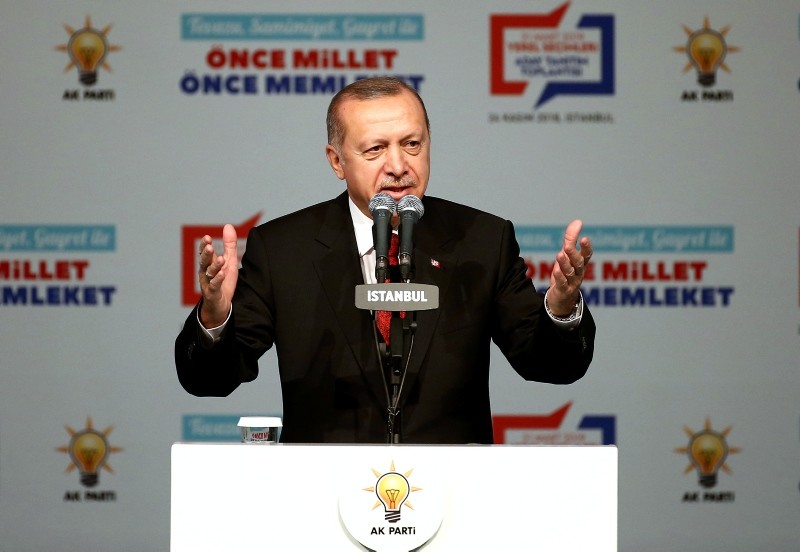 Erdoğan began his words by welcoming the Nationalist Movement Party (MHP) Chairman Devlet Bahçeli's decision to support the AK Party in Turkey's three largest cities of Istanbul, Ankara and Izmir in the elections scheduled for March 31. "I'd like to thank Mr. Bahçeli for expressing his commitment to the People's Alliance once again today; and for his decision to support AK Party in 3 metropolises," Erdoğan told AK Party executives, candidates and supporters gathered for the event at the Haliç Congress Center in Istanbul.

Bahçeli had made the announcement hours before Erdoğan's speech at his party's camp to determine local election candidates and tactics in the southern Antalya province. The president was widely expected to announce the candidates for the country's culture and commercial capital Istanbul, capital Ankara and the western Izmir province, however, the party decided to postpone their announcement after Bahçeli's remarks.

The AK Party and the MHP joined forces in the form of the People's Alliance for the June 24 presidential and parliamentary elections, and the two parties backed the "yes" vote in the April 16, 2017 referendum resulted in the switch to the presidential system.

Erdoğan announced 40 candidates for 14 metropolitan and 26 city municipalities. Some 12 of the 40 candidates are incumbent mayors. Among them, two mayors in southeastern Diyarbakır and Hakkari provinces were appointed trustees to municipalities held by the Democratic Regions Party (DBP), which is the regional affiliate of the PKK-linked Peoples' Democratic Party (HDP). In the aftermath of the July 15, 2016 coup attempt launched by the Gülenist Terror Group (FETÖ) and declaration of the state of emergency, the Ministry of Interior appointed trustees to nearly 100 municipalities, overwhelmingly held by the HDP and DBP, for their role in providing support for PKK terrorists in their urban warfare campaign launched in July 2015.

Five candidates are the current provincial chairmen of the AK Party, in addition to three former provincial chairs. Three candidates were former ministers in AK Party cabinets, whereas three others, including a deputy trade minister, a governor and a general director, will resign from their current bureaucratic posts to run in the elections.

The AK Party won the last local elections in 2014 in 27 out of the 40 cities which saw their candidates revealed Saturday. The remaining provinces were mainly won by the Republican People's Party (CHP) or the HDP/BDP. The MHP, AK Party's partner in the People's Alliance, won in Bartın and Karabük provinces in 2014, where the AK Party also announced candidates for March 31. The AK Party, which was the runner-up in these cities, could gain these two provinces given the right-wing Good Party (IYI Party - IP) was split from the MHP in early 2017. The IP is likely to continue its Nation Alliance with the CHP for some provinces in local elections.

The AK Party did not disclose its candidates in most provinces in inner Aegean, Mediterranean and central Anatolian regions, where the MHP traditionally has a strong voter base achieved successful results in 2014 local elections.

In Amasya, Düzce, Elazığ, Erzurum, Gümüşhane, Kahramanmaraş, Kastamonu, Kayseri, Kırıkkale, Kilis, Nevşehir and Niğde, where the AK Party revealed its candidates on Saturday, the MHP was the runner up in 2014 local elections race and has a significant voter base. However, the AK Party leads with a comfortable margin in these cities when 2018 parliamentary elections are concerned.

Erdoğan said the party will reveal its election manifesto and candidates for the remaining provinces in December.

Some 127,148 AK Party delegates from 81 provinces voted in the online survey to determine their tendency regarding the candidates, which was done for the first time. Around 90.33 percent of all delegates participated in the survey. The highest participation of delegates was witnessed in Istanbul - with 98 percent.

Here are the candidates announced by President Erdoğan on Saturday: