MHP to back AK Party candidates in Istanbul, Ankara and Izmir, Bahçeli says 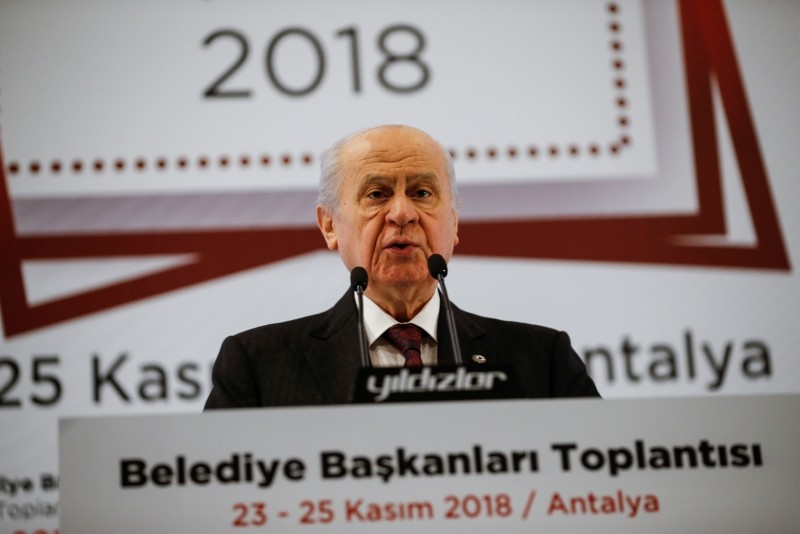 The Nationalist Movement Party (MHP) won't nominate mayor candidates in Turkey's largest cities of Istanbul, Ankara and Izmir, but will instead support candidates of the Justice and Development Party (AK Party) as part of the People's Alliance, Chairman Devlet Bahçeli said Saturday.

Bahçeli's remarks came at a three-day-long party meeting in southern province of Antalya, where the party's administration met with 81 province heads and 130 mayors to exchange views on strategies for local elections slated for March 31.

The statement also coincided with the AK Party's meeting set to be held later in the day in Istanbul, where President Recep Tayyip Erdoğan is expected to reveal the party's candidates for some 40 cities. The candidates for Istanbul, Ankara and Izmir were also expected to be revealed in the meeting, however, several Turkish media outlets reported that the party decided to postpone their announcement.

In his speech, Erdoğan thanked Bahçeli for his decision and his commitment to the People's Alliance.

Erdoğan and Bahçeli met Wednesday to discuss tactics to be used for local elections and the continuation of the People's Alliance, which was formed ahead of the presidential and parliamentary elections on June 24 to push for an election system reform that paved the way for electoral alliances. The two parties cooperated in the April 16, 2017 constitutional reform referendum that enabled a switch to the presidential system, while Erdoğan was the joint candidate of the alliance on June 24.

Bahçeli had previously announced that the MHP would participate in the upcoming local elections in every electoral district with its own candidates and had ruled out an alliance with the AK Party in local elections in a speech before the MHP's parliamentary group on Oct. 23.

Bahçeli said Saturday that it is essential for the People's Alliance to resume without accidents for the new system to continue. "We will give our full support to the candidates of the Justice and Development Party in the three metropolises whoever they might be. There are no bargains, secret deals or exchanges in this will," Bahçeli said, adding that the party will have candidates in every other place.

The nationalist leader's move also came at a time when the main opposition center-left Republican People's Party (CHP) and the right-wing Good Party (IYI Party - IP) have been discussing a possible alliance in the local elections. Rumors also said that the pro-PKK Peoples' Democratic Party (HDP) might support their joint candidates in various cities throughout Turkey, although these parties have not held any official talks. CHP Chairman Kemal Kılıçdaroğlu and IP Chairwoman Meral Akşener met twice in November to discuss ways to cooperate in the elections. The two parties had formed the Nation Alliance before June 24 along with the conservative Felicity Party (SP).

Describing the Nation Aliiance as the "abasement" alliance, Bahçeli said that another important decision of the MHP is to counter possible joint candidates of the CHP, the HDP and the IP wherever they might run, and the party is willing to act in harmony with the People's Alliance in such cases.

The MHP's support is of great importance for the AK Party to comfortably secure election victories in Istanbul and Ankara, where local elections ended in close races between AK Party and CHP candidates in 2014. "No" votes prevailed in the two cities in the 2017 referendum, prompting President Erdoğan to replace their longtime mayors Kadir Topbaş and Melih Gökçek amid AK Party's greater rejuvenation bid in late 2017, which also saw mayors replaced in Bursa, Balıkesir, Ordu, Niğde and Düzce. Erdoğan won with small margins in the presidential race in June 24, signaling another close race on March 31.

Meanwhile in Izmir, where CHP wins local and general elections comfortably by great margins, the cooperation of the AK Party and the MHP might end up in a close race for the mayoral post for the first time in nearly two decades.