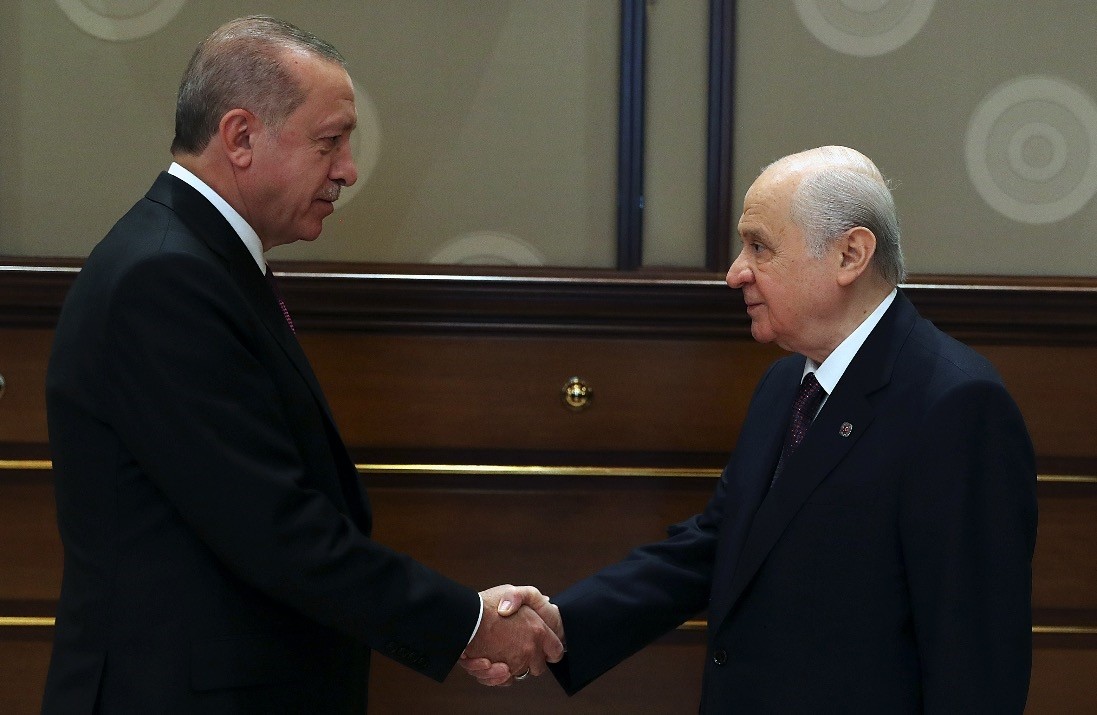 AK Party Chairman and President Recep Tayyip Erdou011fan (L) and MHP leader Devlet Bahu00e7eli (R) have said the spirit of their alliance is for Turkeyu2019s future and that it goes beyond an alliance for winning elections.
by Daily Sabah Nov 26, 2018 12:00 am

The MHP announced that it will support the AK Party's mayoral candidates in Istanbul, Ankara and İzmir for the upcoming municipal elections, which will likely bring a clear win for AK Party candidates in Istanbul and Ankara, and pose a significant challenge to the CHP in the party's western stronghold İzmir province

Nationalist Movement Party (MHP) Chairman Devlet Bahçeli announced over the weekend that his party will support the candidates of the Justice and Development Party (AK Party) in the three biggest provinces of the country in the upcoming municipal elections. Considering the results from the past two municipal elections, the ruling party is expected to likely win again in Istanbul and Ankara, and pose a major threat in the opposition stronghold western İzmir province. The MHP won't nominate mayoral candidates in Turkey's largest cities of Istanbul, Ankara and Izmir, but will instead support AK Party candidates, as part of the People's Alliance.

Chairman Bahçeli stated this on Saturday at a three-day-long party meeting in the southern province of Antalya, where the party's administration met with 81 province heads and 130 mayors to exchange views on strategies for local elections slated for March 31. The ruling AK Party has welcomed the MHP's decision. "I'd like to thank Mr. Bahçeli for expressing his commitment to the People's Alliance once again today; and for his decision to support the AK Party in the three metropolises," AK Party Chairman, President Recep Tayyip Erdoğan told AK Party executives, candidates and supporters in Istanbul on Saturday, where the party also announced mayoral candidates for 40 provinces.

Following MHP's decision, the AK Party seems to have substantially increased its chances of winning the three provinces, when previous local election results are taken into consideration.

In the capital Ankara, which the AK Party has been winning for the past three elections, the party had received 44.80 percent of the vote, while the main opposition Republican People's Party (CHP) received 43.78 percent, and the MHP 7.77 percent in the 2014 municipal elections.

Combining the vote percentages of the AK Party and the MHP, the AK Party can reach a strong support base, above 50 percent of votes, which would mean a clear victory once again.

In the country's culture and commercial capital, Istanbul, the AK Party has also been winning with clear victory. The ruling party had received 47.92 percent of votes in the last elections in 2014, while the CHP garnered 40.08 percent, and the Peoples' Democratic Party (HDP) got 4.83 percent. The MHP's vote percentage was 3.97 percent.

In Istanbul as well, the MHP's support to the AK Party would likely mean a consolidation of center-right and nationalist votes, again increasing the possibility of another victory in the country's most populous province.

Turkey's third most populous province, western İzmir province, has been a CHP stronghold and a challenge for the center-right parties to win. Yet, AK Party's alliance with the MHP may mean a boost in hopes and results for the AK Party candidate in İzmir for the upcoming elections in March.

In the 2009 municipal elections, the vote percentages of the parties in Ankara was as follows; AK Party 38.5 percent, CHP 31.5 percent and MHP 26.9 percent. In Istanbul, the AK Party garnered 44.2 percent, while the CHP got 37 percent, and the MHP garnered 5.1 percent of the votes. In Izmir, CHP won by 55.2 percent as the AK Party received 30.7 and the MHP got 7.2 percent of the votes. Taking the 2009 municipal election results in consideration, the AK Party candidate is again seen as the clear victor in Istanbul and Ankara, while increasing chances in challenging the CHP candidate in the western Izmir province.

The AK Party will announce its candidates for the three provinces tomorrow. The party is expected to nominate strong figures from the party to secure wins. Winning municipal elections in these provinces has been a strong indicator of parties' overall success in the country's political races. In the past parliamentary elections on June 24 and also the AK Party-led referendum on constitutional amendments on April 16, 2017, AK Party's success was below the desired rates. The party has since put strong emphasis on ensuring better results in the three provinces, which would also mean a refreshing electoral support.

The June 24 presidential elections saw the People's Alliance claim victory with 53.7 percent of the votes and Erdoğan with 52.6 percent. On the other hand, the CHP and the Nation Alliance, which was formed between the CHP, the Good Party (İP), the Felicity Party (SP) and the Democrat Party (DP), garnered 33.9 percent votes. The CHP, as one party, only managed 22.6 percent, which is a lower level of support when compared to previous elections.

While the AK Party and MHP have announced that they will cooperate in the local elections, the opposition parties have not made official statements about their possible alliances. As the CHP is having talks with the İP discussing an alliance, it is not clear whether they will nominate a joint candidate or not.

Referring to the recent talks between some political parties, Bahçeli said "the CHP, HDP, and the İP are on the same line. These circles who did not yield results in June 24, are pinning their hopes on March 31," adding "they will not be able to undermine the nature of the new governing system."

"It is our duty to avert the scenarios of those who aim at turning the March 31 local elections into a vote on a system, a debate of governing," Bahçeli said expressing his strong support for the People's Alliance.

The two parties have been stressing that the People's Alliance was not solely formed to support each other in elections, but to present a united approach against any serious threats directed toward the country.

"Our approach toward the election is not based on what we would gain or lose," Bahçeli said on Saturday. Bahçeli added that in other cities where opposition parties might nominate joint candidates, "the MHP would do what the People's Alliance necessitates."