AK Party goes green for election campaign, calls on other parties to follow its lead 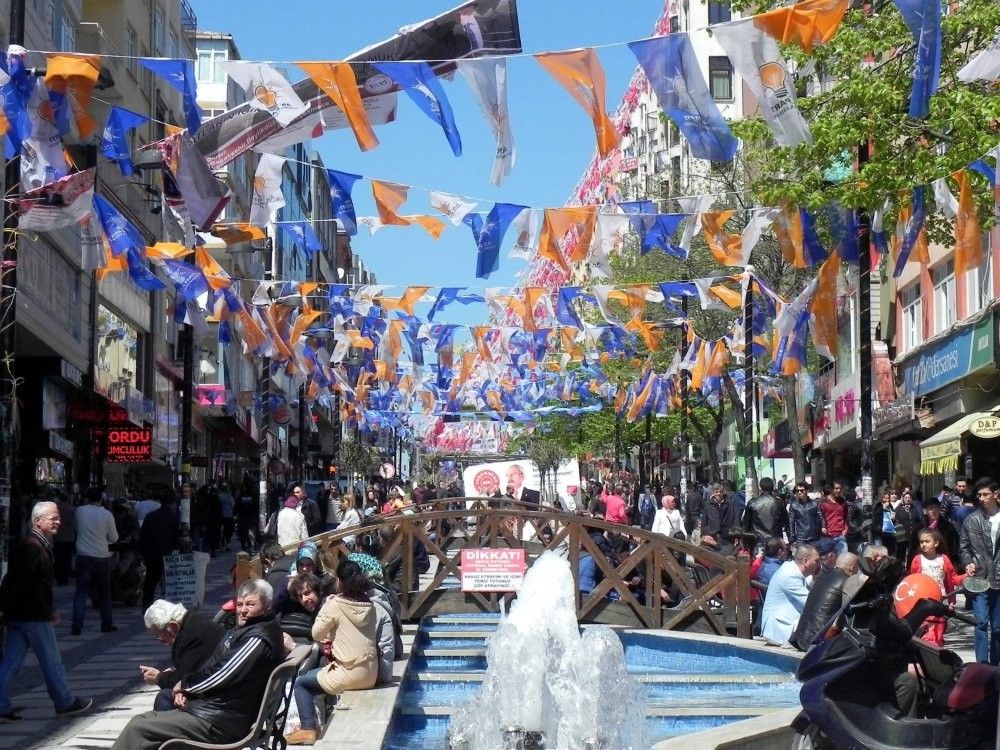 The AK Party will not use traditional methods of campaigning in city centers, such as large banners and party flags, in a bid to reduce visual pollution in the upcoming municipal elections.
by Özgenur Sevinç Dec 07, 2018 12:00 am

The AK Party will follow a greener path in its election campaign for March 2019, while at the same time utilizing social media methods and platforms more than ever

Streets decorated with colorful flags of all the political parties, posters of candidates on walls and posts, minivans driving around with loudspeakers playing campaign songs. This chaotic picture, which was described as visual pollution by many, would be on display during previous election periods in the streets of Turkey. However yesterday the ruling Justice and Development Party (AK Party) announced that for the March 2019 municipal elections these traditional methods will be eliminated and instead be made more environmentally friendly through the utilization of social media channels.

"We are completely leaving campaign methods that cause visual and noise pollution. We have decided to follow a campaign respecting the environment and people," President and Chairman of the AK Party Recep Tayyip Erdoğan said yesterday during the party's extended provincial heads meeting at party headquarters in Ankara. Erdoğan underlined that in order to prevent visual pollution, the party will only be allowed to display flags in the regions of party organizations and election coordination centers. The AK Party election buses will not be touring except on specific times set beforehand. Erdoğan underscored that social media and other mediums will take the place of traditional campaign methods.

As a party known for its green policies, it is not hard to understand why the AK Party opts for holding a more modern and technological election campaign.

In the main squares of the cities, it is possible to see political parties setting up stands next to each other displaying party banners and distributing brochures. The party buses of different parties parked there also loudly play campaign songs that merge with the all the other songs playing.

"There has been increasing disturbance in all parts of society during the election campaigns which often turn into a demonstration of political power. Hanging banners and playing campaign songs from buses belong in the 1990s; responding to the demands of the people AK Party took the initiative as the ruling party to end this," said İsmail Çağlar, the society and media research director at the Foundation for Political, Economic and Social Research (SETA).

Erdoğan also called on other political parties to give up old campaigning tools harming the environment and adopt new methods.

Stressing the increasing use of the internet in Turkey and across the world, Erdoğan said that it is possible to reach out to more people via social media rather than holding meetings in cities.

Erdoğan himself is an active user of social media as he has over 13 million followers on Twitter.

Since it came to power in 2002, the AK Party has been known for its green policies aiming at increasing environmental sensitivity. According to a report by the AK Party that explains the activities and performance of the government in the past decade, between 1992 and 2002, the government oversaw afforestation work in some 743,000-hectare area. This number has increased six-fold between 2003 and 2017. During the last decade of the AK Party-led government, a 4.9 million hectare area was used for forestation. The same report revealed that some 1.5 million hectares of new forests were also created in Turkey.

Previously, the Nationalist Movement Party (MHP) announced that it will not nominate candidates in İstanbul, Ankara, and İzmir and instead support the candidates of the AK Party. Former Environment and Urban Planning Minister Mehmet Özhaseki, who now serves as deputy from central Kayseri province and AK Party vice chairman in charge of local administrations, was nominated for the capital Ankara.

There are seven provinces including İstanbul that the AK Party has yet to announce. The remaining cities are Manisa, Aydın, Muğla, Mersin and Adana. In İstanbul, Parliament Speaker and former Prime Minister Binali Yıldırım is largely expected to be the candidate of the AK Party. Except İstanbul, all other provinces are reportedly being considered for joint candidacy with the MHP as part of their People's Alliance. The MHP won the 2014 local elections in Adana, Mersin, Manisa and Osmaniye provinces.

The names announced so far point to a large-scale renewal by the AK Party on a local scale with the party sticking to its three-term limit. Out of the 74 names announced so far, only 17 are incumbent mayors, and among those names are several mayors who took over during the AK Party's rejuvenation bid in late 2017 and others who replaced outgoing mayors elected to Parliament in the June 2018 presidential and parliamentary elections.

In relation to the People's Alliance formed with the MHP, Erdoğan stressed that the AK Party aims to continue the alliance in harmony.

"No one should attempt to cast a shadow into our People's Alliance," Erdoğan said calling on members of the AK Party to continue efforts without taking steps that would undermine the alliance. He underscored that everyone needs to follow the decisions taken by the parties' headquarters in order to reach harmony.