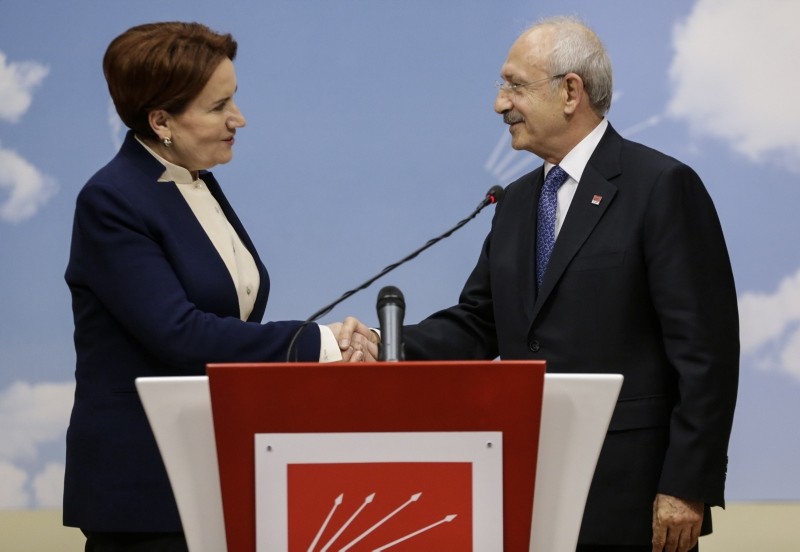 Turkey's main opposition Republican People's Party (CHP) and opposition Good Party (IP) came to an agreement for an alliance for the March 2019 local elections late Wednesday, saying their mayoral candidates for Istanbul, Izmir and Ankara will be from the CHP.

IP Chairwoman Meral Akşener and CHP Chairman Kemal Kılıçdaroğlu met later in the day to discuss their alliance and determine candidates for the upcoming elections after talks between the delegations of the two parties.

Following a 40-minute long meeting, the two party leaders held a joint press conference and announced after that they had reached a "good deal" that would be beneficial for Turkey.

However, the news of the alliance was not welcome in the CHP's Balıkesir provincial organization, which was to support IP's candidate former deputy Ismail Ok for the metropolitan municipality. Provincial Chairman Serkan Sarı held a press conference late Wednesday and said stand behind their candidate, former CHP Balıkesir deputy Ahmet Akın. Sarı said that administration of all 20 district organizations support their stance and they will go to party headquarters in Ankara on Thursday to reverse this decision, signaling that they will resign if the decision remains the same.

The province is among the most contested electoral regions in Turkey, where the AK Party, CHP, IP and the Nationalist Movement Party (MHP) all have significant voter bases. The CHP currently holds district municipalities of the large towns of Bandırma, Edremit, Ayvalık and Erdek.

In central Nevşehir province, the CHP and the conservative Felicity Party (SP) will support the IP's candidate, CHP Nevşehir Province Chairman Kamil Gülmez said Thursday. He added that the CHP will support IP's candidate in Gülşehir district while the IP will support CHP candidates in Kozaklı, Avanos, Derinkuyu and Ürgüp district.

The CHP previously announced its 252 mayoral candidates for some election districts including 10 provincial municipalities.

The two parties have also been signaling that they will continue the Nation Alliance formed with the conservative SP and center-right Democrat Party (DP) in the June 24 parliamentary elections, in order to appeal to the other parties' voter bases in the elections.