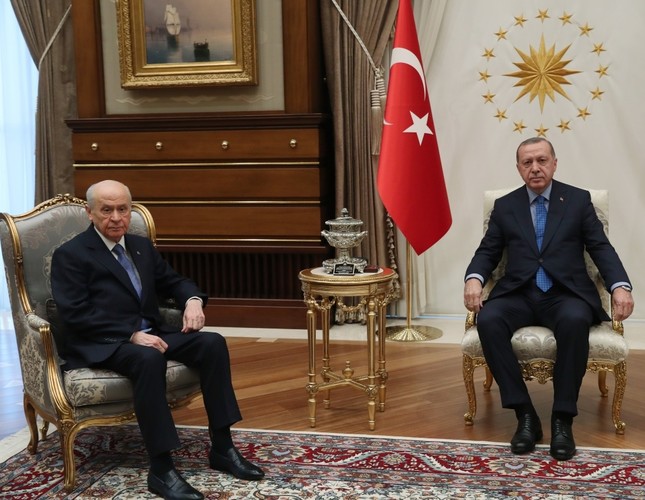 The ruling Justice and Development Party (AK Party) Chairman, President Recep Tayyip Erdoğan, met yesterday with Nationalist Movement Party (MHP) Chairman Devlet Bahçeli, where the two leaders discussed the continuation of the alliance formed for June 24 parliamentary and presidential elections for the upcoming municipal elections on March 31. The meeting, held at the Beştepe Presidential Complex, began at 4 p.m. yesterday and lasted for an hour. According to sources, the two leaders discussed the details of the alliance and assessed the process carried out by AK Party Deputy Chairman Mehmet Özhaseki and MHP Deputy Chairman Sadir Durmaz.

The planned compromises and gestures by the two parties were also reportedly discussed during the Erdoğan-Bahçeli meeting, where the two leaders were seen wearing matching navy ties.

The previous two meetings had lasted about 40 minutes each.

Both parties formed the People's Alliance ahead of the June 24 presidential and parliamentary elections. The MHP supported AK Party's presidential candidate, Erdoğan, who claimed victory with more 52.6 percent of the vote. In Parliament, the two parties' garnered 53.7 percent support, surpassing the 33.9 percent support to the Nation Alliance, formed by the main opposition Republican People's Party (CHP), the far-right Good Party (İP) and the conservative Felicity Party (SP).

Following the decision to continue the People's Alliance, Bahçeli announced that the party will not nominate candidates in Istanbul, Ankara and İzmir with the intention of supporting the candidates of the AK Party.

Since then, Parliament Speaker Binali Yıldırım has been weighed as the most probable figure to run for Istanbul metropolitan mayor in the upcoming local elections.

The AK Party has so far announced candidates in 74 provinces and Yıldırım's candidacy in Istanbul is seen as the most probable option. The remaining 6 provinces will reportedly be left to the MHP as a political gesture.

"The important thing is to work for the welfare of the country. From now on, regardless of our position, we consider serving our country a sacred duty," Yıldırım told journalists accompanying him on his way back from Iran on Sunday. Commenting on the possible candidacy of Yıldırım, Bahçeli said on Tuesday th

Former Environment and Urban Planning Minister Mehmet Özhaseki, who now serves as deputy from central Kayseri province and is the AK Party vice chairman in charge of local administrations, was nominated for the capital Ankara.

Like Özhaseki, Zeybekci was also a businessman involved in the textiles sector and served as the mayor of the Aegean province of Denizli between 2004 and 2011.

Erdoğan and Bahçeli had previously met on Nov. 21 to discuss the future of the alliance.

On Tuesday, Erdoğan also convened his party's Central Executive and Decision Board (MKYK) where he reportedly told fellow lawmakers to be aware of the party's stance on the alliance to avoid possible cracks.