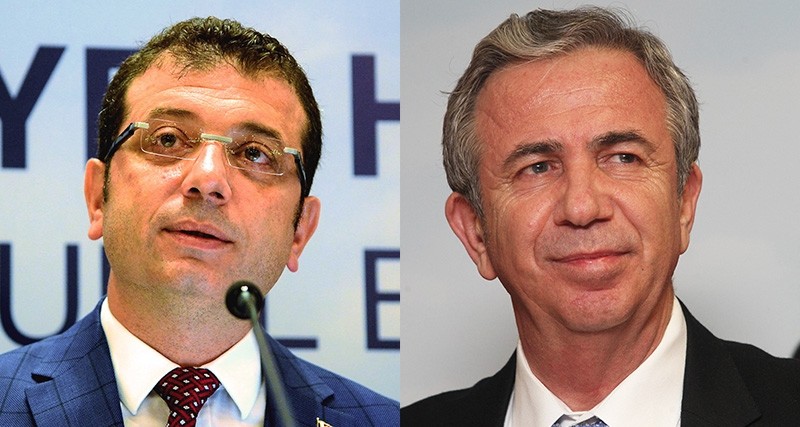 The main opposition Republican People's Party (CHP) announced 400 more candidates Tuesday for the local elections slated for March 31, including for Turkey's cultural and commercial capital Istanbul and the capital Ankara.

The candidates were announced after the party caucus meeting chaired by the party Chairman Kemal Kılıçdaroğlu. The mayor of Istanbul's Beylikdüzü district, Ekrem Imamoğlu, was announced as the party's Istanbul candidate. Imamoğlu was born in Trabzon province in 1970 and graduated from Istanbul University with a degree in business. He became mayor of Beylikdüzü in the local elections in March 2014, gaining 50.83 percent of the votes and winning the district from the ruling Justice and Development Party (ANAP).

Imamoğlu's candidacy had drawn criticism from some party members, who have been claiming that Imamoğlu is not a popular figure among the voter base of Istanbul. However, proponents of Imamoğlu say that he has proven himself in a district municipality and hails from a family with roots from the Black Sea region, which make up most of Istanbul's 15 million inhabitants. Imamoğlu could also appeal to center-right and right-wing voters since comes a from a conservative family, with his father serving among the founders of the center-right Motherland Party (ANAP) in northern province of Trabzon.

In the capital Ankara, where the CHP administration seeks to break the long-running center-right hegemony, Ankara's former Beypazarı District Mayor Mansur Yavaş, was announced as a candidate.

Yavaş was nominated with 45 votes for and 12 votes against in the party organization meeting. Born in 1955 in Beypazarı, Yavaş is a lawyer in profession, graduated from the Law Faculty of Istanbul University. Coming from nationalist roots, he was elected consecutively as district mayor from the Nationalist Movement Party (MHP) in 1999 and 2004.

He was then nominated for Ankara municipality from MHP in 2009, but came third after the province's long-running mayor Melih Gökçek from the Justice and Development Party (AK Party) and renowned social democrat politician Murat Karayalçın from the CHP. He then shifted to the CHP in 2014 and became the party's candidate in the 2014 local elections against Gökçek, again, and lost the election in a neck and neck race by garnering 43.8 of the votes.

"I would like to thank Mr. Kılıçdaroğlu and Ms. Akşener who deemed me suitable for the candidacy in capital Ankara. It is our duty to win the election and [people's] trust and to crown it with success," Yavaş told reporters yesterday after the announcement of his candidacy, referring the head of the CHP Kemal Kılıçdaroğlu and the leader of the Good Party (IP) Meral Akşener.

For some time now, Yavaş's name has been mentioned repeatedly as a possible joint candidate of the CHP and right-wing IP for the Ankara mayor's office, following his remarks that he is "waiting for the two party leaders to compromise."

However, behind the scenes, while Yavaş's candidacy has been backed by Kılıçdaroğlu, the party organization was reportedly uneasy with his name due to his right-wing record. The candidacy of former Ankaragücü football club president, Cengiz Topel Yıldırım, and incumbent mayor of Yenimahalle district, Fethi Yaşar, was also thrown around as an alternative to Yavaş.

The ruling AK Party has controlled Ankara since its candidate Gökçek triumphed against the Karayalçın in 2004 with 55 percent of the votes against 20.8 percent. The two competed in the 2009 local elections again, and Gökçek clinched another victory with 38.5 percent while Karayalçın remained at 31.3 percent.

Along with Ankara, the CHP announced its mayoral candidate for the southern city of Adana, the sixth largest city of Turkey. According to the decision made by the party caucus, Zeydan Karalar, who is already serving as the mayor of the Seyhan district of Adana since 2014, was nominated for the Adana Metropolitan Municipality.

CHP's candidate for the metropolitan municipality of the southern city of Antalya, Turkey's fifth largest city and dubbed as the country tourism capital, was announced as Muhittin Böcek. Böcek uninterruptedly served as the mayor of Konyaaltı district since 1999 local elections, which he ran as the candidate of ANAP, before joining the CHP in 2004.

In Turkey's industrial hub of Kocaeli, CHP's candidate for the metropolitan municipality was announced as Fatma Kaplan Hürriyet, who serves as a deputy from the northwestern Turkish province since 2015.

CHP's candidate for Bolu province municipality was announced as Tanju Özcan, who serves as a deputy from the northwestern Turkish province since 2011.

The CHP previously announced its 464 mayoral candidates for some election districts including provincial municipalities. Specifically, the party will continue its way with the incumbent mayors of Aydın, Eskişehir, Hatay, Muğla and Tekirdağ metropolitan municipalities.

The party is yet to reveal its candidate for the CHP stronghold Izmir and other metropolitan cities due to the long negotiations of alliances with the IP.

The two parties have agreed to continue the Nation Alliance formed with the conservative Felicity Party (SP) and center-right Democrat Party (DP) in the June 24 parliamentary elections, in order to appeal to the other parties' voter bases in the elections.

Therefore, CHP and IP came to an agreement for an alliance for the March 2019 local elections last week, saying their mayoral candidates for Istanbul, Izmir, and Ankara will be from the CHP.

Commenting on the alliance issue, IP Deputy Chairman Ümit Özdağ said Tuesday that the alliance talks on provinces with CHP were completed, and still continues in determining strategy for the districts. "We have cooperated with the CHP in order to bring success. And I hope the success we desire will come," he added.

As part of alliance efforts, Kılıçdaroğlu also met SP Chairman Temel Karamollaoğlu on Nov. 25. Regarding the issue, Karamollaoğlu told the press after the meeting that the SP will enter the elections in every polling district; however, the party will be in close contact with the CHP in certain provinces for possible collaborations.