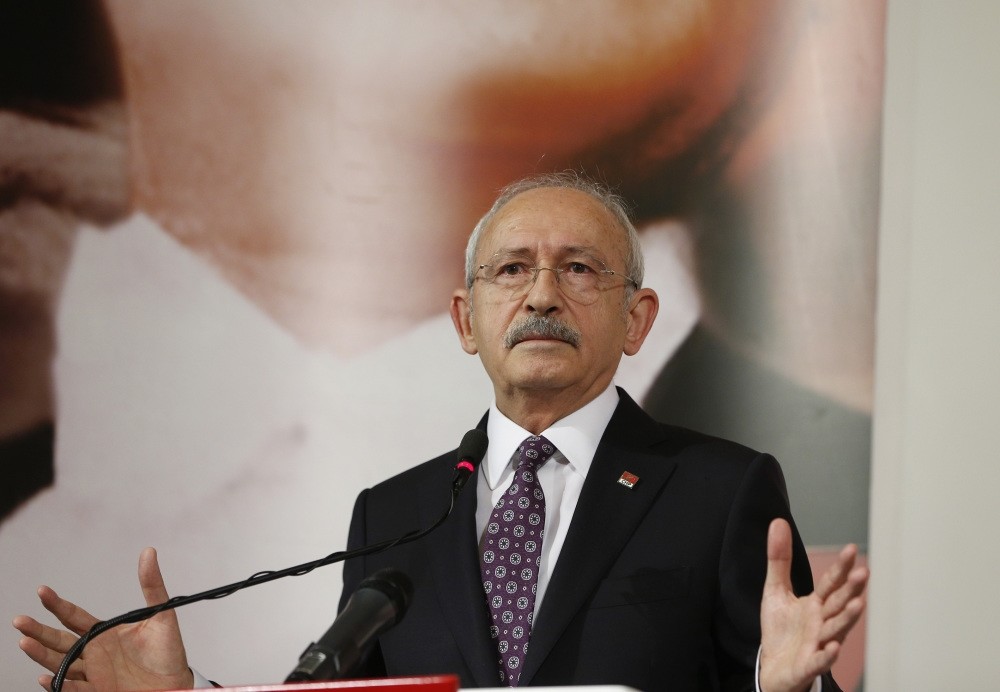 On Tuesday, the CHP revealed its joint mayoral candidates for Istanbul and the capital Ankara.
by daily sabah Dec 21, 2018 12:00 am

The Republican People's Party (CHP) is planning to meet with the "caring section of the society," who are more engaged, instead of organizing traditional meetings in all provinces of Turkey, during its local election campaign.

Answering questions from reporters yesterday, CHP Chairman Kemal Kılıçdaroğlu gave information about the election campaign to be organized by his party, explaining that the party would hold meetings with a certain faction of society, whom he defined as "caring," instead of holding abundant rallies.

Despite the CHP's intention to reach out a particular segment as part of its election campaign, the administration urged party organizations in a workshop in September to embrace a more ordinary or plainspoken discourse to appeal to right-wing and conservative voters.

In order to appeal to other parties' voter bases, the CHP has sought an alliance with the center-right Good Party (İP) and the conservative Felicity Party (SP). However, the decision has also drawn criticism among party organizations, who are blaming the party of alienating its own principles.

As part of this strategy, the CHP is reportedly considering withdrawing its candidates in western Balıkesir and Denizli provinces, where the majority of the voter base consists of a center-right electorate, and back the İP's candidate. However, some local heads asserted that backing the İP candidate in these provinces is not a "logical step."

CHP party organizations argued against the party headquarters' decision to pull its candidates in Balıkesir and Denizli in favor of the İP, saying the party would have more of a chance to win in these provinces compared to İP's candidates. Regarding the decision, Kılıçdaroğlu said he had had difficulty making the decision on these two provinces.

Along with the center-right Democrat Party (DP) and SP, the two parties formed the Nation Alliance ahead of the June 24 presidential and parliamentarian elections this year. Even though the parties suffered a defeat against the People's Alliance formed between the ruling Justice and Development Party (AK Party) and the Nationalist Movement Party (MHP) by garnering only 33.9 percent of the votes, the parties still gave a green light for the continuation of the alliance in the upcoming local elections. Accordingly, on Dec. 12, the CHP and İP recently agreed to continue their political cooperation in some of the metropolitan cities, while the SP will be in close contact with the CHP in certain provinces for a possible collaboration.

In the framework of the alliance, the İP would support the candidates of the CHP in Turkey's three largest provinces, Istanbul, Ankara and Izmir municipalities.

On Tuesday, the CHP revealed joint mayoral candidates for Istanbul and the capital Ankara. The mayor of Istanbul's Beylikdüzü district, Ekrem İmamoğlu, was announced as the party's Istanbul candidate, while former Beypazarı District Mayor Mansur Yavaş was revealed as the bloc's candidate for the capital.

Regarding the issue, Kılıçdaroğlu said the names of İmamoğlu and Yavaş had been on his mind since the party started its intense work for the upcoming local elections. Stressing that he relied on İmamoğlu, Kılıçdaroğlu underscored that they will start to work in December to promote İmamoğlu, who was previously criticized for being an unknown figure among Istanbul's voters. Yavaş said in an interview yesterday with the Yeniçağ daily regarding his candidacy that, "We have made a lot of mistakes that I cannot explain to the public now, but we kept records of those mistakes. We are working to eliminate them."