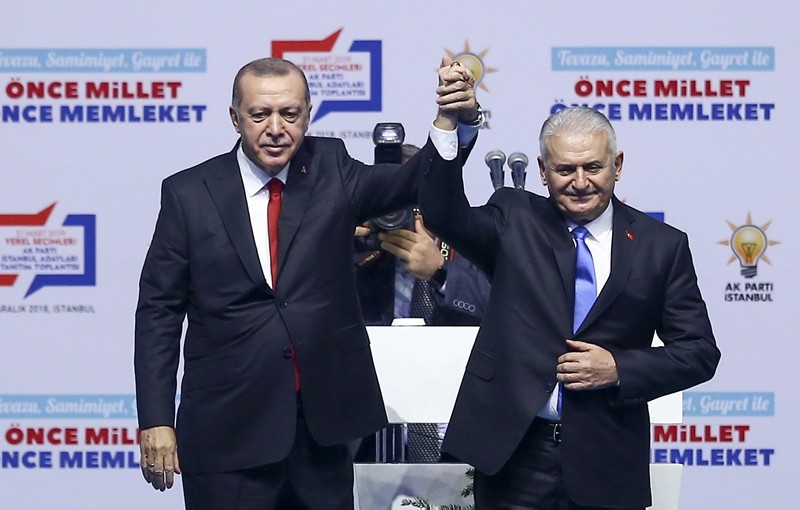 The ruling Justice and Development Party (AK Party) presented on Saturday its candidates for metropolitan and district municipalities in Istanbul, Turkey's most populous city, in the March 2019 local elections and announced Binali Yıldırım, the last prime minister of the country and the current parliamentary speaker, as the person to maintain the party's long-lasting rule in the province.

Announced by President Recep Tayyip Erdoğan, who stressed that his party picked a party heavyweight for Istanbul to show the importance of the title, Yıldırım said, "I owe more service to this city. We will work hard, and we will succeed together."

Yıldırım has long been regarded as the most prominent name for Istanbul, a city where the party that wins the elections is considered as having won Turkey, as he was able to gather public support and appreciation. His opponent in the mayoral race is the candidate of the main opposition Republican People's Party (CHP) supported by the right-wing Good Party's (IP) Ekrem İmamoğlu, who has been the mayor of Istanbul's Beylikdüzü district since 2014. İmamoğlu, on the other hand, considered an unpopular figure by the CHP party organization unlike the former presidential candidate, Muharrem İnce, a dissident figure sidelined by the party administration for some time now despite voicing his intention to become a candidate.

In relation to the CHP, Erdoğan said: "The biggest political threat for Istanbul is the CHP. Istanbul has suffered the most when the CHP mentality haunted the city. No citizens, other than those who voted for this party for ideological reasons, have believed that the CHP would serve Istanbul." He noted that the CHP does not care about Istanbul or the country, but all they care about is the power struggle within their party.

Erdoğan also underscored that "Istanbul is now at a crossroads" and added that the AK Party has transformed Istanbul, which was suffering when they took over, into a modern and historical city.

The AK Party has controlled Turkey's commercial capital Istanbul and administrative capital Ankara since the 2004 local elections, the first municipal poll after its foundation in 2002. The nearly two-decade hegemony of the AK Party started with former Istanbul Mayor Kadir Topbaş's victory with 45.3 percent of the votes against CHP candidate Sefa Sirmen, who came second with 28.9 percent of the votes. Topbaş defeated current CHP Chairman Kemal Kılıçdaroğlu in the 2009 elections with 44.7 percent and got his third consecutive win in 2014 with 47.9 percent against prominent Turkish politician Mustafa Sarıgül, who entered the election as the CHP's nominee.

Before the beginning of the AK Party period in Istanbul, Turkey's commercial and cultural capital had been ruled by the conservative Welfare Party (RP) and later for 10 years by the Virtue Party (FP), which was the continuation of the RP after it was shut down. Erdoğan, then a member of the RP, became Istanbul mayor in the 1994 local elections after the tenure of Nurettin Sözen from the center-left Social Democratic People's Party (SHP). Sözen's term is notoriously remembered by many inhabitants of Istanbul due to water shortages and problems in garbage collection.

Yıldırım, who played an important role in the foundation of the AK Party, first won a seat in Parliament as a deputy for Istanbul in the fall 2002 elections and served the country as the transport, maritime affairs and communications minister in the 58th, 59th, 60th, 61st and 64th governments. He became Turkey's last prime minister in May 2016. With the constitutional changes approved in the April 16, 2017 referendum, which envisaged a new executive presidential system, it was decided that the prime ministerial post would be abolished. He was also entitled to the State Medal of Honor on July 13, 2018, for his outstanding achievements for ensuring the indivisible integrity of the country and the peace and unity of society.

Here is a list of AK Party's candidates for district municipalities in Istanbul:

In three Istanbul districts, Erdoğan said the AK Party would support the Nationalist Movement Party (MHP)'s candidates as part of their People's Alliance.

Changes in candidates made in line with the party's cause

Erdoğan also underlined that the party preferred to make some changes in candidates for certain districts and that they are decisions taken in accordance with the "cause" of the party.

"The AK Party is not a conventional political party; it is a party with a cause. We do what is necessary for the cause that we believe in," Erdoğan said.

Accordingly, Murat Aydın, who has been serving as the mayor of the Zeytinburnu district for three terms, was nominated for Beykoz district municipality, while Mevlüt Uysal, the former mayor of Istanbul's Başakşehir district and now the incumbent metropolitan mayor, was presented for candidacy in the Büyükçekmece district municipality.

During its 16-year governance, the AK Party has been focusing on female participation in politics and strengthening their position in society and exerting efforts in line with this. Thanks to the AK Party's efforts, female participation in politics has increased dramatically. While only 24 women served in Parliament in 2002, that number reached its highest level in the June 24 parliamentary elections with 103 female deputies taking seats. Now the party is focusing on increasing its women mayors.

Erdoğan also underlined that solidarity between the Nationalist Movement Party (MHP) and the AK Party as a part of the People's Alliance has been successful and he believes that it will be successful in the future as well.

"I would like to thank [MHP incumbent chairman Devlet Bahçeli] on behalf of myself, my party and my people," Erdoğan said, adding that that the AK Party would support the MHP's candidates in three Istanbul districts, as part of their People's Alliance.

Bahçeli previously announced that the MHP won't nominate mayor candidates in 27 metropolitan municipalities, including Turkey's largest cities of Istanbul, Ankara, and Izmir, but will instead support candidates of the AK Party. In a bid to further strengthen the alliance, the MHP also decided earlier this month to withdraw nominations of its mayoral candidates in Aydın, Denizli and Erzurum municipalities.