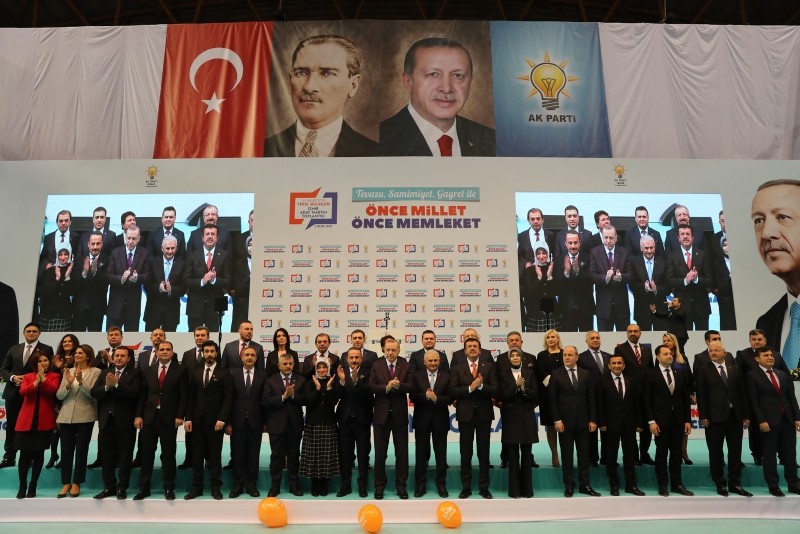 The party previously announced on Nov. 27 that former Economy Minister and Denizli deputy Nihat Zeybekci is the candidate for the metropolitan municipality of Izmir, which is a stronghold of the main opposition Republican People's Party (CHP).

In his speech, Erdoğan criticized the CHP-led municipality and asked the voters in Izmir to make a pragmatic choice rather than ideological.

Speaking about Turkey's economy, the president said that the country's economy grew 4.5 percent in first 3 quarters of 2018, despite challenges.

He added that Turkey hit top figures in the country's history with an export worth $168.1 billion.

Zeybekci, a previous businessman in the textile sector who served as the mayor of the Aegean province of Denizli between 2004 and 2011, held the ministry post from December 2013 to November 2015 and from May 2016 to July 2018.

A center-left hegemony has reigned in Izmir since the late 1990s, unlike Ankara and Istanbul. The former mayor of the province, Ahmet Priştina, who was elected from the center-left Democratic Left Party (DSP), had shifted to the CHP in 2003. He died just a year after his victory in the 2004 local elections. After Priştina, Aziz Kocaoğlu, a businessman and then-mayor of Izmir's Bornova district, became mayor and has ruled the province since.

While the opposition's strategy is not clear in Izmir, the CHP and the IP are likely to cooperate for the local election, and the HDP's voter base is expected to support the leading opposition candidate.

AK Party has nominated Mehmet Özhaseki, its deputy chairman and a former environment and urbanization minister, for mayor of capital Ankara in the upcoming election. Meanwhile Yıldırım, current parliament speaker, will run for mayor in Istanbul.

Along with metropolitan, provincial and district mayors, voters will also elect municipal council members in cities and, in rural areas, muhtars and members of elder councils.

The last local elections were held on March 30, 2014, which saw AK Party clinch more than 45.5 percent of the vote.