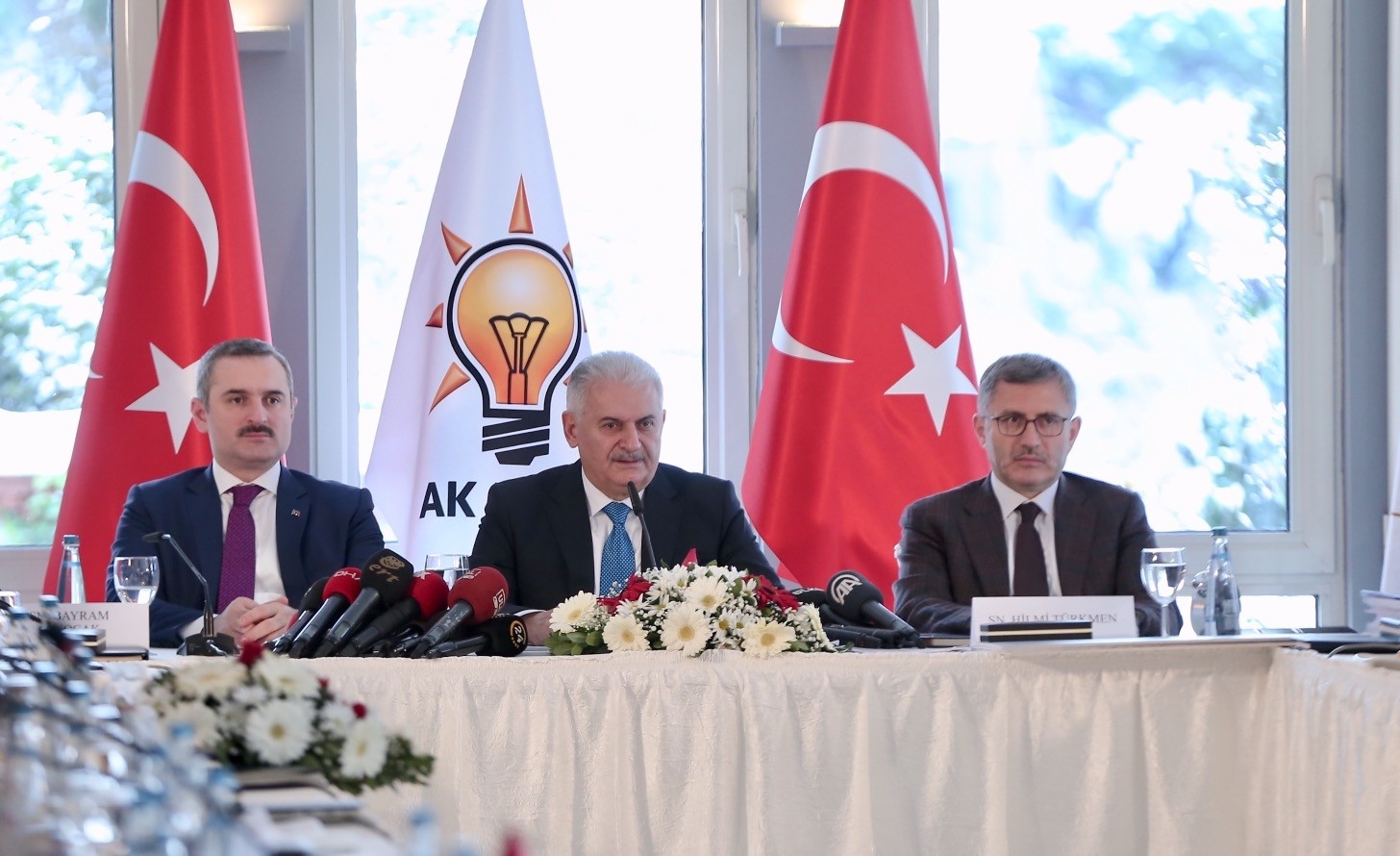 Solving the traffic problem in Istanbul will be at the center of Yıldırım's election campaign, which he has named ‘Istanbul 4.0.' The AK Party's candidate is looking to solve the issue that has affected millions of people suffering from crowded roadways

Parliament Speaker Binali Yıldırım, who is the Justice and Development Party's (AK Party) Istanbul mayoral candidate for the March 31 local elections, revealed Monday that if he is elected he will mainly focus on resolving the traffic issue in Istanbul – one of the most pressing problems in Turkey's commercial capital.

Speaking at a press conference in Istanbul, Yıldırım emphasized that the most persistent problem in Istanbul is the massive volume of traffic in the city. He added that there are currently 770,000 parking lots in Istanbul, but in fact the city needs at least 1.75 million as 40 percent of the city's roads are being used for parking, worsening the traffic problem.

Istanbul, Turkey's most populated city with more than 15 million inhabitants is notorious for its massive volume of traffic. It has also the largest number of motor vehicles compared to other cities in Turkey, at more than 4.1 million.

"We'll bring it to a bearable level. The traffic will not stop, it will flow," Yıldrım said, stressing that they have already met their objectives drafted in 2006 meetings and mobility was raised to 31 million from 14 million.

He added that he aims to decrease waiting time at traffic build-up queues from 45 minutes to less than 30 minutes.

Thanks to a set of preventative measures and a recent project by Istanbul municipality, the city has seen a 17 percent drop in traffic jams. The latest figures released by the Municipality along with companies analyzing traffic data have indicated a 17 percent drop in traffic congestion in Turkey's most populated city, which often scores high in traffic congestion levels. Data collected by TomTom, a leading company for electronic navigation and mapping products also showed congestion levels dropped to 49 percent in 2016 from 62 percent in 2013. The drop is linked to a series of measures like smart transportation systems, new roads, new intersections, and what the government dubbed "megaprojects" in road infrastructure despite the growing population and rising number of motor vehicles in the city.

The Eurasia Tunnel and Yavuz Sultan Selim Bridge were among the major projects helping relieve congestion. Both were opened in 2016 and helped bring down travel times on two major routes, the D-100 and TEM highways straddling the city's European and Asian sides divided by the Bosporus. The Eurasia Tunnel links Kazlıçeşme on the European side with Göztepe on the Asian side and is the city's only underwater tunnel for cars. The two-story tunnel reduces travel time in rush hours from 100 minutes to only 15 minutes. On the other hand, Yavuz Sultan Selim Bridge is the third bridge over the Bosporus. It has relieved Istanbul's traffic from the impact of trucks and other heavy vehicles as authorities have redirected truck traffic to the eight-lane bridge north of the city.

Yıldırım said that the city currently has 170 kilometers of railway network, which is aimed to be increased to over 450 kilometers in five years with 13 new projects. After completion of the planned constructions, the share of railway network in the city's transportation will be improved to 45 percent.

"We left behind the Istanbul 1.0 version of problems," Yıldırım said, adding "It is time for the Istanbul 4.0 version of a new service era." He called the upcoming era the 4.0 version of an understanding of mayorship in Istanbul that was initially launched by President Recep Tayyip Erdoğan when he was the mayor of the city during the 1990s.

Indicating that the needs of the city have turned out to be more sophisticated and in line with the necessities of time, Yıldırım highlighted that in the March 31 elections, he is aiming to open a new 25-year chapter for the city, which has been ruled by the AK Party for nearly two decades.

The AK Party has controlled Turkey's commercial capital Istanbul and administrative capital Ankara since the 2004 local elections, the first municipal poll after its foundation in 2002. The nearly two-decade hegemony of the AK Party started with former Istanbul mayor Kadir Topbaş's victory with 45.3 percent of votes against CHP's candidate Sefa Sirmen, who came second with 28.9 percent of the votes. Topbaş defeated current CHP chairman Kemal Kılıçdaroğlu in the 2009 elections with 44.7 percent and got his third consecutive win in 2014 with 47.9 percent against prominent Turkish politician Mustafa Sarıgül, who entered the election as the CHP's nominee.

Before the beginning of the AK Party period in Istanbul, Turkey's commercial and cultural capital had been ruled by the conservative Welfare Party (RP) and later for 10 years by the Virtue Party (FP), which was the continuation of the RP after it was shut down. Erdoğan, then a member of the RP, became Istanbul mayor in the 1994 local elections after the tenure of Nurettin Sözen from the center-left Social Democratic People's Party (SHP). Sözen's term is notoriously remembered by many inhabitants of Istanbul due to water shortages and problems in garbage collection.

Projects to be shaped in line with inhabitants' demands

Underscoring that projects for Istanbul will be carved out according to the demands of inhabitants, Yıldırım said that during the 84 days ahead of the upcoming elections, he and his team will reach out to locals using several communications tools and explain their projects for each citizen.

Pointing out that they will mainly tailor their projects for the city in line with demands of people of Istanbul, Yıldım indicated that "In principle, we will talk less, we will listen more."

The AK Party has long put emphasis on the wants and demands of Istanbul inhabitants. "White Board," founded in 1994 by the Istanbul Metropolitan Municipality, has increased its activities and effectiveness under AK Party rule. White Board is a municipal unit that Istanbul inhabitants can submit complaints, requests, and opinions to. It serves around the clock to provide solutions and to make the services more efficient by evaluating all the opinions and demands received. Some 3 million inhabitants per year and 8,000 people per day reach White Boards via its internet site and 153 call center.

Yıldırım who played an important role in the foundation of the AK Party, first won a seat in Parliament as a deputy for Istanbul in the fall 2002 elections and served the country as the transport, maritime affairs and communications minister in the 58th, 59th, 60th, 61st, and 64th governments. He became Turkey's last prime minister in May 2016. Yıldırım has been long regarded as the most prominent name for Istanbul, a city where whichever party wins the elections is considered as having won Turkey, as he was able to gather public support and appreciation. His opponent in the mayoral race is Ekrem İmamoğlu, the candidate of the main opposition Republican People's Party (CHP) supported by the right-wing Good Party's (İP), who has been the mayor of Istanbul's Beylikdüzü district since 2014.

In his speech, Yıldırım also said that he congratulated İmamoğlu on his candidacy during a phone call. He underlined that he wants Istanbul to win regardless of the results of the local elections.

"I would be very saddened if Istanbul's problems were to go down the drain. In this respect, I will continue to stay in the field throughout the campaign and I will not waste my time for issues outside [the election campaign] unless I have to," Yıldırım said.

Commenting on the discussions revolving around his position as Parliament speaker, Yıldırım reiterated that he will not resign from his post until he is elected Istanbul mayor, adding that he can continue serving his post according to the current law.