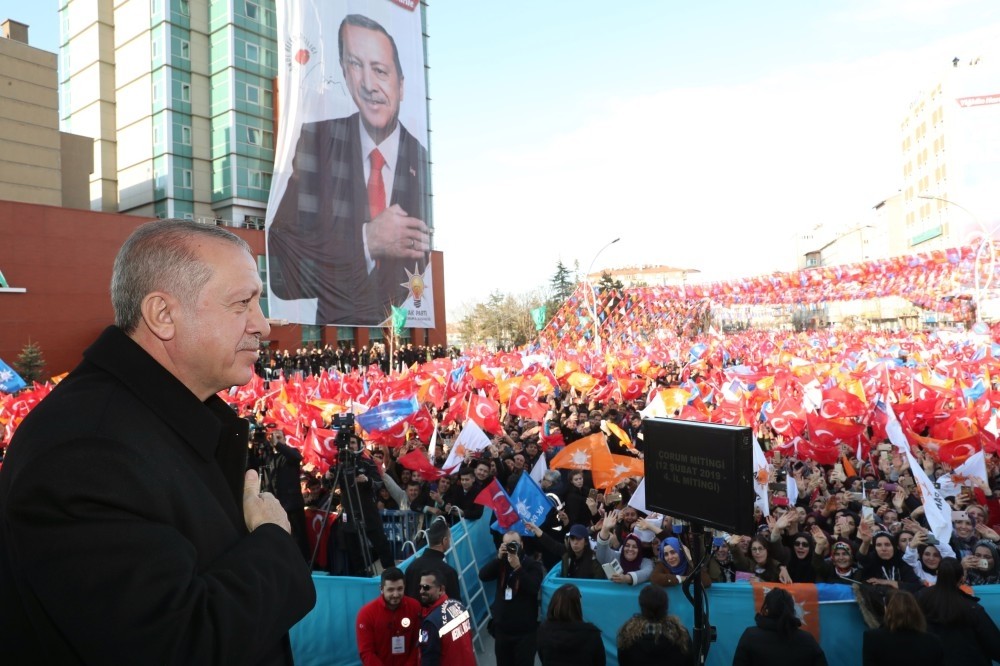 The ruling Justice and Development Party (AK Party) chairman, President Recep Tayyip Erdoğan said Tuesday that the party's main concern was to serve people more. Continuing his rallies ahead of the local elections in northern Turkey's Kastamonu, Erdoğan said that the AK Party has always acted alongside the people, improving democracy in the country. "Turkey always has to move forward," Erdoğan said. Focusing on the AK Party government's achievements in Kastamonu, Erdoğan said that they have invested TL 15 billion in the province in 16 years.

He said that they have introduced 971 new classrooms, 3,556 houses and 25 health centers.

Erdoğan also mentioned the municipal direct sales points for fruits and vegetables, which have been launched recently to eliminate intermediaries between producers and customers. He said that the ones who are trying to destabilize Turkey are not targeting food prices. He added, however, that thanks to these sales points, the prices would be reduced by half.

The initiative began after Erdoğan and other members of the Cabinet vowed to slash the surge in food prices, the main reason behind Turkey's rampant inflation rate that stood at 20.3 percent in 2018. It was partly blamed on profiteers.

Earlier Sunday, Erdoğan said the rise in food prices has turned into a tool of exploitation against citizens, promising to stop those who "terrorize" the wholesale markets.

Following Kastamonu, Erdoğan traveled to northern Çorum province for another rally. In Çorum, he pointed at Çorum's potential for tourism, referring to the historical sites in the province, particularly Hattusa and Alaca Höyük which are some of the oldest settlements of Anatolia. He said that these places should be promoted more.

He also said so far the AK Party government had invested TL 15.5 billion in Çorum, some of these investments include 1,520 new classrooms and a new stadium with a 20,000 person capacity.

Erdoğan also announced that the province will have a high-speed train soon that will connect the coastal Samsun province to central Kırıkkale province through Çorum.

Erdoğan spoke of the new policy to stop plastic bag usage and move toward bags made from cannabis, pointing out in this regard Çorum was the pilot area for cannabis production.

Erdoğan announced in January that Turkey would exponentially increase the production of industrial hemp. He also announced that for the March 31 election campaign, the party would use string bags made from natural materials instead of plastic ones.

An era ended in Turkey on Jan. 1 when the government banned free plastic bags in stores.

Talking about the benefits of using bags made of natural materials, Erdoğan pointed to the fact that they can be reused as long as they are cleaned properly, preventing waste at a remarkable level. "These [natural materials] are the friends of our soil," the president emphasized.

Saying that hemp was the main material of natural bags, Erdoğan said that due to previous incorrect agricultural policies in the country, hemp was no longer produced in Turkey and had to be imported from abroad. "However, hopefully now, our Agricultural Ministry can initiate new work on this matter and we will take the necessary steps to produce it," Erdoğan said.