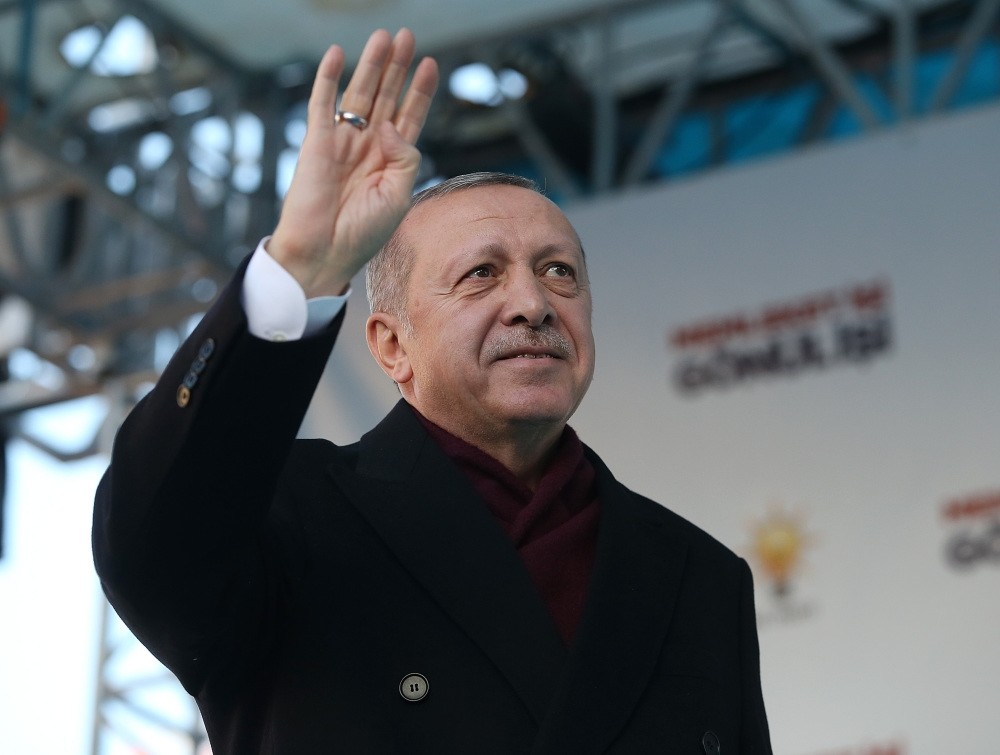 People's Alliance promises to carry Turkey forward in economy, employment, security while winning hearts of people by serving them

President Recep Tayyip Erdoğan said yesterday that the People's Alliance formed between the Justice and Development Party (AK Party) and the Nationalist Movement Party (MHP) aims to serve the people with new projects in municipalities, calling on the two parties' voter base to consolidate their power.

"Our agenda is to carry our country forward in economy, employment, security; winning the hearts of our people by serving them," he said at a local election meeting at Ankara's Altındağ district.

The People's Alliance between the MHP and the AK Party was formed ahead of the June 24 parliamentary and presidential elections. The alliance received a majority in Parliament, while their presidential candidate, Erdoğan, also won the election by 52.6 percent of the vote.

Since both parties consider the results of the June 24 elections as successful, they now seek to continue their alliance in the local elections.

Erdoğan also criticized the opposition Republican People's Party (CHP) for its veiled alliance with the pro-PKK Peoples' Democratic Party (HDP). "The instruction came from Qandil [the PKK's headquarters] for an alliance in the eastern and southeastern [regions]. Their aim is to defeat the AK Party in the ballots," he said.

The HDP had announced that it would not nominate mayoral candidates in seven major municipalities, including Istanbul, İzmir and Ankara, in the upcoming municipal elections. The decision raised questions about a possible secret alliance between the CHP and the HDP, although both parties reject such claims.

Özhaseki had stressed that in the planned project, children will be able to participate in 100 different activities including science centers and small car roads within the proposed 1 million meters square village.

Mine Yılmaz, another resident who attended the meeting, expressed her wish for the implementation of Özhaseki's metro project, which will connect Ankara's city center with the airport. "I live a neighborhood near the airport. The project would help us in transportation," she said.

Özhaseki plans to build a metro line between the city center and Ankara's Esenboğa airport, which is seen as a necessity by many residents of Ankara.

Speaking about the recently launched direct sale points, Erdoğan said that if the prices of fruits and vegetables are not lowered to normal levels by March 31, the direct sale points will continue to serve people.

Food prices in Turkey recently spiked due to a major decrease in supply emanating from seasonal conditions, increasing costs and price speculation by wholesale distributors.

In order to counter price disruptions, the Turkish government, with the help of local municipalities, launched direct sale points in Ankara and Istanbul. The shops, serving in 51 venues in Istanbul and 15 locations in Ankara, offer the most-consumed vegetables, such as tomatoes, onions, potatoes and eggplant, at affordable prices.