Erdoğan: CHP sides with those who want to divide Turkey 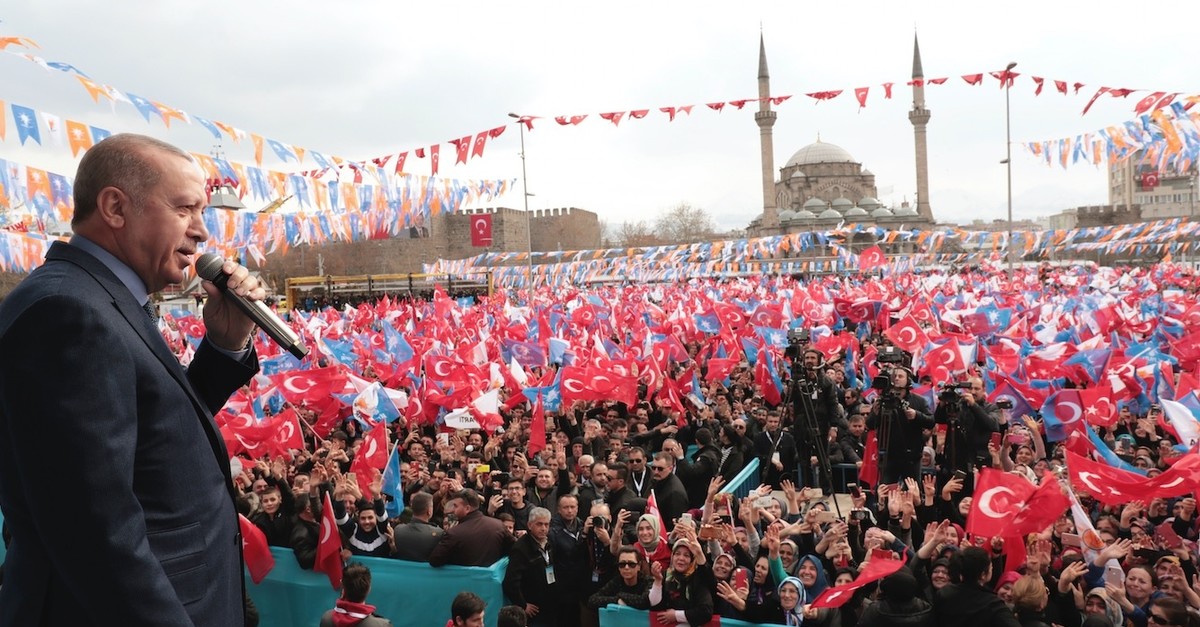 President Recep Tayyip Erdoğan reiterated his criticism concerning the claimed-cooperation between the main opposition Republican People's Party (CHP) and the pro-PKK Peoples' Democratic Party (HDP) on Sunday, saying that this is an alliance with the those "who want to divide the country."

Speaking at a rally in the central Anatolian province of Kayseri, a Justice and Development Party (AK Party) stronghold, Erdoğan pointed to the HDP leaders' remarks regarding supporting their own party's candidates in "Kurdistan," referring to the eastern Anatolian provinces. "Is there a region in Turkey called Kurdistan?" Erdoğan asked, "No, there is not. How can the CHP and İP [Good Party] partner with those who want to divide the country?"

The HDP announced previously that it would not nominate mayoral candidates in seven major municipalities, including Istanbul, İzmir and Ankara, in the upcoming municipal elections. The decision raised questions about a possible secret alliance between the CHP and the HDP, both parties refuted such claims.

The CHP has refrained from officially including the HDP, which has been condemned for its close ties with the PKK, in the Nation Alliance, which is an electoral alliance with the İP, amid fears of a possible backlash from its secular-nationalist voter base. In the June 24, 2018 general elections, however, the CHP urged its voter base to vote for the HDP to stop the AK Party from having a single majority.

The Turkish government has long accused the HDP of close links with the PKK. The HDP is known for its support of autonomy in regions where large Kurdish populations live. Some of its members have also been charged or accused of having links to the PKK terrorist organization. Its former co-leader, Selahattin Demirtaş, was arrested in November 2016 over terrorist propaganda. Many of its members have often voiced overt support for the PKK.

Mentioning the People's Alliance that was formed with the Nationalist Movement Party (MHP), Erdoğan said that the alliance actually has its roots in the country's history, times when there was a national struggle against occupiers in the post-World War I period. Erdoğan said that the People's Alliance is the coming together of people who shared the same desires and aims at that time.

The People's Alliance between the MHP and the AK Party was formed ahead of the June 24 parliamentary and presidential elections. The alliance received a majority in Parliament, while their presidential candidate, Erdoğan, also won the election by 52.6 percent of the vote. Since both parties consider the results of the June 24 elections as successful, they now seek to continue their alliance in the local elections.

"However, the CHP, and unfortunately the İP, preferred to side with those who refrain from saying our national anthem," he underlined.

"Let's give them a lesson in the March 31 local elections," Erdoğan urged people.

Regarding investments in Kayseri during AK Party rule, Erdoğan said that TL 26 billion has been invested in the province so far.

"The third-largest state university in the country, Erciyes University, was founded by us. We are opening three more dormitories to the existing ones. We have also opened youth centers and sports complexes," he said.

"A people's garden will be formed in Kayseri. Everyone is welcome to visit the gardens," Erdoğan said.

"We will also make a people's coffeehouse, especially for youth, that will be open for the youth for 24 hours. They will eat cake, drink tea and work on their lessons," he said.

Erdoğan added that they, as AK Party, have built 45 new facilities in Kayseri, including Kayseri city hospital, which has the capacity to host 1,607 patients and that six other health facilities' are being constructed.

"Some 122 historical places have been restored. Several high-speed train projects for Kayseri have been going on," Erdoğan said.

As far as agricultural investments are concerned, Erdoğan said that six irrigation facilities have been built in the province, while TL 1.5 billion in support has been provided to farmers in Kayseri. "We have also built eight dams in Kayseri," the president added.