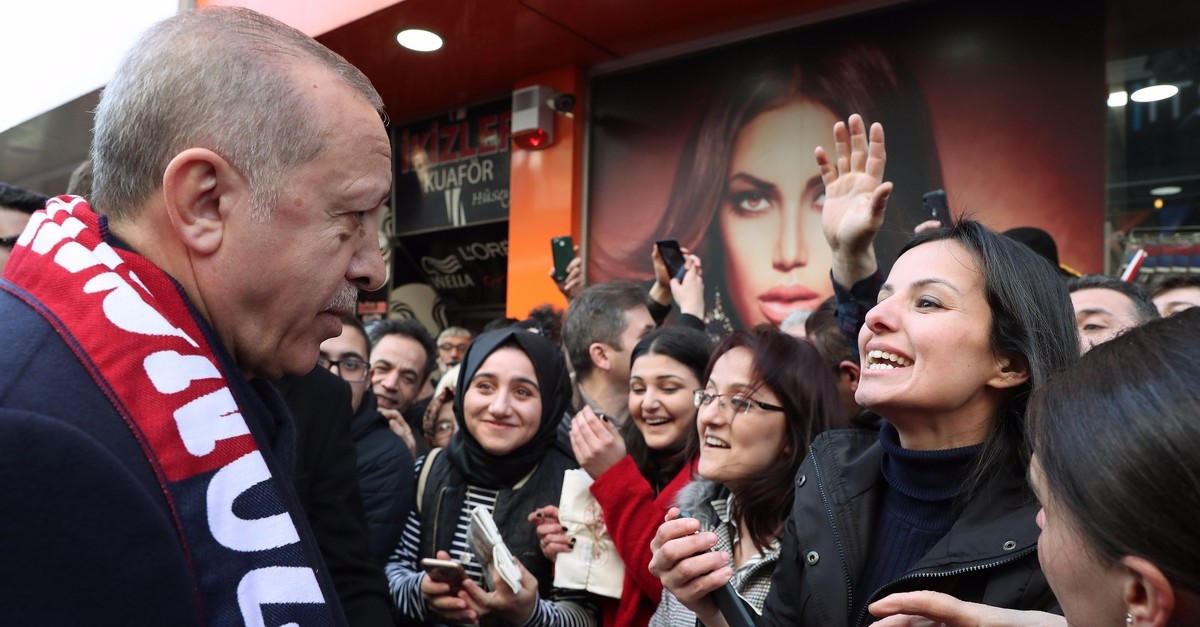 What brings together several opposing parties under one alliance is their common stance against Turkey's 2023 development goals, President Erdoğan said Monday

With less than a month left for the local elections, President Recep Tayyip Erdoğan continued his campaign as chairman of the ruling Justice and Development Party (AK Party) with rallies in northern Zonguldak and Bartın province, where he accused the opposition alliance of trying to block the country's 2023 vision. "Do you know what it is that brings together those who wouldn't even greet each other if their roads crossed?" Erdoğan asked, referring to the opposition Nation Alliance, formed by the main opposition Republican People's Party (CHP) and the far-right Good Party (İP). "They are seemingly in an alliance against the People's Alliance and joined together against me. However, what actually brings them together is that they are afraid of the power Turkey will have when the country reaches its 2023 goals," the president said.

The People's Alliance he was referring to is formed by his AK Party and the Nationalist Movement Party (MHP).

Marking the centenary of the Republic of Turkey, the 2023 Vision includes specific targets for a full-fledged improvement of the country's economy via tailor-made energy, health care, transport and infrastructure projects to make Turkey one of the top 10 global economies.

Erdoğan has long criticized the Nation Alliance, accusing the CHP and İP of being supported by the PKK and the Gülenist Terror Group (FETÖ). The president also says the CHP has the support of the pro-PKK Peoples' Democratic Party (HDP) for the upcoming elections, a party which has failed to acknowledge the PKK as a terrorist group.

"The party [HDP] under control of the separatist group [PKK] did not nominate mayoral candidates in many municipalities. They are supporting CHP's candidates. Similarly, they are discussing how to share the administrations in many municipalities," Erdoğan said, and added that the people, "particularly the CHP voters" will teach a lesson to "those who put CHP to the situation it is in today."

The HDP is known for its support of autonomy in regions where large Kurdish populations live. Some of its members have also been charged or accused of having links to the PKK terrorist organization. Its former co-leader, Selahattin Demirtaş, was arrested in November 2016 over terrorist propaganda. Many of its members have often voiced overt support for the PKK.

The HDP announced previously that it would not nominate mayoral candidates in seven major municipalities, including Istanbul, İzmir and Ankara. The decision raised questions about a possible secret alliance between the CHP and the HDP; both parties have denied such claims.

"We need a national stance in politics. You cannot do politics with those counting on terrorist groups," the president said.

The AK Party chairman continued, and also played video clips showing HDP officials declaring their support for the PKK, he said Turkey will not let any terrorist groups survive within the country's borders and that they will be eliminated sooner or later. The president pointed to an HDP official's remarks about supporting their own party's candidates in "Kurdistan," during a joint event with CHP's mayoral candidate in Istanbul's Şişli district. "Is there a region in Turkey called Kurdistan?" Erdoğan asked, "No, there is not."

"If you really want a Kurdistan, there is one in northern Iraq, goodbye to you. There is no such region in Turkey," the president said. The president called on voters to support his party during speeches in both Zonguldak and Bartın, saying the opposition parties have failed to put forward projects needed for the municipalities and the people.

Ahead of the June 24 presidential and parliamentary elections last year, the AK Party and the Nationalist Movement Party had formed the People's Alliance, and it has continued for the March 31 elections. The alliance received a majority in Parliament, while their presidential candidate, Erdoğan, also won the election with 52.6 percent of the vote.