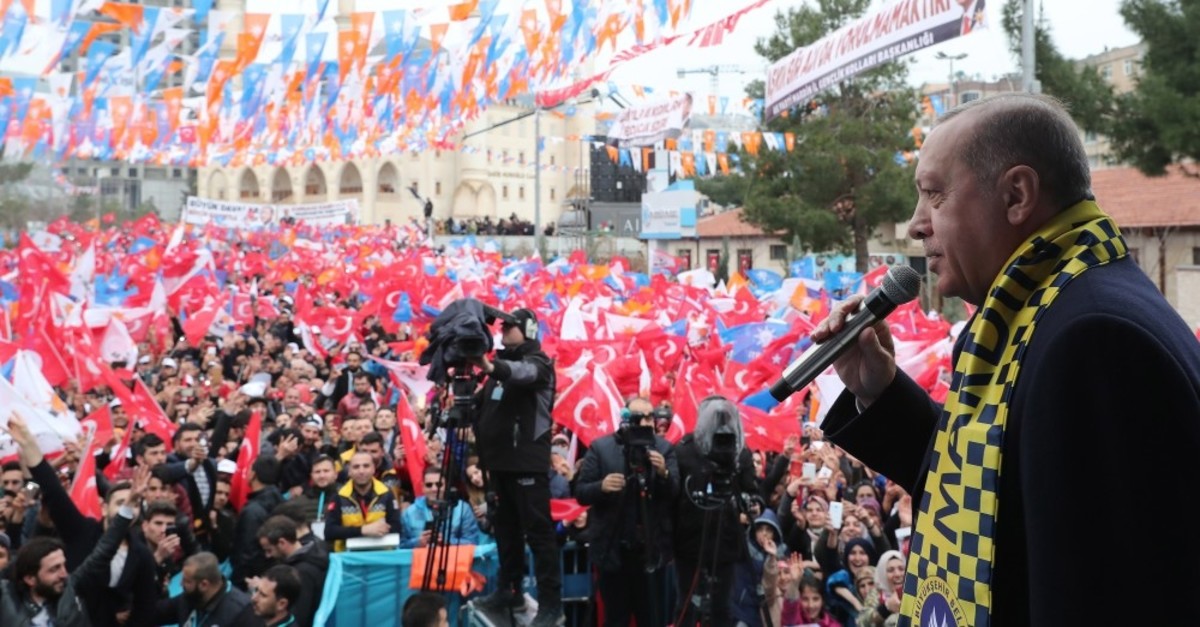 He said that the HDP, despite holding offices for years, have little to no achievements in terms of development and services.

Speaking at a rally in southeastern Turkey's Mardin, Erdoğan said although HDP-affiliated figures have been mayors of the province, it is hard to see any of their achievements.

"Didn't these [HDP figures] become mayors here? There are no services from them. You can clearly see how Mardin has [positively] changed after the municipality has been transferred to the trustee," said the president, adding that while the HDP was digging ditches in the city, the AK Party came to the forefront with its services.

The HDP mayors have also been accused of undermining municipal services, allowing the PKK to dig ditches on the streets and launch attacks on police and soldiers. As a result, Turkey removed the elected administrations of 93 municipalities in the region for their links to the PKK terrorist group and appointed trustees to these municipalities in 2016.

In the trustee-run municipalities, damaged infrastructure for drinking water, wastewater and sanitation has been repaired and new infrastructure has been built. Extensive construction work was undertaken by the trustees to revive the PKK-ravaged southeastern provinces.

The Mardin municipality was under HDP rule from 2014 to 2016. Ahmet Türk, a senior HDP figure, was elected as the mayor of the province in the 2014 local elections as an independent candidate. Following the party's actions alongside PKK terrorists and the HDP municipality's support for it, a trustee was appointed to his post in 2016.

"We have made TL 28 billion worth of investment in Mardin in the last 17 years. We have founded the Artuklu University. These could not be achieved with the HDP, which supports the terrorists," he added.

Erdoğan said that the AK Party government rebuilt the structures in the province that were damaged during the HDP's destructive ditch digging activities.

"We have rebuilt 240 kilometers of roads which were damaged because of [the HDP's] ditches," he said, adding that Mardin will be connected to Ankara and Istanbul via the high-speed train project.

"Some 332,000 local tourists visited Mardin last year. When you remove terrorism, tourists flow into the city," Erdoğan said. He added that the number of tourists will further increase in the upcoming period.

The Turkish government has long accused the HDP of close links with the PKK. The HDP is known for its support of autonomy in the regions where large Kurdish populations live. Also, some of its members have been charged or accused of having links to the terrorist organization. Its former co-leader, Selahattin Demirtaş, was arrested in November 2016 over terrorist propaganda.

Formed in 1978, the PKK terrorist group has been fighting the Turkish government for an independent state. Its terror campaign has caused the deaths of more than 40,000 people including children, women and elderly people. The PKK is listed as a terrorist organization by Turkey, the U.S. and the EU.