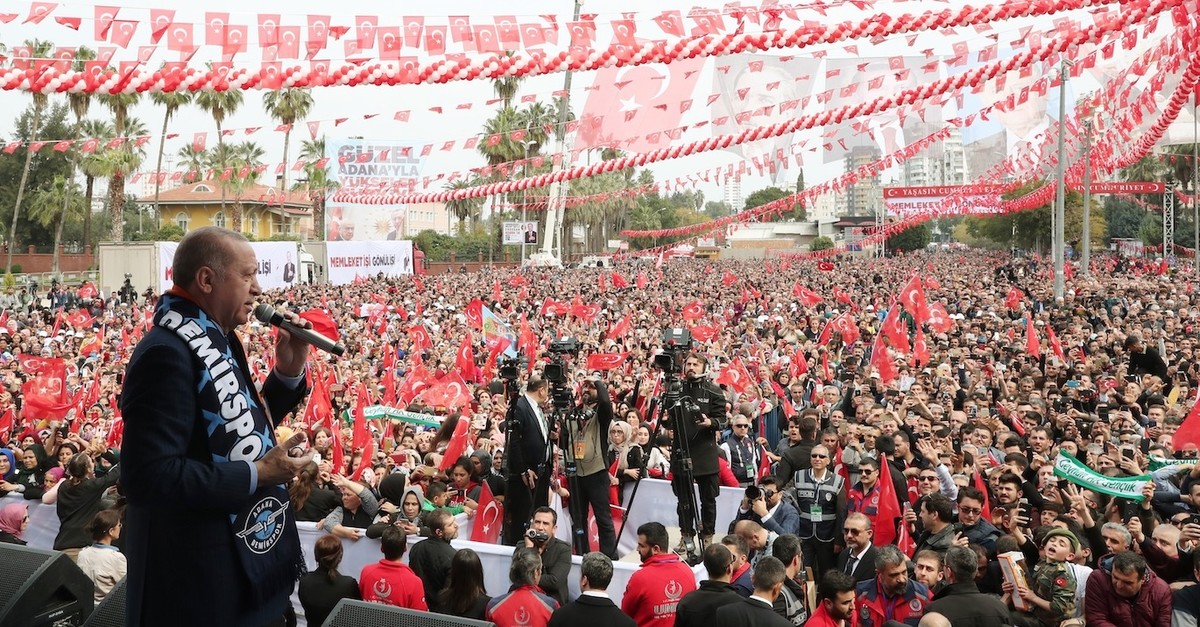 The alliance between the AK Party and the MHP is not about seeking political advantages but the result of a joint stance against those who want to harm the country, the president said

The People's Alliance between the ruling Justice and Development Party (AK Party) and the Nationalist Movement Party (MHP) is not formed for one day out of a concern to gain a benefit, rather it was formed to last until the end, out of a convergence for the same cause, President Recep Tayyip Erdoğan said Sunday at a rally in southern Adana province.

Erdoğan said that the People's Alliance emerged in the streets, following a joint stance against the coup plotters during the July 15, 2016 coup attempt.

Ahead of the June 24 presidential and parliamentary elections last year, the AK Party and MHP had formed the People's Alliance, and it's still in place for the March 31 elections. The alliance received a majority in Parliament, while their presidential candidate, Erdoğan, also won the election with 52.6 percent of the vote.

The coup attempt in 2016 killed 250 people and was quelled thanks to strong public resistance. Thousands of people were arrested or detained for their roles in the coup attempt that was plotted by the Gülenist Terror Group's (FETÖ) point men controlling the infiltrators in the Turkish Armed Forces (TSK), according to prosecutors.

"We have formed this alliance to continue our struggle with more strength against the ones who want to harm our nation. This alliance will continue till we reach our 2023 goals," Erdoğan underlined.

Marking the centenary of the Republic of Turkey, the 2023 Vision includes specific targets for full-fledged improvement of the country's economy via tailor-made energy, health care, transport and infrastructure projects to make Turkey one of the top 10 global economies.

Erdoğan has long criticized the Nation Alliance, the major opponent of the People's Alliance that is formed by main opposition Republican People's Party (CHP) and Good Party (İP), accusing the two parties of being supported by the PKK and the FETÖ.

The president also says the CHP has the support of the pro-PKK Peoples' Democratic Party (HDP), a party which has failed to acknowledge the PKK as a terrorist group.

"There are some values that one cannot respect to the ones who attack them. It is our debt of honor to be against the ones who are the enemies of the nation, the flag, the motherland and the state," he expressed while highlighting that this is not a matter of politics but a matter of honor.

Reminding the audience that there are only 21 days left till the March 31 local elections, the president said that these elections are about "survival," and their aim is not to win over a few more municipalities but to defend the country against the people who want to destroy its values.

"Together with our nation, we will continue to fight against the ones who set their eyes on our flag, which represents our liberty, till the last drop of our blood, whether they are FETÖ or the PKK," Erdoğan further underscored.

Formed in 1978, the PKK terrorist group has been fighting the Turkish government for an independent state. Its terror campaign has caused the deaths of more than 40,000 people, including children, women and elderly. The PKK is listed as a terrorist organization by Turkey, the U.S. and the EU.

In terms of the AK Party government's investments in Adana, Erdoğan said that a total of TL 45 billion worth of investment has been made in the province and these investments will continue following the elections as well.

"In education, we've built 9,157 classrooms. We have founded Alparslan Türkeş University in our city [Adana] where there are more than 58,000 students. We have opened dormitories for university students," Erdoğan added.

In the field of health, on the other hand, the president said that TL 5 billion was invested into the health sector in Adana during the AK Party government's rule.

"We have built 56 health facilities. The Adana City Hospital is in service with the capacity of hosting 1,550 patients at once," he said. "We have renovated the railway between Adana and Mersin. The time of travel has been shortened. The Adana-Gaziantep high-speed train project is also about to be completed. It will be ready in two years."

Following his rally in Adana, Erdoğan moved on to another southern province, Mersin.