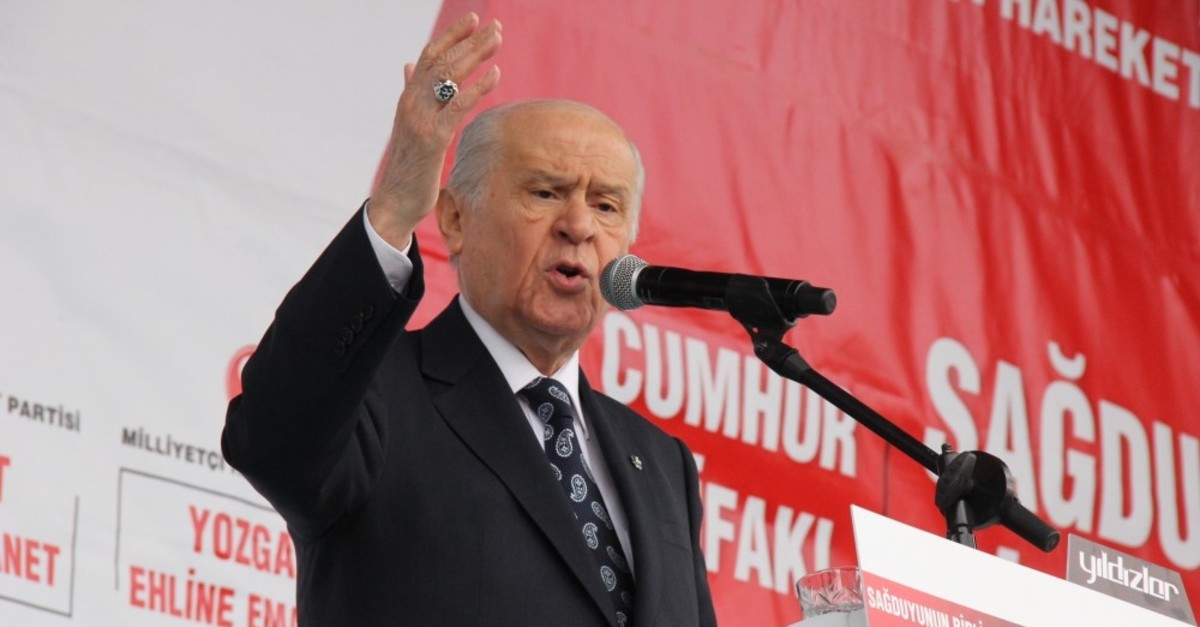 The People's Alliance is ready to welcome CHP voters, whose party has been siding with PKK terrorists, said the leader of the MHP

The leader of the Nationalist Movement Party (MHP) Devlet Bahçeli said yesterday that the People's Alliance is ready to welcome Republican People's Party (CHP) voters who are disturbed with their party's policies on the PKK.

"It is an embarrassment to see that [Mustafa Kemal] Atatürk's [founder of the Turkish Republic] party is collaborating with the PKK. This is my call to the dignified CHP voters: The People's Alliance will embrace you too," Bahçeli told a meeting in central Turkey's Yozgat.

The People's Alliance was formed by the ruling Justice and Development Party (AK Party) and the MHP before the June 24 elections last year. They are entering the March 31 local elections with joint candidates in different provinces. They will take on the candidates of the Nation Alliance, formed by the CHP and the far-right Good Party (İP).

Bahçeli also made a call to party dissidents, who feel regretful for leaving the party, saying that MHP's doors were open if they wished to return.

The MHP lost some of its members following a legal and leadership battle in the party that began after the Nov. 1, 2015 elections, where the party barely crossed the 10 percent threshold and lost half of its deputies from the elections held earlier on June 7.

In October 2017, the İP was founded by MHP dissidents under the leadership of Meral Akşener.

Bahçeli also pointed to the threats posed by the PKK's Syrian offshoot the People's Protection Units (YPG), and criticized CHP leader Kemal Kılıçdaroğlu's remarks suggesting that the "YPG would not attack Turkey."

"While the CHP leader whitewashes the YPG, we are decisive to destroy terrorists," he said.

The CHP's Kılıçdaroğlu has been accused by many party members, as well as the right-wing electorate of Turkey, for excluding nationalist figures from the party's high echelons, since he took the post in 2009. Under Kılıçdaroğlu's rule, the profile of decision-making mechanisms and party organizations has changed drastically; many veteran nationalist CHP figures were marginalized and replaced by people close to leftist movements.

The CHP has refrained from officially including the pro-PKK Peoples' Democratic Party (HDP), which has been condemned for its close ties with the PKK, in its electoral alliance with the İP amid fears of a possible backlash from its secular-nationalist voter base. Yet, the recently announced candidate lists for the upcoming elections unveiled the scope of cooperation between the CHP and the HDP, which led to harsh reactions from within its own party organization.

Pointing out that Turkey has been facing a lot of internal and external threats, the MHP leader said Turkey's future depends on the success of the People's Alliance in the local elections. "We will not allow those who want to prevent Turkey's rise," he said.

As the June 24 presidential and parliamentary elections, last year witnessed the alliance's success, the AK Party and the MHP seek to carry this momentum forward in the local elections.